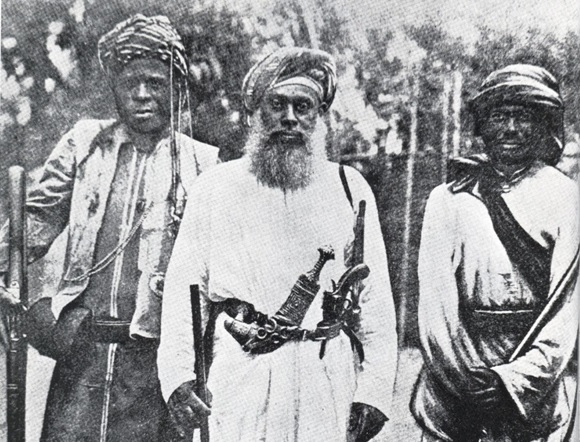 Abushiri and Bwana Heri resistance was a small scale resistance which occurred along the coastal region of Tanganyika where by rich Arabs and local traders organized to fight against the British and the German interference on their trade in 1888 -1889.

Abushiri and Bwana Heri resistance was among of strong small scale resistance since they organized their strong forces against German by hoisting the German flag in all coastal towns.

Due to this the British decided to join with German and started to interfere the Abushiri and Bwana Heri’s trade and production of coconut and cereal plantations which depended also on the slave trade activities by the German and the British utilizing their naval forces to suppress slave trade in Indian ocean.

As a result the German chancellor sent a Germany commander solider Von Wisman so as to recruit mercenaries [soldiers] to suppress Abushiri’s forces.

Due to that Abushiri’s forces were defeated hence Abushiri decided to fled to Mpwapwa when he was captured and publicly hanged on 15th December 1889 after being betrayed by a village headman of Usangara known as Magaya a Jumbe.

Was another coastal people’s resistance which came after the failure of Abushiri resistance organized by Bwana Heri of Uzigua against Germany forces.

Introduction of taxes which were imposed by Germany

To avoid interference in

Makunganya resistance was another coastal Tanganyika small scale resistance which were fought between Hassan bin Omar Makunganya against Germany in 1894 after Bwana Heri being defeated, surrendered and run away.

Makunganya resistance did not last for a long time since Makunganya was defeated hence found hanged himself on a mango tree in November 1894 in KilwaKivinje.

This mango tree was known as mwembekinyonga since it was used to hang all people who committed a crime and disobeyed the government’s orders.

THE COLD WAR
THE COLD WAR This article is about the general term for ...