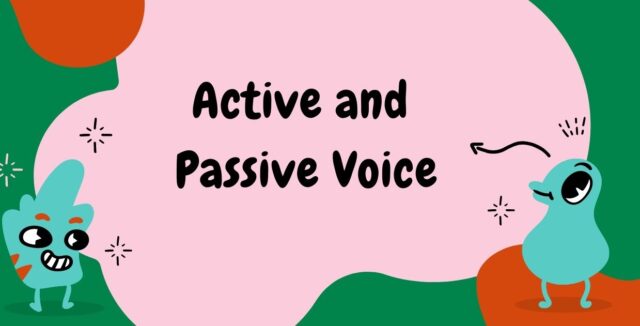 Voice is the form of a verb that shows whether the subject of a sentence performs the action (the active voice) or is affected by it (the passive voice).

A sentence is said to be in active voice when we are interested in the doer of an action.

In an active sentence, the subject of the sentence acts. It emphasizes the doer of the action.

It establishes a clear, strong relationship between the subject and the verb.

The teacher lost my book.

(The loss is clearly due to the teacher’s carelessness)

Using an active or passive verb allows a subtle but significant shift in meaning and emphasis.

In a passive sentence, the subject of the sentence is acted upon. A passive verb requires auxiliaries.

In some cases a passive sentence does not specify the person or thing completing the action, when it does; the person is named in a prepositional phrase beginning with by.

When the results of the action are more important than the doer or when the doer is unknown, passive sentences effectively express the meaning.

The teacher was challenged to prove his thesis.

The teacher was challenged to prove his thesis (by students).

Some guidelines in changing active voice into passive voice.

A book was written by Marwa

A shirt was stolen.

A letter was written by Jane.

OMISSION OF THE OBJECT IN PASSIVE VOICE.

In some sentences the object of the verb is omitted since the agent of the action is either a well known person or unidentified.

It is not mandatory therefore to mention the agent of the action. The passive form is more effective when we want to emphasize on the activity not the agent.

The robbers have been arrested. (by the police)

The student was punished. (by the teacher)

(Here the agents are well known)

My book was stolen. (by someone)

His leg was hurt. (by something)

(Here the agents are unidentified or not recognised)

A transitive verb may sometimes followed by two objects. In such cases, the sentence may have two passive forms.

Jane gave me the book.

The book was given to me by Jane.

I was given the book by Jane

The manager offered him the job.

The job was offered to him by the manager.

He was offered the job by the manager.

She cooked them a nice food.

A nice food was cooked for them by her.

They were cooked a nice food by her.

Certain verbs are always followed by prepositions. So a preposition after the verb must be retained in passive voice.

They laughed at the visitor.

The visitor was laughed at by them.

She cares for the poor.

The poor are cared for by her.

Africa was scrambled for by Europeans.

We are waiting for the president.

The president is being waited for by us.

However, various ideas such as commands/ orders/ requests may be expressed in Passive voice.

Alternatively, imperative sentences can be turned into passive constructions by using “let”

Questions are rarely made in passive construction although all questions can be changed into passive voice.

It is advised that active voice should be used when making questions.

USES OF THE PASSIVE VOICE

She has been impregnated (by whom?)

The food has been eaten (by?)

The book was taken (by someone)

The picture has been stolen (by somebody)

A Few drops of Sulphuric acid were added and heated for ten minutes.

It was concluded that, when the mixture of iron and sulphur is heated in a test tube it glows and a black solid iron (II) sulphide is formed.

You will be informed soon. (by?)

It will be solved next week. (By?)

My daughter has been impregnated by your son.

She was raped yesterday by her own father

She was killed by her husband

Fill in the blank spaces by choosing the suitable phrase from the list below.

B: I don’t know, but it must……….by someone who lives here, because they know so much about it.

5)   After our party, there were plates and glasses everywhere. One plate ……..on top of the big bookcase – by somebody tall probably.

6)   The winner of the competition should…………last week, but one of the judges was ill, so it wasn’t.

7)   We stopped outside a tiny restaurant to look at the menu in the window but we couldn’t read it. It……….in pencil and in very small handwriting.

8)   Some scientists believe that the climate of the world………by the burning of oil, gas, coal and wood.

9)   While the film……., two actors quarreled with the director and left.