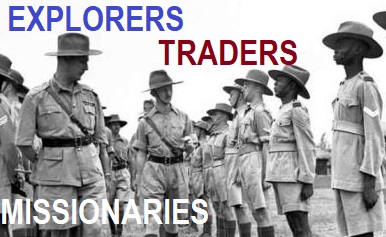 Agents of industrial capitalism were the Europeans who penetrated in Africa to prepare the Africans to meet the industrial demands such as raw material, markets for manufactured goods, areas for investments and cheap labourers in the 19th century.

Explorers were the first group of forerunners which penetrated to Africa and explored (searched for) various potential information about Africa and revealed them to their governments. They came in Africa around the 19th century.

The prominent explores were:

Explorers wrote reports, books and speeches which campaigned for the colonization of Africa.

ROLES OF EXPLORERS IN THE COLONIZATION OF AFRICA

1. They were to explore (search) potential areas in African. For example the availability of resources like good climatic conditions, topography, lakes, soil fertility, big rivers and animal species in Africa For example Clapperton reported about the river Niger to the British government while Speke reported about the potentiality of Lake Victoria and named it Victoria to honor Queen Victoria of the United Kingdom.

2. They provided important information about the nature of African societies: They reported about the hostility, calmness and hospitality of the African people. This information played a central role for the European colonialists during the decision making process regarding the colonization of Africa.

3. They provided messages to their government about the existing evils of slave trade and the areas where slave trade was still conducted: Dr. Livingstone’s third journey through Tanganyika and Lake Regions of central Africa was targeted for that as a result he informed the English that the Yao’s land was still characterized by slave raids and the effects of slave trade such as sufferings, insecurity.

4. They appealed their home government to come to occupy the areas In Arica. For example in 1856, Dr. Livingstone proposed establishment of British colony in the heart of Central Africa and Britain responded by colonizing Central Africa

5. They signed bogus treaties friendly with African local rulers that provided the basis of colonization of Africa

6. They learnt native languages in order to cope with their intended mission

7. They opened up investment opportunities by preparing the Africans psychologically to accept and appreciate the white men’s economy.

Missionaries were the second group of fore runner’s who came to Africa with the mission of spreading the Christianity and Western civilizations.

Missionaries came to Africa under the support of their missionary societies in Europe.

Examples of such societies in Africa include:

Church of Scotland Mission worked in Calabar in Nigeria

The prominent Missionaries were:

ROLE PLAYED BY MISSIONARIES IN THE COLONISATION OF AFRICA

1. They acted as interpreters and propagandists at the time of treaty making by learning tradition languages: John Moffat stayed among the Ndebele for about 30 years serving the British South African company (B.S.A.C) for treaty making between the companies (B.S.A.C) and King Lobengula.

2. They acted as advisors to African chiefs: The British missionaries of the church missionary society convinced Kabaka to accept protectorate.

3. They introduced Western civilization to the interior through education and schools: This aimed to prepare people of low ranks to serving colonial masters at the time of colonization.

4. Missionaries softened the minds and the hearts of Africans: Their activities were influenced by European imperialists’ interests by preaching and emphasizing the spiritual beliefs such as “give to God what which belongs to God,” and “give to Ceaser what belongs to Ceaser”. In the long run this preaching weakened African opposition and shaped the regions for future colonial administration.

5. They converted Africans to Christianity: They were easily employed as puppets to extend colonial rule. Typical examples are the converts of Sierra Leone, Nigeria and Ghana who were able to protect the British economic interests and paved the way for future colonization by the British.

6. Missionaries reduced resistance among African societies: This was done by converting some societies and preaching obedience to administrators.

7. They helped in the abolition of slave trade: They planned for successful Christianization of the freed slaves as they preached the word of God. They wanted to create the conducive and peaceful environment for the development of legitimate trade which was exploitative in nature and was after capitalist’s interests.

9. They signed bogus treaties with the African rulers example John Moffat signed a treaty with King Lobengula over Ndebele land

Traders were the last people (agents) who came to Africa with a mission of trading with Africans. They brought manufactured goods such as clothes and guns to exchange them for gold, ivory, cotton and animal hides in many areas. When they come they formed trading companies in many parts of Africa.

The prominent traders in Africa were:

ROLE PLAYED BY TRADERS IN THE COLONISATION OF AFRICA

1. They opened a new an exploitative system: Therefore, Africa became the target for European interests. This resulted in stiff rivalries and competition among European industrial nations.

2. Introduction of circuit through legitimate trade: This involved the importation of European manufactured goods. Thus, the chain of dependence was created and the African local industries and the arts were destroyed.

3. Traders exposed Africa to the world capitalist system of economy: The use of currency, banking and credit facilities began to be witnessed by Africans. This resulted into exploitation of African resources. The fair and quick turns obtained by traders attracted European colonialists to come into Africa.

4. They opened communication systems such as roads: This laid the foundation for future colonial infrastructure. For example, the road from Lake Nyasa to Tanganyika known as Livingstone road was opened by traders and was used during the colonial administration.

5. They carried out trade in Africa. European traders brought manufactured goods from their countries to Africa. Africans relied on importing goods like clothes from Europe instead of weaving their own cloth, hence created dependency of Africans to Europeans.

6. Traders signed treaties with local leaders; the aims were to prepare the areas to be ready for the white rule. One example was a treaty signed between Harry Johnston and chief Mandara of Uchagga in 1884 to control thirteen square kilometers of land in Kilimanjaro. Also Dr. Carl Peters of the society for German colonization signed treaties with a number of chief between Pangani and Rufiji. These treaties were later used by the German government to control Tanganyika.