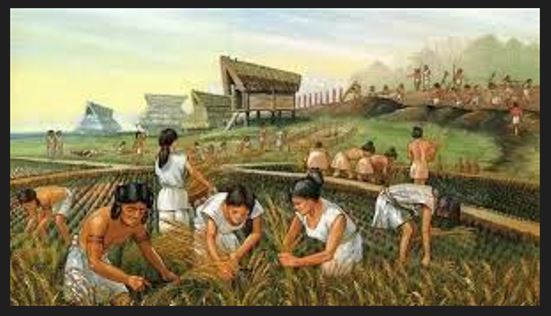 Agrarian revolution refers to the rapid changes which occurred in agriculture sector. The changes were accompanied by the application of science and technology. In Britain, agriculture revolution happened between the 16th Century and 18th Century.

Most of the land was also left fallow ie the large part of the land was not under farming. In addition to low production in agricultural the majority of population in pre-agranal revolution.

This is the drastic change in agricultural production through better technique, methods and land tenure. It started in 1450 -1750 but reached maturity in 1801. Agranian revolution started in Netherland-Holland and later English.

The changes in agricultural production were caused mainly by two factors:

1. The first cause was the rapid increase of population. The large population necessitated the changes in the methods on producing crops and animals so as to cope with the high demand of force from the populate.

The agrarian revolution in Britian entailed the following changes

One example of farmer who in 1730 grew fodder crops in rotation with other crops was lord Town shed. The second change was the introduction of new crops in Britian crops such as maize, sweat potatoes and fodder crops were introduced in England from the Americans.

The introduction fodder crops led to the constant supply of meat throughout the year because the presence of fodder crops made it possible to make bay for use during writer. This was sharp departure from the pre-agrarian revolution error when all the cattle and other animals were slaughetered during writer for lack of feed.

The use of improved farm instrument. Examples of instruments which were used included iron plough and Jethro Tull’s seed drill. Extensive use of time to neutralize soil acidity. In addition to liming, farmers applied fertilizers in their farms.

In order to get more arable land big farmers embarked on draining swam ply land, for example: King Charles I of England financed a Dutch expert- Cornelius Vermigden-to drain Yorkshire and Cambridge shire. Irrigation also practiced during the agricultural revolution. Another aspect of the agrarian revolution was the improvement in animal breeding. Better horses, cattle and sheep were raised.

It was during the agrarian revolution that farmerskept animals for multipurpose. For example, a farmer in Leicester called Bake well produced a large quantities of beef and mutton to feed millions of people. The agrarian revolution involved the evection of serfs and peasants from the land for pasture i.e. Enclosure of the land.

HOW AGRARIAN REVOLUTION LED TO THE CAPITALISM IN EUROPE

The agrarian revolution had a number of contributions to the rise capitalism in Europe.

Many serfs and peasants who were evicted from the land for commercial sheep farming (enclosure) were employed in factories in towns and cities. The agricultural changes also provided market to the industrial manufactured items. In other words, agricultural entrepreneur bought industrial goods needed in agricultural sector. The change in agriculture supplied raw material needed in industries.

One important raw material the agrarian revolution provided to textile industries was wool. Farmers kept sheep commercially for selling wool-wool come from sheep-to industries. In industries the farmers accumulated capital which they invested in industries and trade. The agricultural revolution also marked the end of small scale or peasant production. The peasant production was replaced by the capitalist farmers.

This means consolidation of scattered enable land and common land into a simple compact area of land that is fenced.

2. Enclosure of landlords between 1475 –1570. This was the period when there was an increase of wool demand due to the expansion of wool.

3. Enclosure of land into strips. This was done by purchasing land from the farmers or owners.

Impacts of the introduction of the Enclosure System in Britain

i. Freeing of labours from land. Labours were free to sell their labour under their own discretions.

iii. Peasants were deprived of the right to own land (common land)

iv. Labours were turned to commodities.

v. Rise of unemployment due to emergence of landless people

vi. Made capitalist to own both rural and urban economy (industries and agriculture)

vii. Led to the rise of proletariats.