Home ENGLISH LANGUAGE ARTICLES (A, AN & THE) 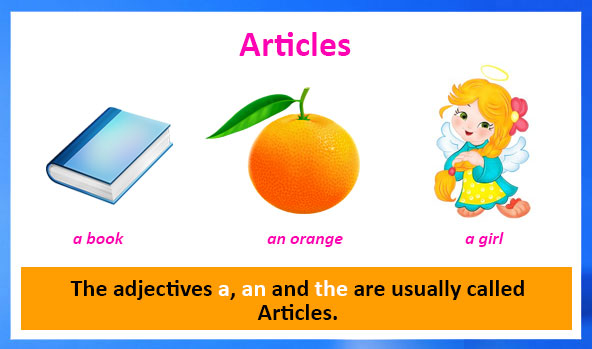 Articles are words that used together with nouns or adjectives.  They are regarded as a class of determiner and not a word class. The articles normally in most cases are placed before a noun.

Example of articles are a, an, the and zero articles.

2. In some cases Articles used before Adjective + Common noun

1. Articles is used to clarify the Noun (i.e to make noun clear with reference to the given context).

(i) The sun (i.e article the used to specify that there is only one sun)

(ii)  A boy  (i.e A used to suggest that boy is unknown or there is only

2. Articles is used to express which particular items are referred to a given context

(i)  The tiger (i.e article the used to denote the idea of a class of animals)

3. Articles is used to express the specific things from the general one

(i)  The boy (i.e the used to express the idea that the boy is well known by everyone)

(ii) A boy (i.e A used to express the idea that the boy is not well

There are three main types of articles

Those are articles that express the idea that the given noun is known from the given context. Definite articles express things, place or person that is clear to us.

Definite article is The

USES OF DEFINIT ARTICLES (THE)

Sometime preposition in is used

Are those articles that express the idea that the given noun is unknown from the given context.

Examples of Idefinite article are a and an

USES OF IDEFINITE ARTICLES (A and AN)

(i) I bought a radio.  The radio was so good

NB:      AN is used together with any noun start with vowel sound and silent h sound.  These general rules do not reflect the beginning letters or spelling of the noun but the beginning sound.

Supply suitable article in the space provided either by using a, an  or the

10. Let us report the news to____P.C.C.B institution for further investigation.

Supply either zero article in the spce or other types of articles i.e an, a, the