Democracy is the system of governance and leadership in which the supreme power belongs to the people.

Abraham Lincoln the former president of the USA defined democracy as the government of the people by the people and for the people.

Of the people means that power belongs to the people,

For the people means that the govt/representatives should lead for the interests of all people.

There are two main types of democracy;

Is a type of democracy whereby people participate directly in making decisions.

– It was firstly practiced in the Greek city states between 5th and 4th centuries BC.

Is the type of democracy whereby people are represented by the few in making decisions.

1. Citizen participation. It means involvement of citizens in different affairs like voting and contesting in elections.

2. Equality – all people are equal despite their differences in colour, religion, sex, ethnicity etc.

10. Economic freedom – people are free to involve in economic activities of their choices.

11. Accepting the result of elections. 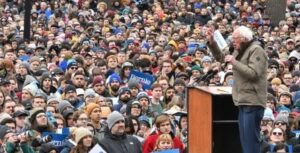 THE IMPLEMENTATION OF DEMOCRACY IN TANZANIA

1. Presence of political freedom e.g. people are free to vote and contest for various leadership positions as well as to join political parties they wish.

2. Presence of free and fair election e.g. election involve all adult population and are held after every five years.

3. No discrimination in Tanzania – laws and laws enforcing authorities treat all people equally.

4. Multipartism – to give people more political freedom and widen democracy.

5. Rule of law is followed – all people are equal before the law. No one is above it.

6. There is equality before the law.

7. There are periodic elections and peaceful exchange of government after every five years.

1. Multiparty democracy is a political system whereby many political parties operate legally in a country.

2. Political party is a group of people legally organized for the purpose of forming a government.

3. Before independence, Tanganyika and Zanzibar had multiparty democracy.

6. In 1965 Tanzania introduced monoparty system in the country.

Now we have about 17 political parties some of which are;

1. Election is a process of choosing a person by vote especially for political position.

2. What are democratic elections?

Are elections where participants are treated equally, electoral laws are fair to all contestants and there is political tolerance.

The following are the indicators of democratic elections;

(i) Free and fair election campaigns.

(ii) All political parties should be given equal opportunities.

(iii) Codes of ethics for elections should be followed.

(i) Democratic elections help the country to get the acceptable government.

(iii) Elections ensure accountability of leaders to the people.

(v) They ensure peace in the country.

FREE AND FAIR ELECTION IN TANZANIA

The following are some of indicators of free and fair elections in Tanzania;

(a) Elections are held after five years

(c) Every citizen has right to involve in elections. Either by voting or contesting in various positions.

(e) There is political tolerance.

Candidates are citizens who contest a seat.

I. CONDITIONS FOR PRESIDENTIAL CANDIDATE

(b) Have attained the age of 40 years and above.

(c) Be a member of and a candidate nominated by a political party.

(e) Be nominated by 200 supporters who are registered members from ten regions two of which must be in Zanzibar.

(b) Be able to read and write in Kiswahili and English.

(c) Be a member sponsored by a political party.

(e) Not have been convicted for the offence of evading tax.

(a) Be a citizen of Tanzania.

(d) Be a person of sound mind.

The organ that is responsible for supervising general elections in Tanzania is National Electoral Commission (NEC). It is chaired by its chair person appointed by the president. Currently, its chair person is Mr. Daminian Lubuva.

The main duties of NEC are to;

(i) Supervise registration of voters

(iv) To announce the date of election.

THE SPIRIT OF TOLERANCE

(i) Before election there is voters’ registration.

(ii) Registration is the process of being identified as a voter.

(i) Polling day is the day on which people vote in elections.

– Votes are counted before the political parties’ agents, neutral members and sometimes before the international observers.

(i) All results from the constituency are announced by the area returning officer.

(ii) Results for presidential election are announced by the chairperson of NEC.

By election is an election held to fill parliamentary or councilor seat which becomes vacant between general elections.

By electeion is conducted when;

(a) A member of parliament or councillor resigns.

(b) A member of parliament or councillor dies.

(d) A member of parliament fails to discharge his/her duties.

(e) When there are irregularities in elections.