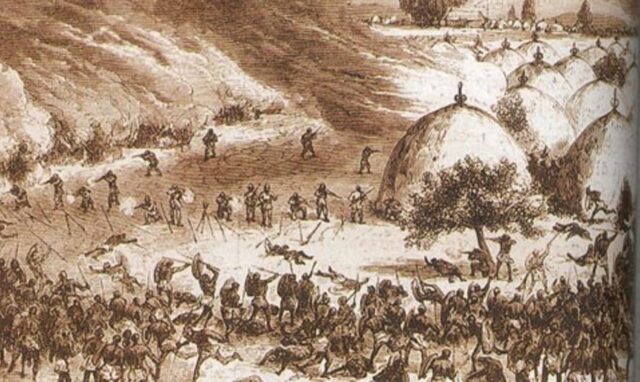 The Kingdom of Bunyoro-Kitara is the remainder of a once powerful empire of Kitara. At the hight of its glory, the empire included present day Masindi, Hoima, Kibaale, Kabarole and Kasese districts; also parts of present day Western Kenya, Northern Tanzania and Eastern Congo. That Bunyoro-Kitara is only a skeleton of what it used to be is an absolute truth to which History can testify.

One may ask how a mighty empire, like Kitara, became whittled away to the present underpopulated and underdeveloped kingdom of Bunyoro-Kitara. This is the result of many years of orchestrated, intentional and malicious marginalization, dating back to the early colonial days.

The people of Bunyoro, under the reign of the mighty king Cwa II Kabalega, resisted colonial domination. Kabalega, and his well trained army of “Abarusuura” (soldiers), put his own life on the line by mounting a fierce, bloody resistance against the powers of colonialization. On April 9th, 1899, Kabalega was captured by the invading colonial forces and was sent into exile on the Seychelles Islands.

With the capture of Kabalega, the Banyoro were left in a weakened military, social and economic state, from which they have never fully recovered. Colonial persecution of the Banyoro did not stop at Kabalega’s ignominious capture and exile. Acts of systematic genocide continued to be carried out against the Banyoro, by the colonialists and other foreign invaders.

Colonial efforts to reduce Bunyoro to a non entity were numerous, and continued over a long period of time. They included invasions where masses were massacred; depopulating large tracts of fertile land and setting them aside as game reserves; enforcing the growing of crops like tobacco and cotton at the expense of food crops; sanctioning looting and pilaging of villages by invading forces, importation killer diseases like syphilis that grew to epidemic proportions; and the list goes on.

TOPIC 4: THE RISE OF DICTATORSHIP IN GERMANY, ITALY AND JAPAN | HISTORY 2

Details of the horrific, genocidal acts against the Banyoro are well documented in “Breaking Chains of Poverty”, published by the Bunyoro Kitara Kingdom Advocacy Publications; authored by the Hon. Yolamu Ndoleriire Nsamba, Principal Private Secretary to H.M Solomon Gafabusa Iguru I, Omukama of Bunyoro-Kitara.

This book is a “must read” for anyone interested in the History and welfare of Bunyoro-Kitara. It enumerates Historical events, plus practices, past and present, that made Bunyoro-Kitara “a kingdom bonded in chains of poverty”.

Bunyoro resistance was a small scale resistance fought between the Banyoro and the British in 1893 under the leadership of kabalega.

Due to that Kabaka also joined the resistance with Bunyoro against British because he was also harshly punished by the British for involving into ivory trade without British commissioners consent.

Religious and  culture Interference. British interfered the Bunyoro and Buganda’s culture by forcing people to follow English cultures as a result people

British hash treatment. British government treated the Ugandans including leaders very hash by forcing them to accept British harsh rules, to pay taxes, to involve in production etc. as a result people

However, instead of strong resistance Kabaka was defeated then he joined with kaberega, Where both were defeated by British forces and sent them in exile in Sycelles in 1899. This marked the end of the resistance and British took control over Buganda.