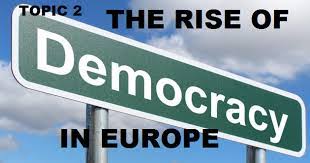 The English revolution refers to series of events in Britain that led to the collapse of feudalism and destroyed absolutism and serfdom in Great Britain.

There were series of conflicts in Britain; the commercial bourgeoisie were determined to destroy feudalism. The bourgeoisie wanted to make the crown an overall leader of England without the assistance of the landlords.

Another conflict was the control of the common land because the monarchy was against the enclosure system. Due to these conflicts, the democracy was abolished in 1649 but the king was restored as the head of the state.

The revolution was also characterized with the replacement of the Roman Catholic king, James II with the protestant one, William III.

There was also the passage of the bill of rights which included the following;

Any English monarchy must be a member of the Anglican Church.

The king has no powers to increase taxes without the general consent of the parliament.

The elections of the members of parliament should be free.

It declared that there should be frequent parliamentary elections.

Causes of the English revolution

The merchants were gaining a lot of influence, hence the king decided to impose heavy taxes on the merchants so as to control their growing influence. Taxes hindered business activities which forced the merchants to rise up and overthrow the government.

The king argued that he was an absolute and his power could not be questioned by man. The British people wanted this principle to be changed because they wanted a king who will be answerable to them.

Oliver Cromwell contributed to the outbreak of English revolution by uniting the people to remove the dictatorial monarchy. He was protesting against religious discrimination and all forms of dictatorships in England. Oliver Cromwell even suggested that King Charles has to be assassinated to pave a way for the establishment of a new government.

The emergence of classical economists played huge role in the outbreak of the English revolution. Economists such as Adam smith, David Ricardo and Thomas Malthus advocated private property and individual freedom in economic life of a society. Their views brought awareness among the people thus leading to the English evolution.

There were religious conflicts in 1531 where king Henry VII declared himself the king of Church of England, this action drew resistance from some of the church which led to the rise of a group known as puritans. The puritans were dissatisfied with the church and decided to separate themselves from the main stream, the king responded by persecuting them and calling them enemies. This led to the outbreak of the English revolution.

The emergency of a bourgeoisie class contributed to the outbreak of the English revolution. This class was determined to conduct business activities in England thus any class of people that tried to hinder their goals was overthrown. The monarchy had failed to introduce liberal economic policies that would support capitalism thus the commercial bourgeoisie joined with the peasants to stage the revolution.

The maintenance of discriminative classes contributed to the outbreak of the English revolution. The nobility and the clergy were the most privileged class. The middle class consisted of professionals and government officials and the last class consisted of the peasants who were very poor. It was the peasants who united with the commercial bourgeoisie to stage a revolution.

The new government pursued the laissez faire policy whereby it did not intervene in economic activities. The government allowed the domestic economy to operate fairly with few controls. The absence of government interference encouraged the investors to increase production thus leading to the industrial revolution.

Seizure of political power by the merchants.

There was seizure of political power by the merchants; this was a fundamental change in Britain because before the revolution all political powers rested in the hands of the king. The merchants played a great role in abolishing feudalism and introduced capitalism.

There was confiscation of church land and the church was separated from the state, this created room for the introduction of liberal capitalist ideas which supported the rise of capitalism.

IMPACTS OF THE ENGLISH REVOLUTION

2. Politically the revolution led to the overthrown of the absolute monarchy and the capitalist formed the republic government based on parliamentary supremacy controlled by the capitalists.

3. The Capitalist who formed parliamentary government possessed both economic and political power in Britain, this causes changes in English economy for example it led to abolition of internal taxes, barriers which led to promote trading activities in England, freedom of farming and individual enterprises.

4. The Royal army and soldiers started to be under the control of the government established by the capitalists.

5. The Government funds started to be controlled and approved by the parliament; this means that the parliament had power to budget the government expenditure as it was during monarchy system of the king.

6. All the feudalism elements that remained were removed (dismantled) that is, feudalism as a mode of production collapsed completely after the English political revolution.

7. The Revolution accumulated wealth, through the illegal ways of accumulating wealth (capital) Primitive accumulation of capital such as; plundering, looting etc and free competition in production was adopted which led merchants to start competing each other in production, this was because of merchants who come into power and who was under the development of capitalism.

8. The revolution caused death; many people were badly wounded and there was massive destruction of people’s properties like farms, shops, and workshops.

Contribution of English Revolution to the Rise of Democracy in Britain

1. It brought multiparty political system, basically in Greet Britain where Conservative party and Liberal party were enacted. This give chance to individuals to select the leader of their wishes, hence rise of democracy.

3. It brought much freedom of worship as they were able to worship the way they wish in any sect.

5. The revolution brought realistic constitution. It led to the country governed by the rule of law, all matters of the state follow the principle and law of the country.

6. Freedom of debate and expression. The England political revolutions played a great role for the rise of democracy in the world. The parliament was given high states of debating bill, to amend laws etc.

7. The revolutions spreed ideas of democracy to other countries such as France.