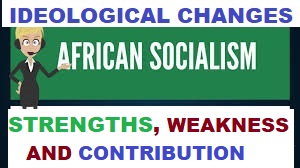 CHANGES IN IDEOLOGIES OF INDEPENDENT STATES

An ideology refer to a body of beliefs or principles which guide political, economic / or social system of an individual or group. The following are the political ideologies that were adopted by some of the independent African states:

SOCIALISM AND SELF – RELIANCE IN TANZANIA

It was an ideology which was officially introduced in Tanzania when the National Executive Committee of T.A.N.U made the Arusha Declaration in February 1967. As its name suggests Tanzania was introducing its own kind of socialism to destroy capitalist elements after independence.

The Arusha Declaration( Swahili Azimio la Arusha) and TANU’s Policy on socialism and Self-Reliance ( 1967) referred to as Arusha Declaration, is Tanzania’s most prominent political statement of African Socialism,’Ujamaa’or brotherhood.

TANU “CREED”: OUTLINES THE PRINCIPLES OF SOCIALISM AND THE ROLE OF GOVERNMENT

That all human beings are equal;

That every individual has a right to dignity and respect;

That every citizen is an integral part of the Nation and has a right to take an equal part in the Government;

That every citizen has a right to freedom of expression, of movement, of religious belief of association within the context of the law;

That every individual has right to receive from society protection of his life and of property according to the law;

That every citizen has a right to receive a just return for his labour.

That all citizens together possess all natural resources of the country in trust for their descendants.

That in order to ensure economic justice the State must have effective control over the principal means of production; and

THE AIMS AND OBJECTS OF THE ARUSHA DECLARATION ARE:

To consolidate and maintain the independence of this country and the freedom of its people.

To safeguard the inherent dignity of the individual in accordance with the Universal declaration of human rights.

To ensure that this country shall be governed by a democratic socialist government of the people.

To cooperate with all the political parties in Africa engaged in the liberation of all Africa.

To see the government mobilizes the resources of this country towards the elimination of poverty, ignorance and disease.

To see that the government actively assists in the formation and maintenance of cooperative organizations;

To see that wherever possible the government itself directly participates in the economic development of this country.

To see that the government eradicates all types of exploitation, intimidation, discrimination, bribery and corruption.

To see the government gives equal opportunity to all men and women irrespective if race, religion or status.

To see that the government exercises effective control over the principal means of production and pursues policies which facilitate the way to collective ownership of the resources of this country?

To see that the government co –operates with other states in Africa in bringing about African Unity;

To see that the government works tirelessly towards word peace and security through the United Nations organizations.

STRENGTHS OF SOCIALISM AND SELF – RELIANCE

Dismantlement of social classes. The government attempted to build the country in which there were no classes of people.

Restoration of social and political balance. Exploitation of people by a few individuals was abolished in favour of fair terms of work for all people. Thus, companies and business were monitored and regulated to deliver fairly for all.

WEAKNESSES OF SOCIALISM AND SELF RELIANCE

It could not fully eliminate social classes because bureaucrats had more class privileges that peasant and other workers. Bureaucrats had quality social and economic opportunities like housing, electricity and incomes

Socialism and self reliance in Tanzania was imposed from above by the government and it lacked an organic campaign that would educate and involve the people more closely.

It lacked an organic implementation strategy; the policy was imposed on the people and it had to be adopted quickly without any preparation

CONTRIBUTION OF SOCIALISM AND SELF – RELIANCE

It abolished conflicts or classes.

It laid down a strong foundation for national unity and brotherhood which date is keeping the people of Tanzania unified.

It inspired the spirit of hard work and patriotism.

The peasants and workers were enabled to own the means of production through their own cooperatives owned and under government supervision.

African socialism in Kenya was a political ideology adopted by the independent government of Kenya which promoted political democracy and social responsibility.

STRNGHTHS OF AFRICAN SOCIALISM IN KENYA

Nationalization of important service for the benefit of Kenyans was effected.

Use of national income for provision of popular needs in the country. For example utilization of government revenues for construction of public schools and hospitals was common practice in Africa socialism of Kenya.

It encouraged the formation of cooperatives in which the Kenyans cooperated in various economic and social activities.

WEAKNESSES OF AFRICAN SOCIALISM IN KENYA

African socialism in Kenya encouraged classes when it allowed the existence of unchecked private sectors. As a result few Kenyans emerged as owners of key resources like land, industries and trading companies.

African socialism was a compromise ideology since it had both capitalistic and socialistic features. For example, not many means of production were nationalized and many of the foreign companies continued to make super profit in Kenya.

THE CONTRIBUTION OF AFRICAN SOCIALSIM IN KENYA

It gave Africans an opportunity to own companies and industries

It improved the availability of social and economic opportunities such as jobs, participation in trade and education.

It reduced the gap between the rich and the poor thereby reducing social classes.

THE COMMON MAN’S CHARTER IN UGANDA

The Common Mans Charter in Uganda was the first major document that attempted to give definition to the left. It stated that,” The heart of the move to the left can be simply stated. It is that political and economic power must be vested in the majority”.

STRENGTHS OF THE COMMON MAN’S CHARTER IN UGANDA

The charter committed to the elimination of the gap between the educated and uneducated people.

The charter through document No. 2 created the National service. This new institution was to rain the youth in agriculture, animal husbandry and other cultural activities found in most parts of Uganda. The aim was to increase production, national awareness and promotion of the African culture.

The charter stipulated the need to create a Co-operative Bank to provide credits to the peasants who were members of co-operative unions. The peasants could get loans to advance their agricultural activities.

The charter appealed to workers to contribute their income to social security funds. Their financial contribution could help workers and the nation at large to accumulate money for investments in economic development and provide gratuity as well as pension when they retire.

The charter wanted to create common living standards and income among the people of Uganda. It insisted on creating one public service which received uniform salaries. Loans for cars and allowances were to be terminated.

The charter nationalized private enterprises though in some paragraphs it invited foreign private investors to invest in the country and guaranteed that such investments would be protected by law.

The ideology intended to make Uganda a more democratic and united nation. The electoral system was modified

WEAKNESSES OF THE COMMON MAN’S CHARTER IN UGANDA

It was a compromising nationalization. For instance, the government reduced its shares from shell and total companies in favour of private ownership.

It increased awareness on the importance of establishment of cooperatives and national service for the growth of the national economy.

It contributed to the creation of unity among the Ugandans who had been plagued by disunity and ethnic conflicts just after independence.

Humanism was an ideology which defined man to be the center of all government activities. It stressed on the values such as co-operation and mutual help as the people lived in the new independent nation

It inculcated the spirit of hard work and self reliance. Humanism taught the Zambians about the value of hard work

Elimination of exploitation of man by man.

It increased fairness in the allocation of social services to Zambians such as education, water, healthcare etc

Humanism improved unity among the Zambians.

The extended family was recognized and protected

It encouraged obedience and loyalty to the government and leaders.

It advocated for commitment of the government in serving the people; the principle of “man as the center of all government work” ensured that the government and its workers realize that all their work should revolve around giving service to the people regardless of race, religion or material wealth. It emphasized that every person deserved respect and dignity.

Humanism did not achieve self reliance; self – reliance in Zambia was not realized after independence. Zambia, like most other African nations, continued to depend on western nations for aid in form of grants and loans.

Classes between Zambians grew further during the implementation of humanism. The distribution of wealth was not equally done after independence. The minority, especially those in high government position accumulated wealth while the majority remained poor.

CONTRIBUTION OF HUMANISM IN ZAMBIA

It contributed to the growth of African culture in Zambia. For instance, it inculcated the sense of cooperation and mutual support inside the extended families.

It contributed to improvement in the provision of opportunities to all Zambians regardless of their races, religion and ethnic backgrounds.