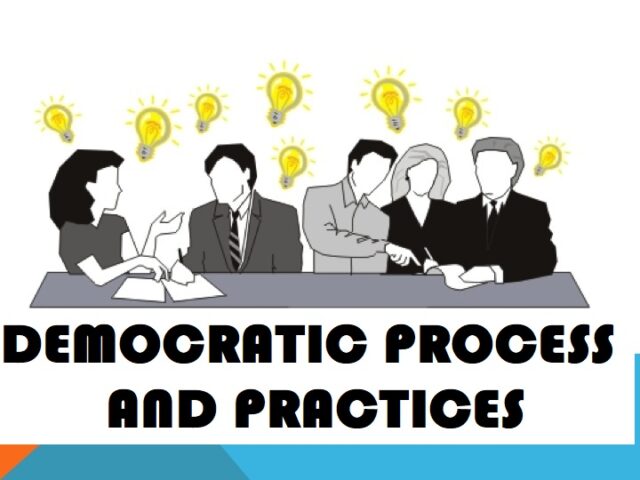 The meaning of the concept

The term “democracy” even in a purely descriptive sense, means different things to different people. Much has been debated on what is democracy and democratic value. Since Aristotle formulated the phenomenon called “democracy”, many philosophers have meditated and written about it with the result that much misunderstanding of its meaning had developed over the year.

This confusion forced George Bernard Shaw, as far back as 1948, to propose that “in order to eradicate misunderstanding and confusion about the meaning of democracy, the leading scholar and thinkers of the world be convened and the issue be settled once and for all”. Up to this material time, however, such a postulation has not yet been realized.

Democracy is generally taken to mean “a system of government and leadership in which the authority or power belongs to the people”.

Democracy originated from an ancient Greece whereby people exercised power directly to the government. They were making decision and opinions while directly participating in the government.

Democracy thus can be defined as the power of the people or power in the hands of people.

One weakness of the ancient Greek democracy was that slaves and women were not allowed to participate in discussion only free born citizens took advantage of the system.

The city state population was small such that the citizen could know one another and assembles to make binding decision on the conduct of their lives.

The act of assembling to make decision through popular vote was an act of democracy. This kind of democracy is possible only within small social entities such as small towns, villages, families, etc. at the nation level it is a dream because it is impossible to assemble the entire nation to make unanimous public decisions.

Abraham Lincoln defined democracy as government of the people, for the people and by the people.

“Government of people” means that the people are sovereign and that the government derives all its power and authority from the hands of the people.

“Government by the people” Means that the system of government, leadership and supreme power belongs to the people.

From these concepts one can say that in a democratic state people give their consent to their representative who rule people on their behalf.

There are two major types of democracy

It is a type of democracy which involves direct participation of all adult citizen in making public decision. This is only possible when the population is small. The city state of Athens was the first historical social democratic entity to practice direct democracy. It only had population of 5000 – 6000 citizens.

The term ‘democracy’ was originally formulated by the Greek philosopher, Aristotle (384-322 BC) within the context of local government, while he was researching the political process in 158 Greek city in public meeting on matters concerning the government and administration of their cities to discuss matter of general interest, to present proposal on such matter and to participate in the decision making. Hence, this is what later came to be understood as direct or participatory democracy.

It allows the highest level of participation

It works best in the community where citizen, have a common view of their interest and goals. For example, clan, tribes, village association.

It is possible in society with homogeneity among the members E.G. common ancestry, etc.

It can work with the knowledgeable/ well informed people who can make the right correct choices and decisions.

It provides quick and immediate answer to people. Also satisfaction is immediate to questions asked directly. This is because they are answered directly.

Direct democracy helps representatives such as members of parliament to gather information from their constituencies so that they can send them before the national assembly.

It has been advantageous on making and discussing by-laws in villages or hamlets and wards.

It cannot be applied in areas where the population is very high. This is because people cannot assemble together in a small area and discuss comfortably.

It is not easy to reach the consensus on the matter discussed. This is because every person will be trying to argue according to his/her interests

There is the possibility of the outbreak of conflict and misunderstanding. This is because every person will demand his/her opinions to be considered.

It is wastage of time to most people because the meeting will make people leave their production activities untended.

There are some people who are not able to express themselves before the masses, due to this situation there is a possibility of missing valuable ideas.

It is a type of democracy whereby citizens elect representative who will work on their behalf. For example, members of parliament, local councilors, president, etc/.

Presence of constitution: Indirect democracy has a constitution as a body of principle laws through which the state is governed.

Separation of power: The authority and power of the state is divided into three branches of government, namely the executive, judiciary and legislature.

The rule of law: The country is governed by the laws and that nobody is above the law. The law must ensure public peace and order through settling disputed peaceably.

Multipartism: Many political parties play an important a role in the government.

Basically, all adults have the right to vote or be voted for in elections

Voter apathy: This is not especially among the disadvantaged people who don’t participate nor have the influence in the elections.

Passive citizens: There are people in different sciatic who are not well informed on civics issues and responsibilities.

Dependency: This means to follow a group or leader uncritically and reducing the value of outsiders and avoiding disagreement. This behavior present democracy because it does not acknowledge equality.

Lack of economic democracy; Since only the minority have the great percentage of wealth, no political equality.

Democracy is not yet extended to many other civic institution. For example, the church.

There are three categories of democracy under which representative democracy is practiced.

iii. Constitutional monarchy: Is the government system elected by the people through a general election and is headed by the prime minister. The king/queen is the head of state who come to power through inheritance but who is simply a symbol of unity and has no read power. It is generally held that the king reigns but does not govern. Examples are in UK, Sweden, Japan, Denmark

In nay democracy regime there are ideas that most people believe are necessary for democracy to succeed.

The following are some of those principles:

Equality: This refers to equal rights and opportunities to the people. No racial, religious, ethnic or sex discrimination

Citizen participation: Every citizen participates fully in making decision in the country. For example, standing for elections, voting, being informed, protest, debating issue, etc. this system of participation checks the government from abuse of power.

Accountability: Government officials and leaders must be accountable to the people. That is they should word for the interest of the people.

Transparency in the government: People must be aware of what is happening in the country meetings, mass media press, etc also criticisms must be taken into account.

Multipartism: More than one part must participate in election and play its role in the government to provide it with different viewpoints and issues.

Human rights: These are values that reflect the respect for human life and dignity. Citizen have freedom of opinion, worship, speech, writing, meeting and associating with fellow citizens provided that they uphold the constitution and abide by the laws of the land.

Control of abuse of power: In democratic government officials are prevented from abusing their powers, the most of which is corruption. Various method are used whose common aim is to limit the power of the branches of the judiciary and the executive (agencies with power to act against any illegal action by any government official/ branch.)

The rule of law: This means that in a democratic government, no one is above the law and everyone should obey the law- i.e. the governors and the governed

Economic freedom: the government allows private individuals or in association and agencies to own property. Thus people are free to choose and join different trade unions.

Sovereignty: It is the freedom of the government to decide and execute doprogramstic foreign policies without interference from another country. Thus, a neo-colony cannot practice democracy, only a sovereign country can practice democracy.

Separation of powers: The authority and powers of the state should be divided into three branches of government that is the executive the legislature (parliament) and the judiciary (court) so that it becomes impossible for any one of these branches to monopolies state authority and power to the detriment of the democratic norms and processes.

Accountability and good governance: Democracy gives an obligation to government officials to refrain from misuse of power and so they become accountable to the people for their actions. This ensures good governance.

Equality and rights: In a democratic society all people are considered to be equally free although they may differ in intelligence, property, health etc. they have equal opportunities of participating in the decision of government and elections. This guarantees peace and harmony.

Promotion of good interests: Democracy gives room for the people to develop a cooperative habit of working together as well as tolerance of their differing views.

Self-government: People are more likely to accept laws, taxes and their obligation if they feel they have played some part in making decisions.

Democracy ensures the choosing of useful and good leaders. This is important because the leaders represent the voters.

Decision of the majority are likely to be right for their common good because they have been collectively discussed rather than those which have been made for them by a single person or by the minority.

Unfairness: The fact that a decision has been approved by the majority does not mean that it is always right. A mob can easily mislead itself even on issues of national interest

Need of literacy: Democracy does not work in illiterate societies because illiterate people don’t know the limits of those in power. They make very wrong choices and decisions under the quite of democracy.

Therefore, they will be incapable of dealing with technical issues and their contribution will be poor.

The role of government in the democratic process

Providing civic education to citizens. Citizens who are qualified should be encouraged to participate in election process and in policy making.

Inclusion of bill of right in the constitution. This ensures the right of personal liberty and equality before the law, freedom of movement, conscience and expression, protection of citizens against degrading treatment

Enhancing freedom of press. This aims at providing freedom of opinion. People should be able to express their view and find out what is happening in their communities and in other nation by using both state owned and privately owned mass media.

Ensuring a conductive environment to the civil society organizations and promote people’s participation through them.