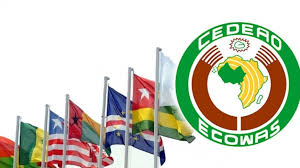 ECOWAS is an organization of western African states which once were ruled by France and Britain.  The ECOWAS came into being in 1975 after signing Lagos treaty on 28th May, 1975.

The formation of ECOWAS was the process which started before 1975 as follows:

By 1958 Ghana and Guinea formed a political union and later were joined by Mali, but by 1963 there was an agreement between Gambia and Senegal on currency matter, air service and trade.

Niger River Commission which constituted the countries near Niger River such as Mali, Upper Volta (Burkina Faso) and Niger. The commission was to coordinate and monitor how to use the Niger water.

The Lake Chad Basin Commission which constituted the countries such as Nigeria, Niger, Chad and Cameroon. With the above cooperation by 1975 it was inevitable to form the corporation which would unite the all West African states

The following are objectives of ECOWAS as follows:

To set up a customs Union over fifteen years by progressive reduction of import duties, so that the whole of West Africa would then become a free trade area.

Free movement of people, services and capital in the region.

To coordinate industrial and agricultural development in the region.

To create peace and harmony among the member states. They realized that by maintaining peace and order could enhance socio-economic development in the region.

The structure/ Organs of ECOWAS

Authority of Heads of states and Government. This is the supreme organ; the member of this organ meets once annually although extra ordinary sessions may be held if the need arises.

Council of Ministers. It is composed of one minister from each member state. The council is responsible for the general management of an organization.

The Tribunal. It is charged with responsibilities of interpreting the treaty. Also interprets laws and treaty for the organization. But, also concerns with settling disputes between the member states.

It is based in Lagos and is headed by an executive Secretary who serves a four – year tem office.  Mainly charged with the day to day implementation of policies.

Additionally, there are four specialized commissions dealing with the following matters:-

It is these organs which, work independently but with an integrated mission for the benefit of the organization

It composed Member of Parliament elected from the member country’s parliament.

The ECOWAS financial institutions .It composed with banks like Bank of Investment and Development (EBID), ECOWAS Development Bank

Achievements of the ECOWAS

It has achieved to eliminate customs and tariffs to the member states. This was passed by 1979 by the fourth heads of states summit at Dakar.  Thus, the member’s raw materials were exempted from any custom duty and tariff within the region.

Free movement of people, capital and services across the boundaries of many state within the regional had became possible

Various projects have developed and implemented by the ECOWAS for example a ten years reforestation project to check the southward spread of the Sahara desert in the Sahel region and dams construction projects.

The community has induced interstate relationship among the member states including students exchange between member states and an award for scholarships.

They have achieved to form Economic Community Monitoring Group known as (ECOMOG) which has had participated in peace keeping operation among the member states especially in Sierra Leone, Liberia and Nigeria.

Achieved success in the field of mutual defense and has actively participated in resolving conflict in the region. For example, it intervened in the civil wars in Sierra – Leone and Liberia.

Besides of its achievements the community is still inflicted with various problems which are still in need of solutions to address it.

Since the formation of the community though some achievements have attained but it is still facing numerous problems as follows:

Political instability, some member states have had ruined with political instability for example the countries such as Ghana, Nigeria, and sierra Leone has been affected with a number of coup d’état beside civil wars in Nigeria, Ivory Coast and Liberia has affected the progress of the community.

Lack of commitment to the community, this is because many nation are still having reliance either to France or Britain which were the former colonies. Besides, they are still interestingly doing business or engage in international trade with European nations.

Diseases, many people in the community are infected with diseases such as HIV/AIDS but also Malaria which is widespread in sub-Saharan Africa. Diseases reduce the manpower and become very expensive in treating the victims.  This has consequently caused a great burden to the community.

Neo – colonialism, neo-colonialism also still hinder the implementation of ECOWAS progress. The Western nations (donors), World Bank and International Monetary Fund dictate the socio-economic and political decisions within the community.  Besides, aid and loan given to the ECOWAS members are given on certain conditions.

FAMILY LIFE
FAMILY LIFE What is family? Family is social group of people who ...