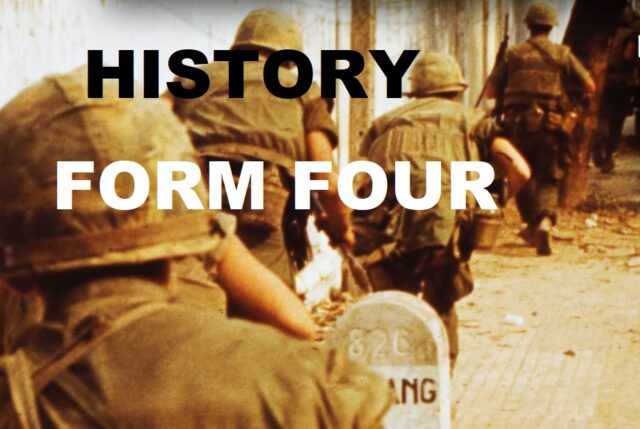 (i) Earlier Nationalism in Africa took root in?

(ii) The following are internal factors that led to rise of Nationalism, except?

(iii) The leader of young Kikuyu association was?

(iv) The aim of Kikuyu Central Association was?

(v) The first Association in Tanganyika to be formed was?

(vi)  Independence Churches were formed because?

(ix) Nationalist ideas in Uganda delayed because of the following except.

(x) The part which worn independence in Mozambique was

(b) What factors led to rise of welfare and tribal association in Africa.

4. (a) Describe the meaning of the following

(b) Explain how Second World War led to rise of Nationalism

5. Explain the causes of Zanzibar Revolution in 1964

6. Explain the contribution of tribal and welfare associations to the rise of Nationalism in Africa.

8. What factors led to emergence of Second World War?

9. Why was Non – Allied Movement formed?

TOPIC : 3  CHANGES IN POLITICAL AND ECONOMIC

CHANGES IN POLITICAL AND ECONOMIC POLICIES

(i) The dominant form of governance in African countries is?

(ii) Post Independence military coups were caused by the following except?

(iii) The prominent proponents of single part system were?

(iv) One weakness of post Independence economic political in Tanzania is?

(v) Kwame Nkrumah was overthrown in the year of?

(vi)  Which was not a weakness of economic policies in Kenya after independence?

(vii) Which country had the largest expansion of education after independence?

(ix) The following are hindrance to economic development except.

4. With specific examples describe the impact of structural adjustment programs.

5. Identify and explain the political problems that African countries faced at the time of independence.

6. Asses the strength and weakness of social services provided by African government after independence.

7. Identify solutions that can be used to solve current problems that hinder development in Africa countries.

8. What steps has African governments taken to solve political problems inherited from colonialists?

9. Explain why there were many political coups in Africa after independence.

(i) The Organization of African unity was formed in year of?

(ii) The three governing bodies of OAU are:

(iii) The organization of African unity was Transformed of African Union in?

(iv) Dispute between members states in OAU are resolved by

(v) The head quarter of ECOWAS is based at

(vi) One of the following is not an achievement of ECOWAS.

(vii) In Comesa, technical support and advisory services to member states are provided by:

(viii) Tanzania withdraws from COMESA because?

(ix) Which is not a reason which lead to collapse of East Africa Community?

(x)  One of achievement of SADC is?

2. (a) Why was East Africa Community formed?

(b) State the achievement of East Africa Community

(b) What were achievements of OAU?

5. Examine the problems which are hindering effective functioning of SADC

6. Discuss the achievement of Economic Community of West Africa states

7. Discuss the contribution of world Bank to Africa

8. What were reasons for Emergency of NAM?

9. What are  importance of UN to African countries.