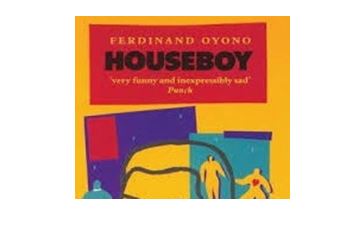 He is the main character, who is activity of circumstances of colonial rule in Cameroon

He reflect child labor and street children in modern society due to family poverty when he works as a house boy oppressed , humiliated, discrimination, exploitation tortured to death

He is a catholic father , who lives in missionary center

He is portrayed as oppression , exploiter that humiliates his house boy (toundi) who is an Africa

He portrayed as a racist despite being as a religious

He is the assistant to father Gilbert

He took the position of the father Gilbert after his death

He is a racist ,exploiter ,oppressor

He is the white chief of police force

He is harsh and brutal to Africans

She is an Africa girl

She steals the agricultural engineer’s money and moves to Spain

At the beginning, she treats Toundi friendly but later miss treat him as an enemy

Harsh and brutal to his son

He use abusive language

b) LANGUAGE USE/ TECHIQUE

E.g. father Gilbert hair is like the beard of a maize cob

E.g. the dog of the king /the commandant like the king

E.g. the author in the novel ,the author says toundi was treat like a pet animal by father Gilbert and kicked like a dog by the commandant

Sophie herself is called by agriculture engineers my cabbage my chicken

Madam refers the African food is an old baboon

Toundi parents are symbol of old generation lost to the colonists

Madame/commandant both symbolize the French colonists and colonialism in general

c) TITLE OF THE NOVEL

The title of the novel is just it just like other literature work, the title of ” house boy ” it standard for symbolism of African country where by other character like father Gilbert e.g. represent white domination, in order to exploit Africa nation

These are among of overriding theme in the book; they are mostly depicted through the main character for example;

The servant were given very bad food

The Africans who underwent an act of assimilation was not any use to them, at the first Africans had thought that the white had a very high level of civilazation and that is why some of them were assimilated example Toundi.

The French humiliated the black Africans, they claim the Africans to be the French after undergoing the policy of assimilation

They don’t pay Toundi as the house boy

They tortured toundi until he lost consciousness

Toundi is disappointed at last when he discovered that inspite of being assimilated he still despised by whites, he still humiliated, opposed ,exploited by the whites though toundi is honest and respect to them

Toundi became aware of the French hypocrisy at his bed during his death “he say brother what are we? We blacks who calls our selves French man?” This question shows that finally Toundi has come to discover that the assimilation done to them was full of hypocrisy aimed to facilitate oppression, exploitation, among the Africans

This is moral pollution in which there is a tendency of people violating the social norms and going against the moral value.This has seen/shown in the novel in different occasion’s value;

Father Vandemayar also acts immorally because he treat people against

Prostitution has also been revealed in the novel as, discovered that Kalisia used to be a prostitute at the coast

The French colonial administration include the police, the prisons and the police of assimilation and catholic mission (religions) and the white man’s culture are used to oppress, exploit, humiliate and segregate Africans in their own countries.

c) RELEVANCE OF THE NOVEL

The book is relevant to the society due to the following aspect;

People have failed to live by what they preach, including the church which is expected to be the savior of humanity ,in sometime leads by hypocrites e.g. father Gilbert