Home HISTORY How did Versailles Treaty and Great Depression cause the rise of Nazism... 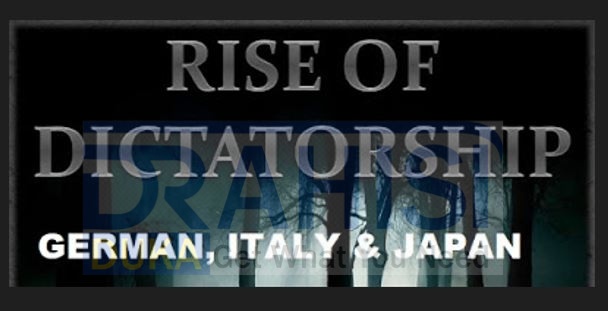 How did Versailles Treaty and Great Depression cause the rise of Nazism in Germany?

Qn. The Treaty of Versailles is blamed to have caused the rise of Nazism in Germany. How?

In 1919 at the close of the War, the great world powers convened in France to discuss the future of post-war Europe. The product of their meeting was the Treaty of Versailles which was signed on 28 June 1919, between Germany and the victors.

In the Treaty of Versailles, the victorious powers (the United States, Great Britain, France, and other allied states) imposed harsh punitive territorial, military, and economic provisions on defeated Germany. The unfair Versailles Peace Treaty is and will always be blamed for fostering the subsequent emergence of totalitarian regimes in Germany and Europe.

<> Firstly, Germany was not consulted. The representatives of Germany and the other defeated Central Powers were not allowed to sit at the conference table until the terms of the Treaty had been agreed upon.

This lack of consultation angered Germans, but had no choice, as the Allies declared that war would resume if the German government did not sign the treaty they had agreed to among themselves.

<> Secondly, the treaty caused economic problems to Germany. Germany’s economy in the 1920’s suffered greatly partly because of the Treaty of Versailles. Germany owed an abundant amount of money to the Allies.

She had to pay an amount of 6,500,000,000 pounds for the damage which she had caused in the war as a reparation. This caused caused a state of hyperinflation and economic distress within Germany. The failing economy created a crutch for the rising Nazi Party.

<> Thirdly, the treaty ended with German territorial loss. In the treaty, Germany lost about 10 percent of her land. The industrial Saar region was placed under the administration of the League of Nations for 15 years, Alsace-Lorraine was given back to France while Denmark received Northern Schleswig.

All of territories which were for long Germanized, were now given back. Furthermore, in 1923, France occupied the Ruhr Valley, the heartland of German industry, because Germany was unable to pay war reparations demanded by the Treaty of Versailles. This had seriously weakened Germany

The Great Depression was a serious economic slump that began in the united states and hit the global economy. Although Germany was economically devastated after a draining defeat in World War I, a slight economic recovery took place in Germany 1923-1919 during the reign of Gustavo Stresseman, especially as a result of American loans.

However, things changed in 1930s after the Great Depression. The Americans not only stoped their assistance to Germans, but also insisted on calling back the American loans from Europe. Germany was once again in serious financial crisis.

The great depression had caused many problems to Germans:

<> Firstly, German business collapses. As USA withdrew and called back her loans, German businesses were forced to close. Perhaps the crippled economy of Germany could not sustain without American money
<> Secondly, the rising number of unemployment. In Germany, unemployment rose sharply beginning in late 1929, and by early 1932 it had reached 6 million workers
<> Thirdly, the depression brought about hardship and sufferings. The majority Germans were in a severe bad economic situation. Increase of unemployment, failure of business and hyperinflation intensified the hardship of the lives of majority
<> Fourthly, the depression intensified communists threats. Many workers and common people whose lives became desperate, turned to communism. This frightened wealthy businessmen, so they financed Hitler’s campaigns
<> Also, the depression exposed the weaknesses of Weimar government. During the whole period of depression, the government was in chaos. President Hindenburg dismissed Chancellor Heinrich Burning in 1932.

His replacement, Franz von Papen lasted six months, and the next chancellor – Kurt von Schleicher only lasted two months. People had lost confidence on government, while NAZI was becoming overwhelming. Thus the only alternative for President Paul Hindenburg was to collaborate with NAZI, thus appointed Hitler.

Therefore, The Great Depression of 1929 struck America hard but Germany much harder. The Weimar government failed to muster an effective response to the Depression. This forced the Germans who were in seek for a fast and accurate solution to join Hitler, who promised, once in the power, to restore the ruined economy of Germany.

Why African Resistance against the imposition of colonialism Failed?