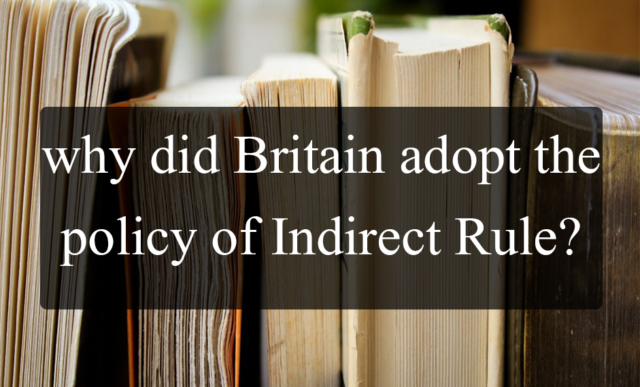 This is a colonial system of administration, whereby, African traditional rules were involved in administering their fellow Africans at the local level while the colonial officials and administrators administered at the higher level. OR

The indirect rule system was introduced into to Nigeria by Lord Fredrick Lugard who was known to be the father of indirect rule in Nigeria in 1990. The British officials in Nigeria formulated and enforced policies and laws through the traditional rulers who only served as intermediaries between the people and the British government.

However, the cultures and traditions of the people were respected and retained by the British authorities in order to make them more acceptable and welcomed by the people. This system worked out well due to the cooperation of the traditional chiefs who claimed that since their cultures and traditions were not tampered with, they have no problem dealing with the British officials, but this was to some extent.

The motive for the application of indirect rule

The major reasons that made Europeans to initiate and apply the indirect rule system of administration in Africa were:

1.The Europeans did not want to interfere with the African traditional systems of administration.

2.The Europeans administrators wanted their instructions or orders to appear as if they were emanating directly from the African traditional rulers. This was aimed at reducing African resistances against the European policies.

3.The Europeans wanted the African chiefs to appear as the ones giving orders to their subordinates (fellow Africans).

4. The Europeans introduced the indirect rule system with an assumption of civilizing the Africans.

5. In other areas, indirect rule was used when the system of direct rule had proved failure. For example, the British colonial government decided to use indirect rule in Tanganyika to avoid what happened to the Germans.

Reasons for the British to use indirect rule in their colonies

The British colonial government used indirect rule in most of her colonies in Africa because of the following reasons.

1. Britain drew more attention to her colony in India, thus it was difficult for her to introduce direct rule in Africa.

2. Britain did not have enough manpower to administer her colonies in Africa. For instance, in 1900 it was reported that the British had only 42 British officials in her Nigerian colony. This number was not sufficient to administer the whole colony. The shortage of personnel was caused by lack of experienced workers. Moreover, British citizens were not willing to work in Tropical Africa for fear of Tropical diseases and other physical problems such as transportation.

4. The indirect rule proved to be effective and efficient in their Indian colony; therefore, the British government was inspired to apply it in Africa.

5. The British thought of using the indirect rule in order to overcome resistances from Africans. Consequently, Africans rulers were made to feel that their status was honored by British, as this system of administration gave them an opportunity of keeping some of the money corrected in form of taxes for their native treasuries. That money was spent for paying messengers and policemen salaries. However, the local African chiefs retained the money for their personal use.

6. Physical barriers such as poor infrastructure, presence of mountains, thick forests and dangerous animals in the colonial African forces the British to use indirect rule.

7. A language barrier between the British and the Africans forced the British to use indirect rule. Neither Africans nor Europeans understood the language of the other. Hence, they used interpreters.

Strength and weaknesses of indirect rule

The following were some of the strengths rule:

1. It avoided African resistance by appointing traditional rulers to rule on their behalf. Hence, all complaints were directed to traditional African rulers.

2.It was cheap, as local chiefs were used to mobilize their people to pay taxes and work as forced laborers.

2. Favourable political Atmosphere:The political atmosphere in Northern Nigeria at that period was favourable for the introduction of the system. The method of traditional administration at that time was very difficult for Britain to displace the Emirs from their position so aburuptly.

4. It reduced language difficulties: The system of indirect rule was adopted in Nigeria by Lord Lugard in order to reduce the problems posed by language. Lugard was aware that the people of Nigeria at that time did not speak nor understand English Language, and therefore going through traditional rulers to govern the people would reduce the language problems.

5. Vast Areas Involved: The large areas of Nigeria especially the Northern Nigeria where the system was first introduced contributed to the adoption of the system of indirect rule.

6. Its Beneficial Effects: Lugard introduced the system with the hope that it will be beneficial to both Europeans and Africans. For instance, by using traditional rulers, Lugard viewed it as a way of providing employment for them.

7. Its Cheapness: The system of indirect rule was adopted in Nigeria because, economically, it was not expensive. To employ and pay its personnal to run Nigeria as a whole could have been the highest stage of financial extravaganza on the part of Britain.

The following were some of the weaknesses of indirect rule:

2. It had created social differences among Africans. The chiefs’ families and loyal families got privilege of getting social services such as education, hospitals and many more while the rest of the community were not getting such facilities.

3.Tribalism developed as an impact of indirect rule. African chiefs who were entrusted to rule on behalf of colonialists considered themselves superior to other in their land. For example, Kabaka Mwanga of Buganda created disunity among Ugandan when he declared the Buganda kingdom independent in 1960.

4. African chiefs became puppets of the administrators and did not serve their people.

5. The indirect rule cemented centralized bureaucracy through the use of the district commissioners.

6. The system of indirect rule alienated the educated elites in preference to the illiterate ones.

7. Traditional rulers were made to be autocratic as a result of power vested in them by the Indirect rule system.

8. The system brought about division between the traditional rulers who looked upon as British puppets and the alienated educated elites thereby, strengthening the policy of divide rule.

9. The system denied the people the power of appointment and deposition of cheifs which was given to the British governor.

10. The system contributed in the concentration of power in the hands of few traditional rulers thereby, marginalising majority of the people.

11. The system contributed in the delay constitutional development mainly because, the puppet cheifs did not want any change that may deny them of the enormous powers they were enjoying.

13. The concentration of too much powers in the traditional rulers led to serious abuse of power.

14. Traditional rulers under the system of indirect rule became corrupt and enriched themselves at the expense of their subjects as there cases of embezzlement and mis management of tax money.

15.The system denied the people the democratic system of checks and balance that were existing before the advent of the British.

16. Traditional rulers were deprived of their personal initiatives and the power to defend the interest of their people against British colonial rulers.

17. The system encouraged tribalism and sectionalism at the expense of national consciousness; no wonder one part of Nigeria did not want independence when other parts were clamouring for it.

18.The British indirect rule did not spell out how the system can metamorphose into a central government in Nigeria.

19. Another weakness of the system was its inability to state the limit of the functions of different local authorities which was one of the causes of many part of Nigeria, for example the Ana women riots of 1929.

20. Finally, the system had no universal application because it could not be applied to all environments, and that was why the system failed woefully in Eastern Nigeria.

The indirect rule in Tanganyika

After the First World War (WWI), all the German colonies including Tanganyika were redistributed among Europeans powers. Tanganyika became a mandated territory under the British rule. The British rule in Tanganyika used the intermediate traditional chiefs who ruled under ethnic groups.

The British administration system had several small units led by chiefs or headmen, who were just colonial paid servants. The African unit leaders (chiefs) had no power; they were subjected to removal from their positions if they could not fulfill the colonial duties.

Some of major duties of the African chiefs to the colonial administration were:

(a) To mobilize their fellow Africans to produce cash crops in their areas.

(b) To mobilize their fellow Africans to offer their labor force to mines and plantations of colonial governments.

(c) To mobilize people in their areas to participate in the constructions of roads, railways, bridges and collect all forms of taxes for the colonial government.

In order to exploit more African labor and natural resources, the British opted into using the local chiefs who ruled in the pre-colonial time due to the following reasons:

(i)  They could easily mobilize their people to participate in colonial economy activities.

(ii) In case of any grievances, the Africans could directly face their chiefs and not the British administrators, because they were the immediate people who were implementing the colonial policies.

(iii) Also, the British were instilling tribalism in order to divide Africans and finally rule them. This was fulfilled through creating local tribal chiefs at the grassroots.

The indirect rule in Kenya

The British ruled Kenya through the different rule system of administration. The indirect rule system used local chiefs in Kenya to govern their people on behalf of the colonial government. However, the British administrative system in Kenya was not uniform.

Where traditional chiefs existed, the British used them as their agents and rewarded them with piece of special alienated land and offered them tittles of paramount chiefs. Such practices were common among the Wanga, a branch of the Kuhya tribe.

Other fringe benefits which Africans tribes acquired were the British assurance of the military protection against their enemies. Children of these chiefs had the privilege of getting quality education their mission schools.

In areas where tradition African leaders were not available, the British appointed their own chiefs. This was the major way of administering their rule to the decentralized African communities in Kenya.

The major roles of African chiefs during the British colonial rule in Kenya were:

(a) To maintain peace, law and order in their areas.

(b) To collect all forms of taxes for the British colonial rule.

(c) To mobilize their people to offer labor to road and railway construction, cash crops production, mining and many more, whenever required by the colonial administration.

The effects of indirect rule in Africa

Some of the effects of indirect rule in Africa were:

1. Large portion of land from the Africans were confiscated by the white settlers. This situation made many African to be alienated from their ancestral land.

4. The white settlers were favored much in land distribution, employment, representation in legislative council and areas for settlements. They were also given loans for developing or opening settler farms.

The colonial administration was pyramidal; at the top was the governor, who was highest ranking personnel in charge of the political and administrative matters in the colony. The governor checked if the colonial polices were implemented and was responsible to his government in Britain.

The British colonial administrators were mostly middle-class citizens who had a moderate educational background. Some of them were geographers, political scientist, historians, sociologists and anthropologists.

The courts were conducted through traditional African laws, though the Europeans considered them to be barbaric. For example, the Hehe had sub chief known as Vanzagila. Under him were the Jumbes; under the Jumbe were the Lunanzi. These were the traditional village court processors who were solving cases at the grassroots level for the Hehe.