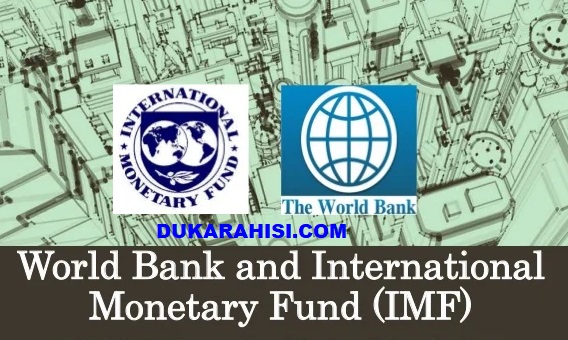 The IMF and WB are two most important institution set up by the UN monetary and financial conference popularly known as the BRETON WOOD conference held in New York in July 1944 however these two institutions come into effect/existence in 1945.

1. To promote international cooperation on international monetary affairs by being a machinery for consultation and collaboration about money.

2. To facilitate international trade by adjusting differences between the values of currencies of different countries of the world.

3. To facilitate exchange stability and ordering exchange arrangements including transfer of fund among nations.

4. To eliminate foreign exchange restrictions which prevent the growth of world trade.

5. To shorten duration and magnitude of payment of imbalances (debts) between nations.

1. To administer exchange rate policies and restrictions on payment for the current account transactions.

2. To provide members with funds in order to enable them collect or pay for their debts.

3. To provide forum or room for members to consult each other and work together on international monetary matter

1.The IMF provides loans to all needy members on condition that they must pay bank soon after solving their debts so that other needy members can be borrowed.

2. A recipient member should first show how she intends to solve debts and how she will pay bank the debt with interest which always takers 3 to 5 years.

This was established on July 18, 1944 and started her activities in 1945, hence WB was known as international bank for reconstruction and Development (IBRD) and its head quarter is in Washington DC U.S.A.

1. To work on reconstruction and development of its members in which most of the members were affected by the WWII.

3. To promote long term balanced international trade by enabling members to balance their payments with money from the bank.

PRINCIPLES OF THE WORLD BANK

2. Loans may be used to purchase goods from any country in the world without restrictions.

3. Loans can be given to either country or political sub-division or to private enterprise in a given territory.

See also  TOPIC 3: THE PEOPLE OF AFRICAN ORIGIN IN THE NEW WORLD | HISTORY 1

4. Technical assistance and other services are provided to member state.

5. Bank decision to provide money must be based only on economic consideration.

6.The loans must be guaranteed by the government concern and for specific project.

CONDITIONALS OF IMF AND WB

The IMF and WB introduced the following conditionality aimed at changing the economies of LDCs to be a capitalist economy.

1.To allow trade liberalization and foreign exchange; whereby the government of the LDCs is forced not to control the prices and abolish the price commission so that the prices should adjust themselves in the world market basing on the law of supply and demand.

2.To devalue the currencies so as to attract more investors in countries and more buyers of goods from countries concern, but also devalue of currency aimed to make the currency of the LDC s at least to match with the capitalist economy.

4.The government of LDCs should increase taxes by charging public goods and services highly.

5.The government of the LDCs must reduce their expenditures on provision of social services like in education, water supply, and electricity by introducing cost sharing between the government and people with general public concern with social services.

6. To allow and introduce western democracy or liberal democracy led to existence of multiparty and its features.

7. To allow redundancy of works. This is done by the IMF and WB to force the government of LDCs to privatize government parastatals and reduce workers from civil servants in order to control the budget of the country, reducing budget deficient and controlling over expenditures.

8.To allow privatization policy; hence the government of LDCs are forced to privatize their economy in the countries for the foreign investors such as agriculture, mining sectors all these is done by welcoming foreign investors to invest tin different economies sectors.

This refers to the policies introduced by IMF and WB in order to control the state budget and official policies in the LDCs; therefore the IMF and WB aimed at creating changes of the government budget so as to bring development in the LDCs.

Due to worsening economic conditions the LDCs especial in Africa in the mid of 1980’s; approached the IMF and WB for Loans hence the IMF and WB suggested for SAP’s to be introduced in the LDCs as a solutions for their economic development.

REASON FOR ADOPTION OF SAP’S IN LDCs

1. To solve external debts crisis in the LDCs especially in African States.

2. To promote rural development projects in order to improve the living standard of the rural people.

4. To improve the rapid decline of G.N.P (Gross National Profit) in order to make sure that nations found in the LDCs should improve their national domestic product and avoid dependency from the developed countries.

5.To improve the decline of health services in order to make sure that government of the LDCs particularly in Africa should improve better social services to their people like hospitals educational facilities, clean water supply etc. e.g. availability of drugs in hospitals, dispensary or health centers, availability of equipment in hospitals and educational facilities i.e. books laboratory equipment etc.

8. To help the LDCs to get out of the poverty this is common problem in LDCs.

1. Aimed to reform and elimination of restriction of trade between North –South.

2.Aimed to privatize all public sectors so as to improve the G.N.P. of the country concern, provide employment and improve the growth of per capital income of each individual found in LDCs.

4.Aimed to remove and reduce poverty by improving the living standard of the people found in LDCs, improving G.N.P. of countries, improving science and technology of the third world and improvement of economic growth.

5.Aimed at improving public investments programmed by welcoming investors both from within LDCs and outside of the LDCs.

6.Aimed of improvement and clear linkage of different sectors of the economy found in the LDCs for domestic development and restoration of economic growth of the LDC.

3.Devaluation of currencies. The LDCs is forced to devalue their currencies in order to accept by the capitalist in their trade transactions in the world market.

4.Privatization of economic sectors; are reforms programs in the LDCs are forced to privatize their financial sector, industry, mining trade and reforming other sectors like public sector management, trade sector etc.

5.Unemployment/redundancy of workers; majority of the civil servant face with the problem of unemployment after public sector privatized to the foreign investors

6. Elimination of trade barriers, tariffs and custom duties. The LDCs are forced by IMF and WB to eliminate trade barriers in order to premiere private sectors and foreign investors who come to invest in LDCs.

7. Elimination of price commissions in order the prices in the market to be determined by the law of supply and demand.

8. Removing restrictions on collective reform and wage selling practices so as to attain better life in LDCs, this is achieved by introducing collective bargaining between employers and employees.

10. Introduction of trade liberalization. This is done by forcing the governments of the LDC s to remove the price commission of raw materials and manufactured goods in market to be determined by the law of supply and demand.

11. Destruction of culture in the LDCs by forcing LDCs to practice their foreign culture which always destroy the culture of the people found in the