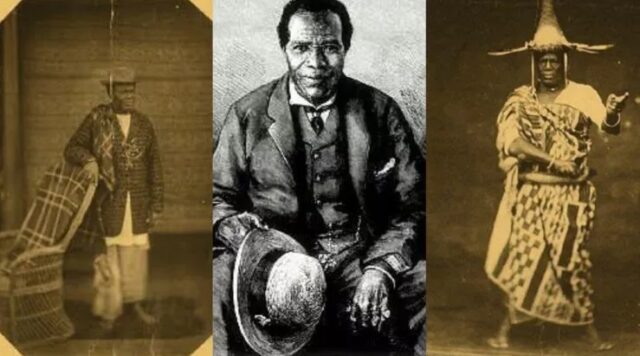 King Jaja of Opobo (full name: Jubo Jubogha; 1821–1891) was the first king (amanyanabo) of Opobo. He was the founder of Opobo city-state in present day Rivers State of Nigeria. Born in Umuduruoha Amaigbo in present-day Imo State, his actual birth date, as well as his birth parents, is unknown.

Jaja earned his way out of servant hood (apprenticeship) after serving his master for some years. At the death of his master, he took charge of the trades and went on to head the Anna Pepple House merchant faction of Bonny Island.

Under him, Anna Pepple absorbed other trade houses until a dispute with the Manilla Pepple House led by Oko Jumbo compelled Jaja to break away to form the Opobo city-state (26 miles east of Bonny) in 1869.

At the 1884 Berlin Conference the Europeans designated Opobo as British territory. When Jaja refused to cease taxing the British traders, Henry Hamilton Johnston, a British vice consul, invited Jaja for negotiations in 1887.

Jaja was arrested on arrival aboard a British vessel; he was tried in Accra in the Gold Coast (now Ghana) then exiled, first to London, and later to Saint Vincent and Barbados in the British West Indies.

In 1891, Jaja was granted permission to return to Opobo, but died en route. Following his exile and death, the power of the Opobo state rapidly declined.

British imposited and conquered the southern region of Nigeria, used various methods in order to ensure that they control the area since Nigeria was a very potential area for colonial demands also there were strong centralized states hence it was not easy for the British to control the area easily so the British used two methods;

Therefore in order for the British to succeed to control Nigeria [interland] they decided to make bogus treaties with local rulers in Niger delta in 1884 which led to the proclamation of the Oil River protectorate in June 1885.

King Jaja of Opobo kingdom was among of the rulers in West Africa in particular Nigeria who strongly opposed imposition or establishment of British colonial rule / control in his area.

King Jaja of Opobo was powerful economically and militarily because; king Jaja was a successful trader who benefited from palm oil trade.

After the coming of the British merchants opposed and interfered king Jaja’s monopoly [control] of the palm oil Rivers. Therefore king Jaja decided to react against the British imposition in his territory to safeguard his economical, political and social position and power.

REASONS CAUSES OF KING JAJA OF OPOBO RESISTQNCE IN NIGERIA

He wanted to protect his trade of palm oil because Britain

He opposed British monopolizing his

Due to the above British attempts, king Jaja fought against the British which led to the relationship between British to break hence the decline of trade. King Jaja’s military was defeated by the British forces and deported king Jaja to Seychelles while the Northern Nigeria resistance continued until first half of the 20th century when Royal Niger company forces annexation in 1899 and 1900 when British was taking over the colony [1900].