Tanzania Rural and Urban Roads Agency (TARURA) were officially inaugurated by Hon. Prime Minister Kassim Majaliwa Kassim on 2nd July 2017. The launching of TARURA   followed after announcement   in the National Gazette with GN 211 of 12nd May 2017.

The Prime Minister  directed the TARURA  to kick out rampant corruption that prevails in tender processes, especially for road projects. “Only capable contractors should be hired to execute road projects through competitive tendering,” remarked the Premier.

He also ordered TARURA to address poor supervision of the construction contracts between contractors and authorities in road projects, emphasizing on transparency in all contracts for public works.

Mr. Majaliwa warned some district council leaders whom he accused of re-channeling funds allocated for roadworks to other projects, reiterating that funds should be used as per the planned projects.

He said that TARURA would facilitate improvements of rural and urban road networks, enabling people to transport crops and other items from rural to urban areas.

“The new agency is key towards boosting agricultural productivity by facilitating transportation of crops to market. It will also be useful for our economic growth,” he observed, adding that TARURA will help to transform the livelihoods of people, reducing the risks and time they spend on roads.

Mr. Majaliwa said the new agency would facilitate provision of social services to people especially in rural areas. He also approved the allocation of funds from Roads Fund to Tanzania National Roads Agency TANROADS and TARURA at 70 and 30 per cent, respectively.

Earlier, the Minister of State in the President’s Office, Regional Administration and Local Government, Mr. George Simbachawene, pleaded with the Premier to review allocation of funds from the Roads Fund towards TANROADS and TARURA.

“TARURA is the key to social development and it will uplift the level of national economy,” he argued, noting that the road infrastructure helps to improve agricultural production as well as facilitating smooth delivery of social services to the citizens.

The Minister pointed out that the road network under Local Government Authorities covers 108,942.2 kilometers, which are over half of the entire country’s road network. 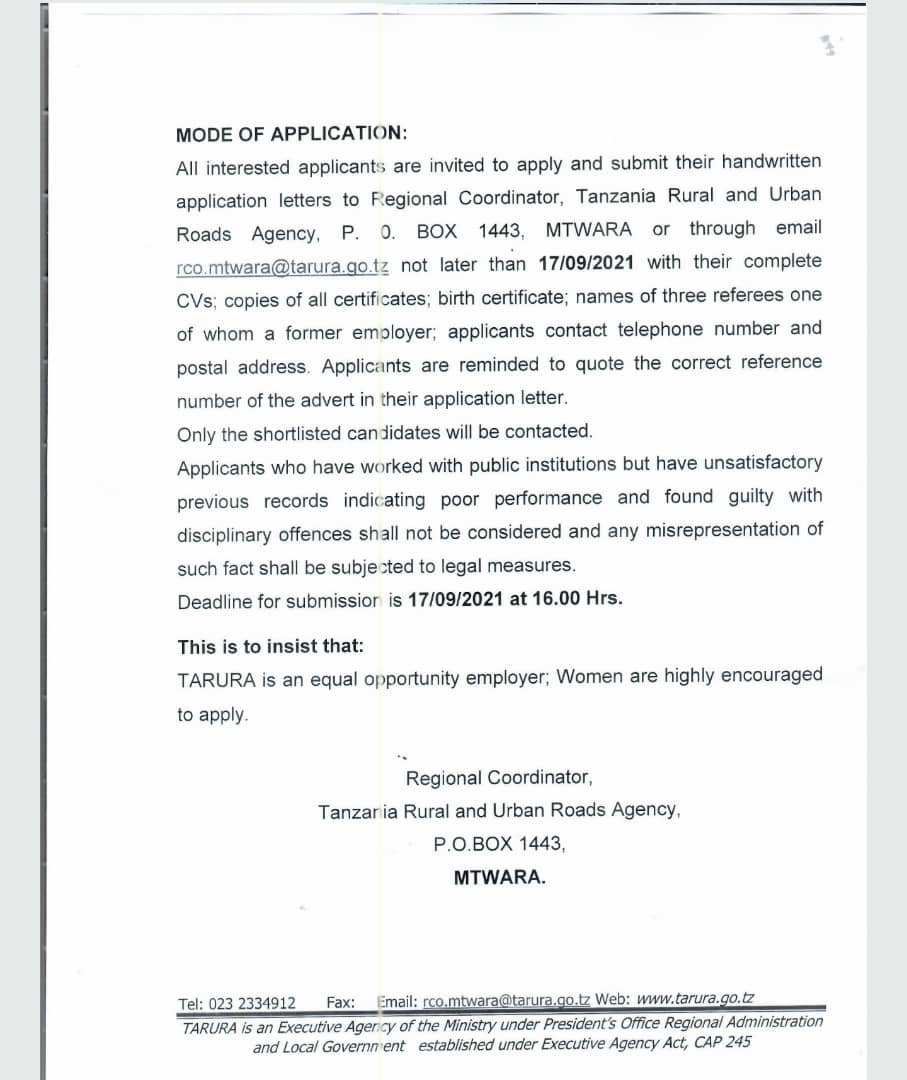 The main functions of TARURA shall be to:-

i) Develop and maintain rural and urban roads network;

ii) Carry out engineering traffic and economic studies for the maintenance and improvement of the road network;

ix) Negotiate agreement with private sector entities to facilitate financing and development of selected roads in accordance with guidelines prescribed by Minister; x) Adopt harmonized approach on technical standards for the promotion of the sustainable rural and urban roads network;

xi) Undertake research or collaborate with any research organization with a view to facilitate the Agency’s plan, development and maintenance activities;

xiii) Advise the Ministry responsible for Regional Administration and Local Government on matters relating to rural and urban roads.

Tanzania Rural and Urban Roads Agency (TARURA) is an Executive Agency of the President’s Office, Regional Administration and Local Government, (PO-RALG), established under Section 3 (1) of the Executive Agencies Act. (Cap. 245) by Order published in Government Notice No.211 dated May 12, 2017; and was inaugurated on July 02, 2017.