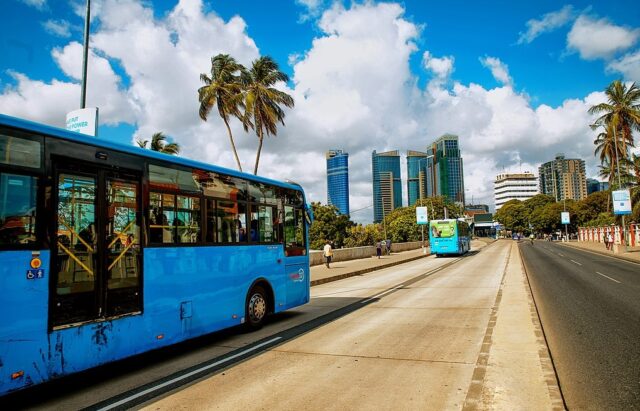 Construction of the first phase was completed in December 2015 at a total cost of €134 million funded by the African Development Bank, World Bank and the Government of Tanzania.

The first phase of the project has a total length of 21.1 kilometers with dedicated bus lanes on three trunk routes with a total of 29 stations.

The entire system is operated by The Usafiri salama Dar es Salaam Rapid Transit (UDA-RT) under the surveillance of the Surface and Marine Transport regulatory authority (Sumatra) Currently, the route is serviced by a fleet of 140 Chinese built Golden Dragon buses, providing express and local service for 18 hours daily from 05:00am to 11:00pm.

With the rapidly growing population of the city, the government began to draw plans for a rapid transit system in 2003. The government predicted the city population to grow over 5 million by 2015 and invited the Japan International Cooperation Agency to design a master plan for transport in the city in June 2008.

A bus rapid transit and a metro transit system were proposed but the metro system was not approved due to the high construction and operational cost involved.

The project was placed under the Prime Minister’s office and a Dar Rapid Transit Agency (DART) was created through a government notice on 25 May 2007.

A 130 km bus rapid transit was planned to cover over 90% of the city’s population and the project was split into six phases due to the large investment required.

The initial project cost was financed by the world bank and the bank provided $180 million for the construction of the first phase.

i. All applicants must be Citizens of Tanzania generally with an age not above 45;

ii. All applicants must have smartphones with android operating system.

iii. Applicants for position of Town Planners, Recorders, Cartographers and
Surveyors must have laptops.

v. Applicants should apply on the strength of the information given in this
advertisement;

vi. Applicants must attach their certified copies of the following certificates:-

ix. Attaching copies of the following certificates is strictly not accepted: Form IV and
form VI results slips, Testimonials and all Partial transcripts;

x. An applicant must upload recent Passport Size Photo in the Recruitment Portal;

xi. An applicant employed in the Public Service should route his application letter
through his respective employer;

xii. An applicant who is retired from the Public Service for whatever reason should not
apply;

xiii. An applicant should indicate three reputable referees with their reliable contacts;
Page 7 of 7

xiv. Certificates from foreign examination bodies for Ordinary or Advanced level
education should be verified by The National Examination Council of Tanzania
(NECTA).

xv. Professional certificates from foreign Universities and other training institutions
should be verified by The Tanzania Commission for Universities (TCU) and National
Council for Technical Education (NACTE);

xvi. Presentation of forged certificates and other information will necessitate to legal
action;

xvii. An applicant with special needs/case (disability) is supposed/advised to indicate;

xviii. A signed application letters should be written either in Swahili or English and
addressed to

xx. Only short-listed candidates will be informed on a date for interview and;

All applications must be sent through Recruitment Portal by using the
following address; http://portal.ajira.go.tz/ and not otherwise (This address also
can be found at PSRS Website, Click ‘Recruitment Portal’)

6 Job Opportunities | Nafasi za Kazi Muleba District Council ~ Drivers
Muleba is one of the six districts of the Kagera Region of Tanzania. It ...