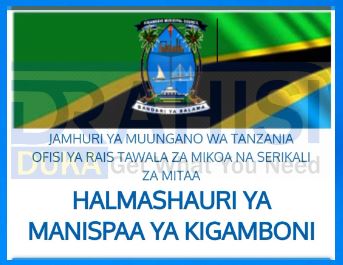 Kigamboni District is created from the mother District of Temeke and is one of the 5 Districts that make up the Dar es Salaam Region.

Kigamboni District was established through Government Announcement no. 462 of 2015 with the aim of moving services closer to citizens.

Kigamboni District has an area of ​​577.9 square kilometers equal to 57,786.8 hectares and a coastal strip with a length of 65 kilometers.

Kigamboni district was created from the mother district of Temeke through Government Announcement no. 462 of 2015 regarding the division of Districts. Kigamboni District has a size of 416 square kilometers.

Following the Population and Housing Census of 2012 Kigamboni District had a total of 162,932 people and 40,133 households.

To provide high quality socio – economic services to the community through efficient and effective use of resources and good governance for improving living standards.

A well –Educated community with better livelihood by the year 2022.

B. Enhance, sustain and effective implementation of the National Anti-corruption Strategy