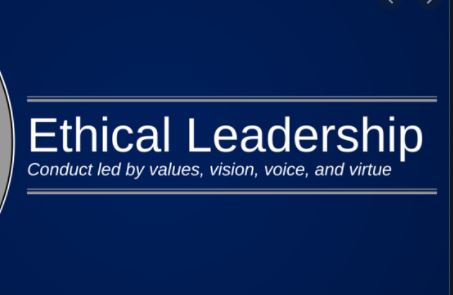 Leadership ethics among of the political and government leaders in Tanzania

For any national development depends on certain qualities such as good governance, transparency and accountability among of the government leaders as well as observance of human rights. But, these cannotoperate in vacuum also are in need of some leaders who follow some leadership ethics.

Leadership is defined as the influential increment over and above mechanic compliance with routine directive of the organization (Katz and Kahn,1978:528) In this definition leadership is seen as a process whereby one person influences others to do something of their own volition, neither because it is required nor because of the fear of the consequences of non-compliance. Leadership is therefore a process of emerging and helping others to work enthusiastically toward objectives.

But also the concept of Ethics is given out, as the codes which judge standard of conduct either good or bad in individual or group of people. It studies the system and customs as used in the life of particular group of human being especially on moral values conduct. Thus leadership ethics means leader code of conduct or standard of conducts.

The qualities of a good leader.

The following are such qualities of a good leader:-

A honest person for the community behaviors ,a non corrupt person, transparent and respectful to public resources, a good follower of code of conduct (ethics),Non emotional and ready for discussion with his/her followers ,a person who accept critics ,a non-selfish person, a stable person for the community goal attainment ,a person who encourage mass participation ,trust worth  and  the one who respects others opinions and has a convincing power to lead and struggle for accomplishment of the set goals.

Ethical qualities for a leader are as follows:-

A non-corrupt person is ethical quality of leader. A good leader should be free from corruption

A good follower of code of conduct

Leaders who portray leadership ethics significantly induces team work, the co-workers becomes confidence with their leader but also high respect and discipline is maintained, with all of these qualities unity in accomplishing certain task can be observed. Togetherness (unity) is induced with impartiality coupled with equal treatment of workers by such leader henceforth team works is attained.

Reduces the loop hole for corruption, the leader who portrays leadership ethics will be safe from corruption. Corruption is immoral act performed by many political and government leaders in majority countries in Africa. Thus ethical leaders won’t engage in corruption scandals and henceforth will reduce the government and organization or any institution losses. Ultimately development will be realized.

Also leaders who portray leadership ethics propel efficiency in production. This means an organization, agency, department or the government on which leader ethics is taken into account the efficiency is inevitable. Workers and leaders will work disciplinarily with principles or by law which is governing such organization, institution agency or a country. For example, an organization like school if the administrations and other workers follow leadership ethics, for sure, students’ performance will be realized at such institutions.

Leadership ethics is very vital in the development of a nation. With such importance mentioned, it is now very crucial to inculcate the importance of leader to portray leadership ethics among of learners. But also agencies, government departments and others should make sure that leadership code of conduct is well stipulated and put in place.

First poor provision of social services will be inevitable. If leaders do not adhere to leadership ethics inevitably will lead to poor social services provision such as education, health services, insurance, transport and communication and water supply.

Also if leaders do no adhere to leadership ethics corruption and lack of transparency and accountability will prevail. Corruptions scandals which are prevailing in our society are due to lack of leadership ethics. Consequently it leads to poor government, institution and agency performance in rendering their services.

Prevalence of protest, riots, demonstration and opposition to the government and political leaders. It has recently occurred in countries such as Egypt, Tunisia, Syria, and Yemen and at the moment in Libya. This situation and circumstances are due to lack of transparency coupled with corruption which leads to opposition from political parties, but also strike and protest from the citizen.

Lead to poor allocation of resources especially finance and human resources. Due to lack of ethics among of the political and government leaders, misallocation of resources is inevitable. Wrong people at certain occupation have been employed or people can be given favors basing on their tribe or ethnicity. But also, over expenditure of government money is witnessed in many government institutions. This reveals the facts that leaders are not adhering leadership ethics.

For human striving to control environment life skill knowledge is very important. It is life skills from which people solve their day to day problems, inculcated with behaviours which are accepted one, equipped with entrepreneurial knowledge, enriched with leadership code of conduct but also being enriched with self independence traits. All in all, psychological and social problems can be eliminated in our society.  Besides, culture of care and maintenance can be attained through life skill knowledge.