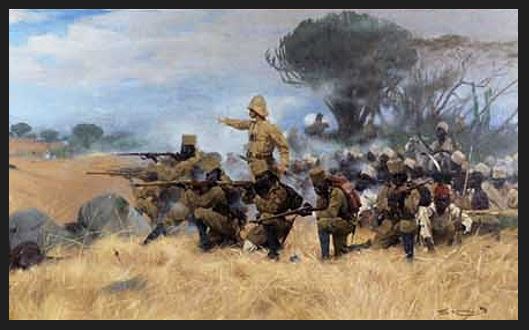 Refers to  the  war  which  was  waged  by  Southern  Tanganyika  tribes  against  the  German Colonial  rule.

It was  the  large – scale  resistance  which  covered  South  – Eastern  part  of  Tanganyika. The  war  involved  several  tribes  including  the  Zaramo, Ngindo,Luguru, Makonde, Matumbi, Mbunga  and  Ngoni  just  to  mention  the  few.

This  ethnic groups  joined  together  to  fight  against  Germans  under  the  leadership of  Kinjekitile Ngware  at  the  area  near  Ngalambe  river.

MajiMaji  war  got  its  name  for  the  Swahili  word “ Maji” which  refer  to  magic  water that  was  used  by  KinjekitileNgware  from  Rufiji  River.

He  told  the people  that  after  drinking  and being  washed  by  that  water, the  bullets  of  the  Germans  could  not  harm  anyone, The  German  bullets  could  be  changed  into  water.

The  magic  water  gave  the  fighter( Southern  tribes) the  confidence  of  fighting  against  the  Germans.

REASONS FOR THE OUTBREAK OF MAJI  MAJI  WAR

The Germans invasion interfered the traditional political structures of Southern Tanganyika societies  and  replaced  them  with rulers  such  as  Akidas  and Jumbes.

The  Matumbi  for  instance, hated  the  Arab  Akidas  who  the  Germans  gave  power  to rule  on their  behalf. The  Akidas  and  Jumbes  were  very  brutal  hence  MajiMaji  war.

2. The Introduction of Taxation

The  colonial government forced the natives to pay  tax. The  Jumbes  and  Akidas  enforced  the  collection  of taxes  by  using  excessive  force.

This  created  a lot  of  embarrassment  to  the  Africans  such  as  beating  men  in front  of  their  wives  and  children. This as  a  result  led  to the  outbreak  of MajiMaji  war

In 1902 the German governor in  Tanganyika  Julius  Von  Sodden, ordered  that  every  Akida  must  establish  a  cotton  plot  where  the  people  would  come  to  work.

The  Africans  faced  hardship  as  they  worked  for  long  time  and  were  low  wages. This eventually led to  MajiMaji  uprising.

The introduction of The cotton program in  African  areas  where  Africans  were  dispossessed  of  their  land  and  in turn  were  made  landless.

This situation made Africans  to wage  the  MajiMaji war  so  as  to  restore  their  land.

5. The character and conduct of Germans

The  Germans  were  very  harsh, brutal  and  lacked  moral  consideration  and  respect. For  instance, the  Ngindo  complained  on the  German  mercenaries  and  others  on  their  sexual  harassment  and  misbehaving  with  their  wives.

This eventually led  to the  MajiMaji  uprising.

The  Germans  imposed  the  policy of  destroying  African customs. The  Missionaries  condemned  the  initiation  ceremonies  and  circumcision  and  worse  enough  they  introduced  Christianity  religion.

KinjekitileNgware  managed  to  join  and  mobilize  several  ethnic  group  magic  water  which  created  unity  among  the  Africans  and  finally  made  them  confident  to  wage  the  MajiMaji  war.

HOW TO ANSWER HISTORY ESSAY QUESTIONS

Many  Africans  migrated  from  the  areas  which  were  affected  by  the  war. They  were  looking  for  asylum  for  their  survival.

3. Provided a lesson to the Germans

The  sacrifice  of  thousands  of  Tanganyikans  killed in  a  war  was an  important  lesson  to  colonizers  that  Africans  were  ready  to  die for  their  country’s  independence.

5. It inspired other nationalist’s fighters

MajiMaji  war  inspired    other  nationalists like  MwalimuNyerere  to  unite  all  Tanganyikan  people just  like  what  Kinjekitile  did  in  order  to  fight  for  independence  later  in  1950’s.

6. Provided a lesson to other Africans

Maji Maji inspired Other Africans to  unite  together  as  a  way  to  fight  independence. For instance the Kenyans  used  Mau Mau  movements  against  the  British  Colonial  government  in  order to demand  their  independence.

7. The Germans changed their system of ruling

The German Colonial government decided to change their system  of  ruling  by  adopting  peaceful  approaches  rather  than  coercive  approaches.

OTHER AFRICAN RESISTANCES TO COLONIAL RULE