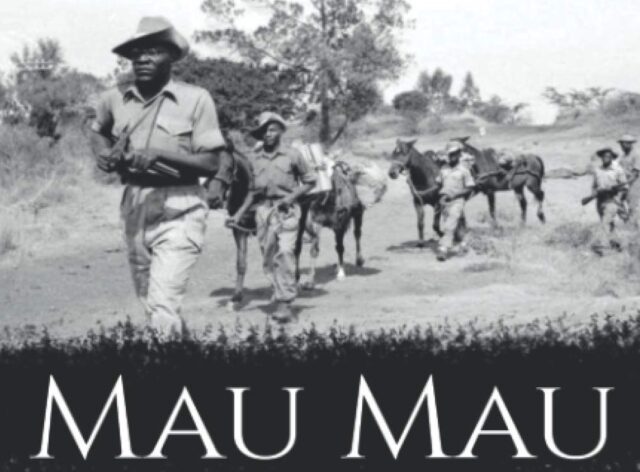 Mau Mau uprising was a movement organized by Africans as a last resort in the struggle for independence. It was an attempt by the desperate people to resist against colonial system. The movement broke out in 1905’s.

The kikuyu people initiated it and later it spread to other areas. It was aimed at attaining or deserving national freedom and independence while Majimaji resistance was against imposition of colonial rule.

Mau Mau rebellion/ war was first organized by the kikuyu tribe who were affected much by British colonial exploitation through forced labour, land alienation and introduction of taxation (multi taxes) etc, then later on Mau Mau was joined by other tribes applied Guerrillas warfare techniques hiding in the forest and attacking the British areas suddenly.

THE AIM OF THE MAUMAU WAR/ UPRISING

To sweep away colonialism: Mau Mau aimed at sending away all Europeans to their countries so as Africans to get their

To attaining equal rights and representation in executive: because Kenyans were given no or few chances in colonial government and in legislative council for example in 1994 one Kenyan named Eliad Mathieu was a member of the parliament while in 1948 only four Kenyans were members of the

Introduction of taxes: Mau Mau broke out [occurred] due to heavy taxes introduced by British government which Kenyans were forced to pay such as; matiti taxes which parents forced to pay for their mature young girls, hut tax and head

Introduction of forced labour: Kenyans fought against British government and settlers due to forced labour where by Kenyans were forced to work with no or low wages to colonial government

Interferences of culture: Kikuyu tribes had their cultural practices like female circumcision, polygamy, beliefs in many Gods etc; then the British interfered them as bad culture which made the kikuyu to

The influence of the Kenyan ex-soldiers from World War Example Dedan Kimathi.

They wanted to regain their lost independence: Mau Mau occurred because Kenyans were tired of the British colonial control which was very

THE EFFECTS / IMPACTS OF THE MAU MAU

Many people including the Kenyans and whites [British] were killed during Mau Mau hence decreased number of people.

Destruction of properties: People’s properties including houses, farms, and infrastructures were destroyed during the fighting due to burning and the use of weapons.

Family separations: Mau Mau war led to many men and women to leave their children because of the war as a result they left their children parentless hence family disintegration.

Migration of people: Mau Mau war led to many people to escape / run away to different areas due to the fear of

Hunger and famine: Mau Mau war led to the hunger and famine because people took long period to fight instead of involving in production. Also many food crops were destroyed during the

Mau Mau brought unity to the Kenyans: Mau Mau brought Kenyans together regardless of their tribal differences despite the war was initiated [started] by the kikuyu tribe.

See also  STAGES FOR THE DEVELOPMENT OF CAPITALISM

Mau Mau led to the decolonization of Kenyans: Mau Mau contributed for the Kenyan independence in

The war brought about positive political changes in Kenya.

> The British opened the door for political The Africans were given an opportunity to be represented in the legislative council.

> The colonial government allowed political associations to operate at local level e. open politics. This change was a good start for Kenyans also the Kenyans were allowed to grow cash crops i.e. in the Kikuyu land, Emu etc.

> Mau Mau led Kenyans to be given social, political and economic rights such as participating in educational opportunities etc.

STATE OF EMERGENCY OF KENYA IN 1952

State of emergency: were measures taken/ announced by the British governor known as Evelyn Baring in 1952 as a result of the outbreak of the Mau Mau war which brought negative impacts to British colonial government such as; destruction of properties, mass killing, road and railway blocking etc.

MEASURES TAKEN DURING THE STATE OF EMERGENCY

Imprisonment of political nationalist leaders like DedanKimathi, Jomo Kenyatta etc; were imprisoned so as to break unity following the state of

Forbid people to possess weapons: After state of emergency in Kenya law was passed to prevent Kenyans to carry any

Assassination of Kenyan political leaders. State of emergency in Kenya led to leaders such as DedanKimathi, Mboillela to be jailed and killed by the British government.

Burning and bombing of villages and forests: State of emergency led to Kenyan forests and villages to be burned and bombed so as to chase away freedom fighters that were in

EFFECTS/IMPACTS OF STATE OF EMERGENCY IN KENYA

It has led to removal of the kikuyu out of The state of emergency led kikuyu people who were the initiators of the Mau Mau to be chased from Nairobi so as to stop them from supporting the Mau Mau fighters.

It has led to constitutional change in Kenya: State emergency in Kenya led to the declaring of changes in the constitution for example multiracial councils formed to replace executive

Introduction of new settlements: Kikuyu were forced to live in new big areas so as to access social services easily such as health, education

Mass suffering: State of emergency led to the majority of kikuyu to suffer psychologically, feared to be

It has paved way for Kenyan independence: State of emergency contributed for Kenyans to speed up the desire for independence since Kenyans became more courageous, militant and

Generally state of emergency which declared in 1957 to react against Mau Mau war led to Kenyan independence in 1963 since Kenyans started to grant independence through diplomacy by using political parties which brought a lot of challenges in the British government hence independence.