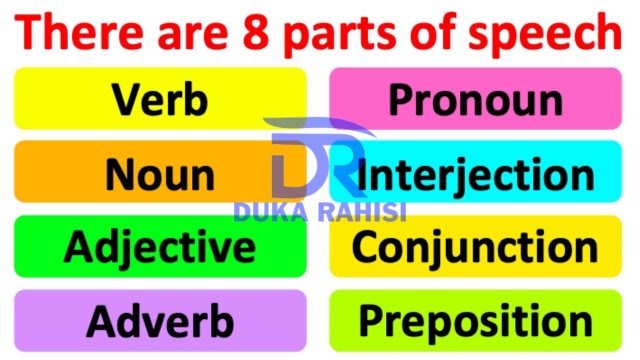 What is a Part of Speech?

Parts of speech are among the first grammar topics we learn when we are in school or when we start our English language learning process.

<> The Oxford Learner’s Dictionary defines parts of speech as “One of the classes into which words are divided according to their grammar, such as noun, verb, adjective, etc.”

<> The Cambridge Dictionary also gives a similar definition – “One of the grammatical groups into which words are divided, such as noun, verb, and the adjective”.

Different Parts of Speech with Examples 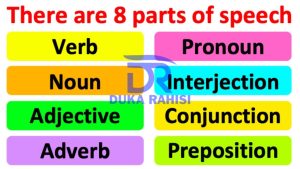 1. Nouns are words that are used to name people, places, animals, ideas and things. Nouns can be classified into two main categories: Common nouns and Proper nouns. Common nouns are generic like ball, car, stick, for instance, and proper nouns are more specific like Charles, The White House, The Sun, etc. Also, Explore Singular Nouns and Plural Nouns.

Examples of nouns used in sentences:

She bought a pair of shoes. (thing)

Is this your book? (object)

Many people have a fear of darkness. (ideas/abstract nouns)

He is my brother. (person)

This is my school. (place)

2. Pronouns are words that are used to substitute a noun in a sentence. There are different types of pronouns. Some of them are reflexive pronouns, possessive pronouns, relative pronouns and indefinite pronouns. I, he, she, it, them, his, yours, anyone, nobody, who, where, etc., are some of the pronouns.

See also  How does literature differ from other works of art?

Examples of pronouns used in sentences:

I reached home at six in the evening. (1st person singular pronoun)

Did someone see a red bag on the counter? (Indefinite pronoun)

Is this the boy who won the first prize? (Relative pronoun)

That is my mom. (Possessive pronoun)

I hurt myself yesterday when we were playing cricket. (Reflexive pronoun)

3. Verbs are words that denote an action that is being performed by the noun or the subject in a sentence. They are also called action words. Some examples of verbs are read, sit, run, pick, garnish, come, pitch, etc.

Examples of verbs used in sentences:

She plays cricket every day.

Darshana and Arul are going to the movies.

My friends visited me last week.

Did you have your breakfast?

My name is Meenakshi Kishore.

4. Adverbs are words that are used to provide more information about verbs, adjectives and other adverbs used in a sentence. There are five main types of adverbs, namely, adverbs of manner, adverbs of degree, adverbs of frequency, adverbs of time and adverbs of place. Some examples of adverbs are today, quickly, randomly, early, 10 a.m. etc.

Examples of adverbs used in sentences:

Did you come here to buy an umbrella? (Adverb of place)

I did not go to school yesterday as I was sick. (Adverb of time)

Can you please come quickly? (Adverb of manner)

Tony was so sleepy that he could hardly keep his eyes open during the meeting. (Adverb of degree)

5. Adjectives are words that are used to describe or provide more information about the noun or the subject in a sentence. Some examples of adjectives include good, ugly, quick, beautiful, late, etc.

See also  LEARN ENGLISH USES OF Other Vs Another

Examples of adjectives used in sentences:

The place we visited yesterday was serene.

Did you see how big that dog was?

The weather is pleasant today.

The red dress you wore on your birthday was lovely.

My brother had only one chapati for breakfast.

6. Prepositions are words that are used to link one part of the sentence to another. Prepositions show the position of the object or subject in a sentence. Some examples of prepositions are in, out, besides, in dront of, below, opposite, etc.

Examples of prepositions used in sentences:

The teacher asked the students to draw lines on the paper so that they could write in straight lines.

The child hid his birthday presents under his bed.

Mom asked me to go to the store near my school.

The thieves jumped over the wall and escaped before we could reach home.

7. Conjunctions are a part of speech that is used to connect two different parts of a sentence, phrases and clauses. Some examples of conjunctions are and, or, for, yet, although, because, not only, etc.

Examples of conjunctions used in sentences:

Meera and Jasmine had come to my birthday party.

Jane did not go to work as she was sick.

Unless you work hard, you cannot score good marks.

I have not finished my project yet.

8. Interjectionsare words that are used to convey strong emotions or feelings. Some examples of interjections are oh, wow, alas, yippee, etc. It is always followed by an exclamation mark.

Examples of interjections used in sentences:

Wow! What a wonderful work of art.

Alas! That is really sad.

Yippee! We won the match.

Sentences with Parts of Speech

Exercise of Parts of Speech

Let us find out if you have understood the different parts of speech and their functions. Try identifying which part of speech the highlighted words belong to.

Now, let us see if you got it right. Check your answers.