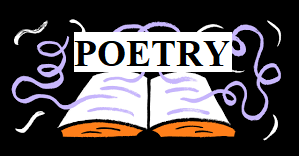 Refers to the artistic expression of ideas, experience or events using language characterized by imagery and rhythmical sounds.

Poetry is the art of rhythmical composition, written or spoken, for exciting pleasure by beautiful, imaginative, or elevated thoughts.

(a) A poet.  This person composes a poem. It can be in a written or oral form. Some of the poets are Ralf Bitamazire (I love you my Gentle one), Jwani Mwaikusa (Sun Rise) and Isaac Mruma (You are Lost).

(b) A poem. It is a piece of writing in verse form especially expressing deep feelings in an artistic language. Examples of poems include A Freedom song, Lost Beauty and Lullaby.

(c) Persona. This person speaks or narrates in a poem. This is a character of the poem. For example in the poem “A freedom song”, the persona is Atieno’s uncle.

(d) Addressee (Audience).     The persona talks to this person. For example in the poem “You are Lost” the addressee is a sister who engages in commercial sex.

(e) A verse.   It is a single line in a poem. Several verses form a stanza. The following is an example of a verse in a poem:

(f) A stanza. It is the arrangement of verses in a poem, several verses comprising a complete idea. The following is an example of a stanza.

I want a black beauty queen

With ebony thighs and huge hips

And a face dark as the night

(i) Poetry is imaginary.

(iv) Poetry is rich in figures of speech.

(i) He/she must have a great knowledge of human nature.

(ii) He/she must know the problems of his/her society.

Poetry can be narrative, reflective, descriptive, lyric, sonnet or ballad. But all these types can be classified in to two categories as follows:

(i) The closed form (Traditional poetry).

These are those kinds of poetry which strictly follow the old rules of writing a poem. Such old rules include rhyme pattern, equal number of syllables in each verse and the length of verses in each stanza.

This refers to the kind of poetry which does not follow the old rules of writing a poem. There is a great variation in the number of syllables in each verse, the length of verses and the number of verses in each stanza.

Refers to the words or phrases used in a different way from its usual meaning so as to create particular mental image or effect. The following are some of the figures of speech and their examples:

This is a figure of speech in which non-human creatures are given human characteristics or behaviour. For example in the poem You are Lost “the tenderness” has been given a human character of asking question.

This is the figure of speech in which a person says something in a way that it seems more important than it really is. In short it is the saying more than what a person means.  For example in the poem I Love you, My Gentle One the persona says “Because you posses my heart” this is overstatement because it is not possible for a person to possess the other person’s heart.

[iii] Understatement. (Litotes). This is the figure of speech in which a person says less than what he/ she actually means.

[iv] Simile. This is the figure of speech which compares two different entities or situations by using comparison entry. For example in the poem Lost Beauty the persona uses simile when he says:   “..And a face dark as the night…”

[v] Metaphor. This is the figure of speech which is used to compare two different entities or situations without using comparison entry. For example in the poem You Are Lost the persona compares himself with the tool when he says “to you I am now a tool”.

[vi] Irony. This is a figure of speech in which a person says the opposite of what he/she really means. For example in the poem Hollow Heads the persona calls his enemies Friends instead of enemies.

[vii] Satire.  This is an expression in which a person becomes ridiculous because of his/her own fool or vice. It can take the form of irony or sarcasm. The major aim of satire is to change a situation or behaviour, to educate or just to entertain through humour. For example in the poem Lost Beauty the persona uses satire by calling his black sisters “Awful fakes of White females” and “White masks”.

[viii] Sarcasm.  This refers to the bitter statement which intends to hurt or humiliating someone in order to make him or her angry or unhappy.

[ix] Euphemism.  It is a word, phrase or statement which is used instead of the one that sounds harsh, unpleasant or obscene.

[x] Symbolism.  It is a case in which an entity in a work of art refers to another different entity or situation. For example in the poem Your pain “blood” symbolizes the existence of armed struggle and sacrifice.

[xi] Apostrophe.    It is an explanation whereby a person is addressing an absent, dead or non-human creatures as if they can hear or reply.

The most common way used by poet to make their poems musical is the use of repetition. There are various kinds of repetition in poetry as follows.

[i] Alliteration.  It is the repetition of initial identical consonant of lexical item in a poetic line.

[ii] Consonance. It is the repetition of final identical consonant of lexical items in a poetic line.

Eg.  -Take your pack and pick your pack.

[iii] Assonance.  It is the repetition of a vowel sound of a lexical item in a poetic line.

[iv] Reiteration.  This refers to the repetition of words or phrases in a poetic line for emphasis or rhythmic effect.

[v] Parallelism.  It is the repetition of line which has similar structures with the same similar phrases. Consider the following example.

you love three, you can’t be free, If you love four, what for?

[vii] Rhyme. This is the repetition of sound in different words such that the words sound more or less a like (similar).

The dead never come back home

But at least once in life

They visit us in dream”

-The word home rhymes with dream.

Sometimes the poems indicate what is expressed in them. Setting can be the time, place or situation in which the poem happens.

This is what the speaker is telling the audience. Hence, it is required to explain the whole event, state or thought as told by the poet.

This is the central idea that the poet intends to express.

This is the creation of some mental picture in the minds of the readers. Some of the types of imageries are tactile (touch) imagery, Gustatory (taste) imagery, auditory (hearing) imagery, Olfactory (smell) imagery, Visual (seeing) imagery, Kinetic (movement) imagery.

This refers to the choice of words to achieve a certain effect. The poet may choose the words to show whether the persona is educated or not or a member of upper class or lower class. Consider the following last verse in the poem “Ballad of the Landlord”

This shows that the persona (Landlord) is a Whiteman.

This refers to the use of language that reveals the attitude of the speaker. The tone of the speaker can be easily identified (understood) by the use of his/her diction. The tone can be of love, hatred, seriousness, contempt, sad, pity, mockery, sarcasm, irony, satirical, exciting etc.

This is the feelings that a reader gets through the prevailing tone. In the end of a poem, the reader becomes happy, angry, sad, sympathetic, depressed, embarrassed, disappointed or excited.

PROCEDURES/METHODS USED TO ANALYZE THE POEM

When analyzing poem consider the following

Consider the Tone of the poet. The attitude or mood of the poet has great contribution to interpretation of a poem. The poet determines whether the poet is angry, happy, sad, or serious.

Consider the musical or sound features of a poem. Consider Rhyme, Rhythm, alliteration or refrain. These features are very important in poetry.

Think about possible themes. Consider the poets’ central idea of discussion. In the poem, there is one or more themes.

Consider the message of a poem. The message refers to what the poet wants the readers to know or do after reading the poem e.g. avoid child labor, misuse of power etc.

Consider the relevance of the poem. Look at the issues/themes raised in the poem. Relate what you read in the poem with what happens in your community.

Consider Language use. Study how the language has been used in molding the poem. Consider diction (choice of words), symbols and symbolism and the uses of figures of speech e.g. Metaphor, Simile, personification etc.

Comment on success or failure of the poet. Check the use of language, presentation of message and themes etc.