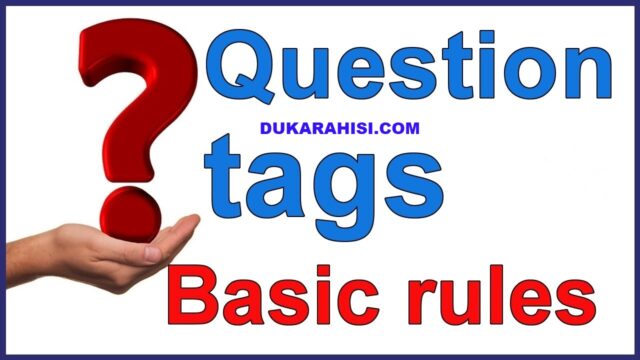 What are question tags?

It is a statement followed by a mini-question. We use tag questions to ask for confirmation. They mean something like: “Is that right?” or “Do you agree?” They are very common in English. Eg. You speak English, don’t you?

In general, question tags also called tag questions or question tails are used to elicit confirmation or affirmation for a statement from the person one is talking to.

This grammatical feature can sometimes provoke problems (especially for learners of English as a foreign language) as the question tag always has to be adapted to the previous part of the statement. This means it has to be grammatically in accordance with it.

Some examples of question tags in the English language are:

A tag question is a special construction in English. It is a statement followed by a mini-question. We use tag questions to ask for confirmation. They mean something like: “Is that right?” or “Do you agree?” They are very common in English.

The basic structure of a tag question is:

Notice that the tag repeats the auxiliary verb (or main verb when be) from the statement and changes it to negative or positive.

Look at these examples with negative statements. Notice that the negative verb in the original statement is changed to positive in the tag.

How are question tags formed in a sentence?

When it comes to the form of question tags, you need to pay attention that a personal pronoun (‘he, she, it, we’, etc.) instead of a noun is used in almost every case.

The following points demonstrate the forming in detail:

1. If an auxiliary verb (‘be, have, do’, etc.) or a modal verb (‘must, can, would’, etc.) appears in the statement, it has to be used in the tag question too. The main verb is not mentioned anymore:

The personal pronoun ‘it’ in the tag refers to the subject ‘the house’ of the corresponding sentence.

“We have got a beautiful garden, haven’t we?”

Here the personal pronoun ‘we’ is used in the tag question as well as in the subject.

“The instructions must be followed, mustn’t they?”

Be careful: ‘must not’ has a special meaning and is not usually the negative version of ‘must’. Compare the difference in the use of ‘must & mustn’t’.

2. If there is only a main verb present in the statement and no auxiliary verb, the question tag is formed with ‘do’ (the tense has to be the same):

“Ingrid likes to do a lot of sports, doesn’t she?”

“We spent too much money yesterday, didn’t we?”

3. If the statement is a request, ‘will’ or ‘would’ are usually employed:

“Pass me the sugar, would you?”

4. If the request includes ‘let’s’, ‘shall’ is the suitable question tag:

“Let’s go shopping, shall we?”

5. Whenever ‘there is, there are, there were’ for showing that something exists is used, ‘there’ needs to be applied in the question tag too:

“There weren’t a lot of things left at the sale, were there?”

Attention: If the statement includes the personal pronoun for the first person, the question tag is formed with “… aren’t I?”. In fact, this is against the general grammar rules as it actually needs to be “… am I not?”. However, in this form, that means not shortened, it is only used when something needs to be emphasized in particular. Therefore, the following version is more common: 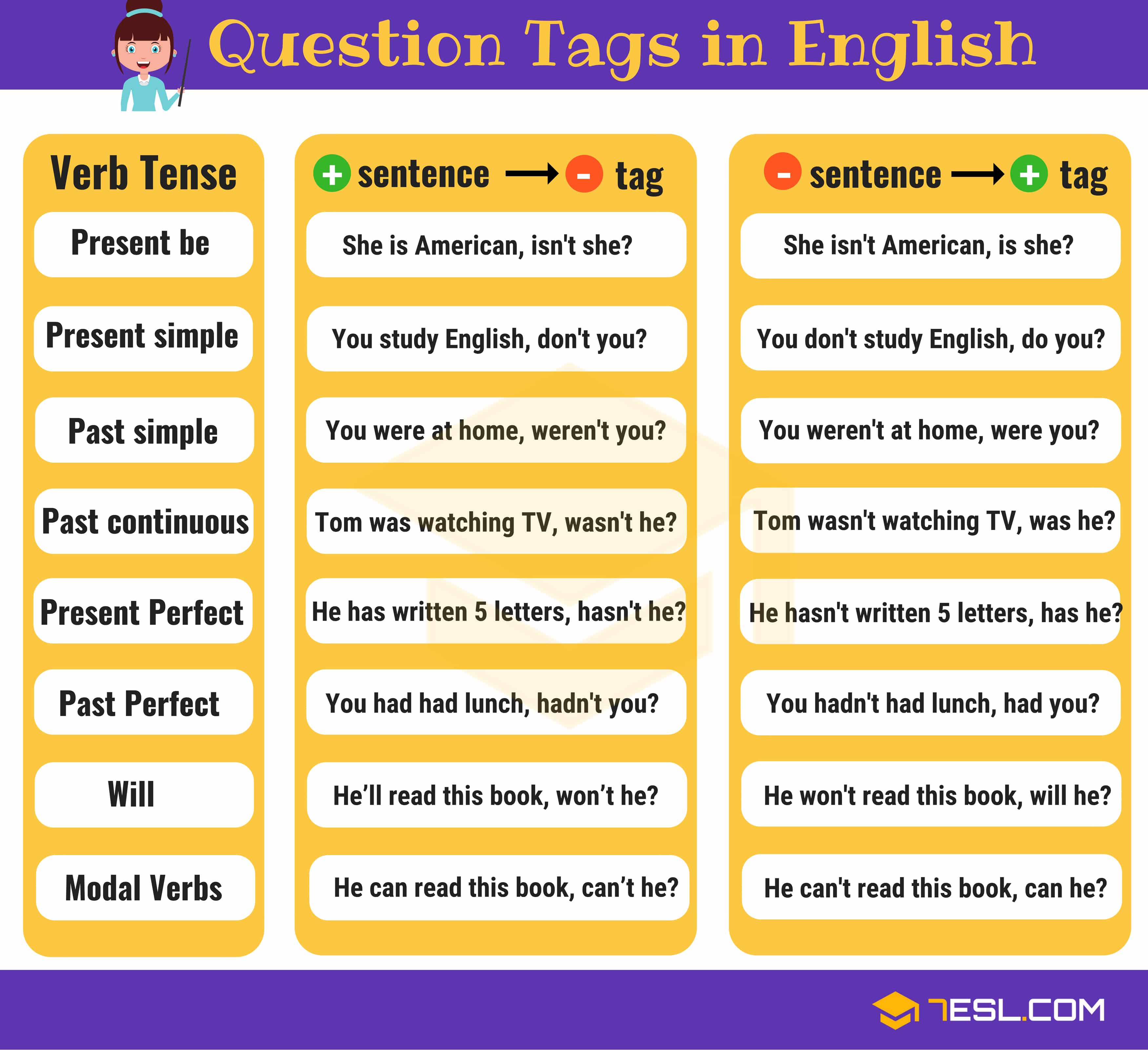 The adverbs never, seldom, hardly, rarely, … have a negative sense. We treat statements with these words like negative statements, so the question tag is normally positive.

We use the verb form are/aren’t I when the subject is the first person singular.

We use shall we after sentences with Let’s.

Sometimes question tags are used with imperatives (invitations, orders), but the sentence remains an imperative and does not require a direct answer. We use won’t you for invitations, and can you/can’t you/will you/would you for orders.

When we use the there… structure, there is reflected in the tag.

We use the pronoun they in question tags after statements with nobody/no one, somebody/someone, everybody/everyone as the subject.

7. Statements with Nothing/Something/Everything as the subject

When the subject is nothing/something, we use it in the tag question.

When the subject is this, we use it in the tag question.

We can use affirmative tag questions after affirmative sentences to express a reaction such as surprise or interest.

How do we answer a tag question?

Often, we just say Yes or No. Sometimes we may repeat the tag and reverse it (They don’t live here, do they? Yes, they do).

Be very careful about answering tag questions. In some languages, an opposite system of answering is used, and non-native English speakers sometimes answer in the wrong way. This can lead to a lot of confusion!

Answer a tag question according to the truth of the situation. Your answer reflects the real facts, not (necessarily) the question.

For example, everyone knows that snow is white. Look at these questions, and the correct answers:

In some languages, people answer a question like “Snow isn’t black, is it?” with “Yes” (meaning “Yes, I agree with you”). This is the wrong answer in English!

Here are some more examples, with correct answers:

The moon goes round the earth, doesn’t it? Yes, it does.

The earth is bigger than the moon, isn’t it? Yes.

The earth is bigger than the sun, isn’t it? No, it isn’t!

Asian people don’t like rice, do they? Yes, they do!

Elephants live in Europe, don’t they? No, they don’t!

Men don’t have babies, do they? No.

The English alphabet doesn’t have 40 letters, does it? No, it doesn’t

The sun is the centre of the solar system, isn’t it? Yes, it is.

Snow usually falls in Nigeria, doesn’t it? No, it doesn’t!

Roses aren’t always red, are they? No, they aren’t.

The earth revolves round the sun, doesn’t it? Yes, it does.

The earth doesn’t rotate on its axis, does it? Yes, it does.

Nigerians don’t like football, do they? Yes, they do!

Eagles live underground, don’t they? No, they don’t!

Mercury isn’t liquid metal, is it? Yes, it is!

The consonant sounds in English aren’t 26, are they? No, they are not.

Humans should not live by bread alone, should they? No, they shouldn’t!

The adverbs never, rarely, seldom, hardly, barely and scarcely have a negative sense.

Even though they may be in a positive statement, the feeling of the statement is negative.

We treat statements with these words like negative statements, so the question tag is normally positive. Look at these examples:

We can change the meaning of a tag question with the musical pitch of our voice. With rising intonation, it sounds like a real question. But if our intonation falls, it sounds more like a statement that doesn’t require a real answer:

Sometimes we use question tags with imperatives (invitations, orders), but the sentence remains an imperative and does not require a direct answer. We use won’t for invitations. We use can, can’t, will, would for orders.

Here is a list of examples of tag questions in different contexts. Notice that some are “normal” and others seem to break all the rules:

But you don’t really love her, do you?

Oh you think so, do you?

Well, I couldn’t help it, could I?

But you’ll tell me if she calls, won’t you?

We’d never have known, would we?

The weather’s bad, isn’t it?

You won’t be late, will you?

Nobody knows, do they?

You never come on time, do you?

You couldn’t help me, could you?

You think you’re clever, do you?

So you don’t think I can do it, don’t you? (British English)

Shut up, will you!

She can hardly love him after all that, can she?

Nothing will happen, will it?

You can do this grammar quiz online or print it on paper. It tests what you learned on the Tag Questions page.