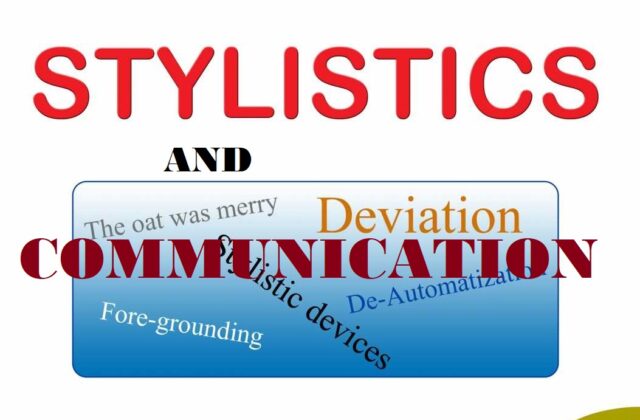 This is the study of differences or variations or language style which depends on the situation in which the language is used and the effect the user wishes to create on the person he is addressing (addressee). It is important to understand the following key words in the definition above.

This refers to this non- linguistic variable which makes the user choose a certain variety as appropriated, for example the relationship existing between a user and addressee may cause the user to choose a variety which he finds to be appropriated.

When we intend to create a good relationship with another person and therefore solicited a prompt favorable reaction we may use a polite language.

However if we are at a higher position over another person we may revert to a commanding language to ensure that things are done promptly e.g. a police inspector to a recruit.

There are 2 major types of variations of language;

a. Variation according to user(Dialect)

This is causes by people belong to a particular place or class in a large geographical or social scale.

b. Variation according to use(Register)

This is the variation that is caused by the condition placed on the user due to use the underlying situation.

Language variations according to user

The characteristics of a user may cause language variations. This is so especially when we compare users to the same language but from two
different circumstances. These lead to detect and accents.

A dialect is language variety distinguished from another by differences of vocabularies and grammar. It is usually defined as variation of language which contains typical idiosyncratic features which particular to any individual, peace and social class.

A variety of language used by people from a certain geographical setting is called a regional dialect.

A variety of language used by a particular social group upper class or lower class educated or uneducated is called sociologist.

An accent is the way a speaker pronounces a language in a way that speakers from a certain geographical area do e.g. British accent, American accent. It is a way of pronouncing the words of a language that shows which country or area a person comes from

Language variation according to use

The use for a language must choose the language elements and structure to fit in the situation requires, these varieties of language resulting from different use are called register.

The following are the names of registers according to the use;

This refers to an area of operation where the language activity takes place. This is basically the subject matter of the speech activity it could be agriculture, physics History or Geography etc.

The subject matter determines whether to use technical or non technical language.

For example: in a medical seminar, a wide range of medical vocabularies and other medical technical terms will be expected to be used.

The language choice will be more formal and language construction would therefore be expected to have longer sentences.

This refers to the medium of language activity we therefore get the written and oral modes. The difference of the two is that the written language is more organized with careful punctuation and sentence structures shine the oral language will be expected to be less organized with gap fillers pauses hesitations slips of the tongue ellipsis etc.

This refers to the relationship between user and addressee (s) it is in this that use distinguishes between polite and impolite language or formal and informal styles. Involving temporary causes permanent or intimate forms of relationship manner which one behaves.

Styles of registers identified in stylistics

i. Consultative/common core/basic style: Spoken anywhere at any times even a stranger while seeking information.

Stranger:  Yes, may I help you?

Caro:    Yes I can’t seem to find the PPF tower

Stranger:   Oh! Actually we are standing right opposite to it

Noreen speaking to her friend Irene through the phone

Husband:        Thought that was your responsibility wife stares at him then says “but am tired sweetly”

Husband:         I always tell you not to look at me like that when you ask for something

At the Transform office, Mbezi

(She takes them in Bundala’s office)

Other characteristics of formal language

This is used in particular field of discourse such as literature, religion and law. It is called frozen because it is usually never affected by changes as it retains its features.

In the field of literature, the frozen style is mostly found in poetry than in prose. In religion, it is shown by the use of special religion terminologies and archaism. In law, it is indicated by the use of legal terms. Search style is always familiar to the people who use it always.

Various features constitute some peculiar features which make them be treated as varieties to be labelled, these include;

This language variety has the highest status in the community or nation. It is a kind which is usually based on the speech or writing or of educated nature language speaker. A standard variety is generally used in the news, media and literature. It is the variety found in dictionaries and grammar and is taught in schools and to foreign learners of the language in question.

This is the informal use of words and expressions that are more common in spoken language, especially by a given group of people. Slags are always new, flashy and popular words which are usually short lived in terms of use.

It is normally used in familiar talk among peer groups but is not accepted as good language. When spoken or written language. The central reason for use of slang is desire for novelty, vivid emphasis for being knowledgeable, being up with times or a little ahead.

Example of such words include

Contract – order to kill someone

These are words or expressions which are used by a particular profession or group of people, and are difficult for others to understand. It is therefore a language of a special group profession or activity.

It is usually compared with a ling in fact, any speech that sounds strange to people who do not understand it while it is well understood by people of the special profession as doctors, lawyers and other scientists is associated to jargon.

This is a word or phrase used instead of another which is deemed to be embarrassing or unpleasant, sometimes to make it seem more acceptable. It is used to make speech less harsh or unpleasant example the word “pass away” for die short call for pee etc

a.Write a press release to the Tobacco farmers at Tabora together with their Agricultural officers concerning a disease affecting their crop and how to combat it.

b.A play written to encourage farmers at Mwika to plant more coffee due to its profitability.

– Standard language – has high status in community or nation

– Language should incite the awareness of the disease, its causes, effects and ways to   combat it.

In (b) Language should be simple.

Formal – If it involves official scenarios such as a meeting and someone with facts is addressing the people.

Persuasive – the fact coffee is likely to bring profit.

Study the Dialogue below

Uswedi   :   Forming time!! What farming time are you talking about?

Rwega    :    I mean now shouldn’t you be pruning your coffee

Uswedi   :  ha ha ha man Rwega,I thought you were a very understanding man …everyone is complaining about the coffee does not full our packets

Rwega    :  Uswedi my friend, we are fast reluctant to implement what our officers tell us.

Rwega     : where are you young beautiful ladies coming from?

Wane       : We are from SUA University we are here on field studies

We happen to overhear your conversation may we could be of help.

Rwega    :   Uswedi where are you going let us hear from them

Wane      :  It seems your having problem with coffee farming, this matter can be resolved by just using the proper agricultural skill or technique.

Atu         :  My colleague is right, the only key to a better production   as sufficient technology.

Uswedi   :   sorry what do you mean by sufficient technology

Wane       :  It is applying the proper tools and methods which can help to yield high out puts for example this village has shortage of water but
coffee can be produced here, you can employ irrigation as a solution.

Atu          :  Not only that, but also employ perfect tools and not hand hoes thus by doing so you will be able to earn more output considering the fact
that coffee is very profitable.

Rwega      :  I think you have very good ideas and i think it’s the right time to plan a seminar so that all Mwika coffee farmers will be aware.

From the above definitions communication is characterized by the following;

Tools or means of communication and categories into

From the above model a message originate from a person who is called encoder or sender, then the sender selects a language e.g. (English and Swahili) and it’s from spoken or written. Then a sender selects channels or means methods for message transition.

Finally the message reaches the receiver who decodes (interprets the message into understandable idea or thought, finally the receiver again select a medium and channels and sends a feedback to original speaker making a communication process.

i. Failure of a message to reach the intended/targeted destination Receiver.
ii. A message is misunderstanding by receiver.
iii. A message arrives to the right receiver but not timely (arrives late) and therefore it become useless.
iv. Message passed through a wrong medium or channels.
v. Sender sends a wrong message e.g. Rumors.

There are several negative effect of communication breakdown some of them include;

Effective communication can be defined as;

These are language related factors. They include
i) Proper pronunciation.
ii) Use of language according to the level of the audience.
iii) Use of right/ appropriate register or style depending on the field of study or area of  specialization e.g.: science, law, literature.
iv) Use of appropriate dialect common to the audience.
v) Being clear and use of common language avoid using bombastic words and unnecessary vocabularies.

These are factors associated with attitude interest, perceptions and only other feelings of the sender or receiver of message.

They include the following;

These are factors related to climate conditions and other environmental condition. They include
i) Noise
ii) Rainfall
iii) Wind
iv) Temperature (heat or coldness)
v) Psychological interruptions interference e.g. speech interfere, passing of people, vehicles or animals.
vi) Smell
vii) Dust and other climatic extremes
viii) Timing of information is also key to effective communication of the above are not carefully analyses e.g. we want to communicate, we may fact communicate effectively.

Effective communication has the following advantage
i) It promote unity, cooperation and solidarity in a society
ii) Effective communication promotes peace, security and order of disputes or conflict are discussed amicably and compromise is reached peaceful.
iii) It promotes social and economic development
iv) It facilitates understanding e.g. in education or learning process
v) Serves time
vi)Serves resources(financial capital)