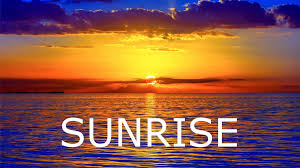 The sun has risen.

And with it the sons of the land have risen too.

Singing praises to the beauty of the sunrise.

With the determination of long-term warriors.

With the courage of a free mind

And the vigour of a clear purpose.

Wait and see what glory they bring at sunset.

How they pay homage to their land

Answ: The poem is all about the revolutionary ideas among the sons of the land (the oppressed) who rise up with ideas of challenging the enemy. They are tired of oppression, humiliation and exploitation; therefore they want to liberate themselves from all kinds of evils that they face so as to build the better future.

Qn 2. Who is speaking in this poem?

Answ: The one who is speaking in this poem is a son of the land who together with his fellows, are tired of colonial malpractice namely exploitation, oppression and humiliation, hence, they decide to wage a class struggle to end colonialism.

Qn 3. Who is the addressee (audience) of the poem?

Answ: The addressee of this poem is any fellow member of the society which is full of evils such as exploitation, oppression and humiliation.

Answ: The tone of the poem is happy; this is due to the fact that the persona is very optimistic (hopeful) that the victory is very near as they will mercilessly defeat their enemy at sunset.

Qn 5. The persona talks about “challenging the enemy” who do you think the enemy might be?

Answ: The enemy might be the oppressors, humiliators and exploiters who make people suffer from various problems like exploitation and oppression.

Qn 6. What type of a poem is this? Answ: This is a sonnet poem as it consists of fourteen (14) verses (lines).

Qn 7. What do you think the “Sunset” and the “Sunrise” probably symbolize?

Qn 8. There is one line which does not have the normal word order. Which line is it and why is that so?

Answ: The line which does not have normal word order is the fourth line which reads “Forward they go” instead of “They go forward”. The reason behind this is that, the poet wants to stress the word “forward” to encourage people to continue with the struggle.

{i} Colonialism. Colonialism is the policy or practice of acquiring political control over another country, occupying it with settlers, and exploiting it in all spheres of life such as politically, economically and socially. In this poem, the sons of the land are tired of colonial rule that is why they take an action to challenge their enemies.

{ii} Protest. This is also one of the themes of this poem. Protest is a sign of dissatisfaction which can either be active or passive. In this poem the sons of the land wage an active protest against colonial rule. They protest through armed struggle as they believe it to be the only way out to solve their problems.

{iii} Awareness. The sons of the land are aware that oppression, exploitation and colonialism are of no good to them; hence they want to liberate their land through armed struggle. If they were not aware, they could not take any action against it (Colonialism).

{iv} Sacrifice. The term sacrifice can be simply defined as the fact of giving up something important or valuable to you in order to get or do something that seems more important. In this poem the sons of the land are seen to be ready to die fighting in liberation of their country from colonial domination. This is a true patriotism which should be emulated in the society.

{v} Armed struggle.  There is an armed struggle waged by the sons of the land against their enemies. This can well be proved in the poem when the persona says:

People had to use armed struggle as they find it the only way out to solve their problems such as exploitation, oppression and humiliation.