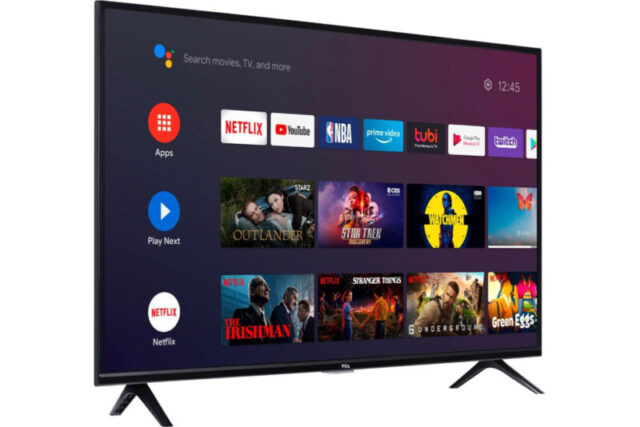 Nearly all TVs sold now are flat-screen TVs. Curved TVs screens were once more popular, but they’re increasingly hard to find now as both consumers and manufacturers prefer flat screens.

Modern flat screens have gotten thinner and bigger, and a few are designed to look like pieces of art when wall-mounted. Finding the best flat-screen TV for you all depends on your needs and what you’re going to be watching; watching a ton of sports with friends requires a different type of TV than if you watch movies alone.

Also, choosing one TV over another may simply come down to personal preference.

We’ve tested more than 100 TVs under our latest test bench, and below you’ll find our recommendations for the best flat-screen TVs available. 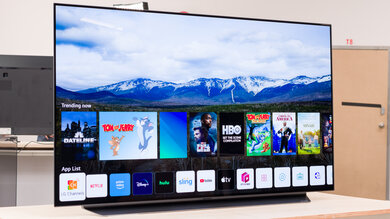 The best flat-screen TV with an OLED panel we’ve tested is the LG C1 OLED. It’s an excellent all-around TV that delivers stunning picture quality and performs well for any use.

OLEDs can turn off individual pixels, resulting in a near-infinite contrast ratio and perfect black uniformity, and there’s no blooming around bright objects on a dark background either, making it a fantastic choice for watching content in dark rooms.

It has great all-around features, whether you’re gaming or simply streaming your favorite content. The built-in LG webOS smart interface is easy-to-use and has a ton of apps available to download, and the included Magic Remote makes it easy to navigate through the menus.

It also has HDMI 2.1 bandwidth and variable refresh rate (VRR) support if you want to game with it and play tear-free, high-frame-rate games. It has low input lag and a near-instantaneous response time for a smooth gaming experience.

Unfortunately, there are a few downsides to OLEDs, like how they don’t get as bright as LED TVs. This one has okay HDR peak brightness, so while the overall HDR picture quality is excellent, small highlights don’t pop the way the creator intended.

Also, OLEDs have the risk of permanent burn-in, but it’s not an issue if you watch varied content. All in all, it’s the best flat screen OLED TV we’ve tested. 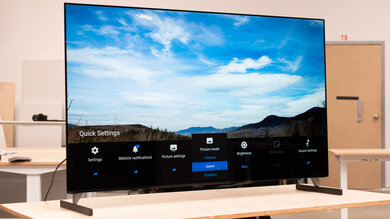 If you’re not a gamer and tend to watch lots of movies, check out the Sony A90J OLED. While it has the same gaming features as the LG C1 OLED, like HDMI 2.1 bandwidth and VRR support, it doesn’t support FreeSync, and it has higher input lag, so if you’re a gamer, you should stick with the LG.

However, the Sony has a different OLED panel that gets brighter, so highlights pop more in HDR, and it also has much better out-of-the-box accuracy, so you won’t need to get it calibrated to enjoy it to the fullest.

It upscales lower-resolution content like Blu-rays without issue, and you won’t see any banding with shades of similar colors. 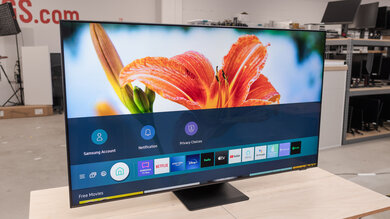 The best flat-screen LED TV we’ve tested is the Samsung QN90A QLED. It’s a flagship 4k TV with a sleek design that sits flush against the wall when wall-mounted.

It’s excellent overall and has features that should please most people, no matter the content you watch. The built-in Tizen OS is user-friendly, and you get a great selection of apps that you can download through the app store.

There are a few advantages of getting an LED TV over an OLED, like the fact that LEDs are immune to permanent burn-in, so you won’t worry about damaging the screen over time.

This TV uses Mini LED backlighting to get extremely bright, and combined with its remarkable reflection handling visibility this TV won’t be an issue in most rooms. It displays a wide color gamut and gets bright in HDR, so highlights stand out, but it only supports HDR10+ and not Dolby Vision, meaning some streaming content will be limited to HDR10 instead.

It has a great full-array local dimming feature that helps improve the already-great native contrast, but its local dimming performs worse in Game Mode than outside of it.

It raises the black level more so blacks look closer to gray. Speaking of gaming, it has HDMI 2.1 bandwidth and VRR support to reduce screen tearing. Overall, it’s one of the best flat-screen TVs we’ve tested. 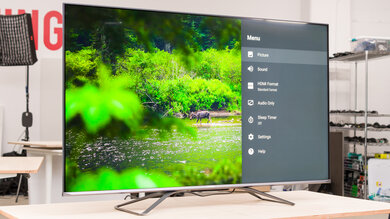 If you want something cheaper, then look into the Hisense U8G. Although it doesn’t feature Mini LED backlighting like the Samsung QN90A QLED, it still gets bright enough to fight glare and deliver an excellent HDR experience.

It even supports HDR10+ and Dolby Vision, so you won’t have to worry about which format the HDR content is in before watching it. It also has a VA panel with excellent contrast, and the full-array local dimming is great.

It has a few gaming-oriented features, like VRR support and HDMI 2.1 bandwidth, but there are a few motion-related problems in Game Mode that could get distracting, like issues of red ghosting.

If you’re in the market for the best flat-screen TV and are worried about the risk of burn-in with OLEDs, then the Samsung is a great choice. However, if you don’t need something big and prefer to spend less money, check out the Hisense. 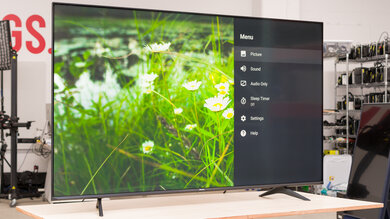 The best budget flat-screen TV we’ve tested is the Hisense U6G. It’s a great TV for most uses, with excellent contrast and outstanding black uniformity, so it looks great in a dark room as blacks look deep and inky.

It also has decent reflection handling, and it’s plenty bright enough to overcome glare in a bright room. It has impressive upscaling with lower-resolution content, has great gradient handling, and can display a very good wide color gamut.

It’s an impressive gaming TV with a great response time, resulting in clear motion with just a bit of blur behind fast-moving objects. It has low input lag for a responsive gaming experience, but sadly, it doesn’t support any advanced gaming features like variable refresh rates or HDMI 2.1 bandwidth.

There’s an Auto Low Latency Mode that automatically switches the TV into Game Mode when you play a game from a compatible device to get the lowest input lag possible.

Unfortunately, it’s a bit thicker than the other picks on this list, with a less premium design, so it sticks out a bit more when mounted on a wall. It also has a limited viewing angle, so it’s not the best choice for a wide seating arrangement. Despite its limitations, it’s a great TV overall that should please most people, and it’s one of the best flat-screen TVs we’ve tested.

Sony A80J OLED: The Sony A80J is similar in picture quality to the LG C1, but it costs a bit more, and the gaming performance isn’t as good.

LG G1 OLED: The LG G1 OLED has an incredibly thin design designed to sit flush against the wall, and it’s among the flattest of flat screens. It costs less than the Sony A90J for nearly identical performance. However, the Sony TV has better image processing, resulting in a better movie-watching experience.

Hisense U9DG: The Hisense U9DG is an excellent HDR TV that uses dual-panel technology for a high contrast ratio, but it’s only available in a 75 inch size, and its gaming performance isn’t as good as that on the Hisense U8G.

Sony X95J: The Sony X95J is a great 4k LED TV that gets bright and has accurate colors, but it costs more than the Hisense U8G, so it doesn’t offer as good value.

LG QNED90: The LG QNED90 is a premium 4k TV that features Mini LED backlighting. However, its IPS-like panel results in a lower contrast ratio than the Samsung QN90A.

Hisense U7G: The Hisense U7G has more gaming features than the Hisense U6G, but it’s too expensive to be considered budget, and it doesn’t perform as well overall as the Hisense U8G.

Hisense U6GR: The Hisense U6GR is similar to the Hisense U6G and has VRR support, but it’s a bit harder to find, and there are some issues with its upscaling.

Sony X90J: The Sony X90J delivers good picture quality, but considering its price and performance, it’s not worth getting over the Hisense U8G or Samsung QN90A.

Insignia F50 QLED: The Insignia F50 is an okay budget-friendly QLED TV that displays a wide range of colors, but for a bit more, you can get the Hisense U6G, which has a local dimming feature.