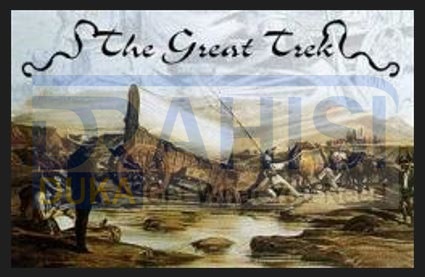 The Great Trek was a movement of Dutch-speaking colonists up into the interior of southern Africa in search of a land where they could establish their own homeland, independent of British rule.

In 1835 and 1841, 7000 Boer men, women, and children, with further 7000 Boer servants crossed the Orange River and left the colony permanently. The Boers who trekked away from the cape colony in the late 1830s were known as the Voortrekkers

This was the northward and eastward migration away from British control in the Cape Colony during the 1830s and 1840s by the Boers.

The move is viewed as a rebellion against the policies of the British government and in search of fresh pasturelands. The migrating Boers, called themselves Voortrekkers (Afrikaans: “Early Migrants”)

Having crossed the Limpopo, the Boers were divided, some wanted an outlet to the sea and therefore settled in Natal. Some decided to settle in the Highveld (an inland plateau)area.

In both areas, after initial setbacks, they were able to defeat powerful African military kingdoms through the skilled use of horses, guns, and defensive laagers / military camps (encampments)

In Natal the Voortrekkers established a short-lived republic, however in 1843, the Boer republic was annexed by the British.

In 1852 and 1854 the British granted independence to the Trekkers in the Transvaal and Transorangia (the area between the Orange and the Vaal river) regions , respectively

While the British were establishing themselves at the Cape, the Boers were penetrating further into the territory. This is because the Boers never trusted the British administration at the Cape. They saw their interests being eroded and superseded by these of the British.

Thus, they decided to move as far away as possible from the control of the British administration.

THE REASONS OR CAUSES OF THE BOER TREK

1. Desire for freedom from British control (British occupation of the cape)

British introduced their new types of administration which was seen as constraint to Dutch welfare, as they prohibited Dutch to expand any more land in the local people in interior. Moreover, Local Boer Government officials were replaced by British commissioners and magistrates appointed by the Governor.

This law was only applied to Dutch people who owned massive land. The law demanded that the owner of the land must have heavy investment, heavy money and labour power but Dutch were economically poor

So this law was geared favouring British who were rich capitalist. The solution of this was to move to the interior where the law was not applicable and where they could establish their new settlement

3. Abolition of slave trade (Restrictive laws on slavery and its eventual abolition)

This removed the final element of forced labor, slaves first were owned by the Boers, so after the coming of the British this system of slaves was established, that is why the Boers move to the interior where they could get the laborers easily who may work into their mining, farms and industries.

Dutch or Boers depended much on slaves whereby slaves were used as labour to work on their farms but the coming of British at the Cape marked the end of slavery in South Africa. In 1834, there was abolition of slavery, hence removed the final element of forced labour meaning that there was ‘equality before the law’ to labour, therefore Dutch were discontented by the way they were treated by British.

Christianity was opposed by Dutch simply because it planted to the mind of local people the question humanity, equality, fraternity and egalitarian. Dutch recognized that Christianity is there to conscintize people about their evils.

The Dutch did not belong to Anglican Church they had their own religion but British introduced it in South Africa. The religion later dominated the Cape and other areas where British settled, and then its teaching influenced local people.

Anglican Church teaching pointed out the evils that were done by Dutch farmers to local people because Boers treated inhuman indigenous people, as they did not recognize any rights and land rights to indigenous people. Therefore, Anglican revealed those evils as a result Boers decided to move from the cape.

5. Introduction of English language as official language in all colonies

The Dutch-speaking people also felt that their identity was being threatened. A series of laws proclaimed between 1823 and 1828 enabled the government to substitute the official use of Dutch with English.

When the magistrates and councils were also abolished, the colonists no longer had any say in the government and their desire for self-government increased. Therefore this action hurt Dutch greatly as Dutch felt that they are degrading or suppressed by British. The Boers are opposed to all forms of alien culture. They preferred to preserve their own customs and civilization.

Therefore, they regarded the introduction of English language as deliberate efforts made by the British to undermine their culture. This was one of the most important grievances which contributed to the outbreak of the great trek.

Beyond this, It as not easy for the old people and rural population to carry out their official transaction in English. They needed more time to learn the new official language. They hated the idea of communicating in English as it was a foreign language. Thus, they were not ready to accommodate the new language.

The new legal changes introduced by the English system of magistrates and abolished the old judicial system of the Dutch. This new system was greatly hate by the Dutch because it was unfamiliar to them, therefore its application caused a lot of inconveniences.

Also it was foreign and replaced the Dutch one which was part and parcel of Dutch cultural heritage, which the Boers were fully committed to preserve it.

7. Desire for freedom from British control

British introduced their new types of administration which was seen as constraint to Dutch welfare, as they prohibited Dutch to expand any more land in the local people in interior. Moreover, Local Boer Government officials were replaced by British commissioners and magistrates appointed by the Governor.

The Boers believed that, they were chosen race, God’s own people. Therefore, they had clear duty to God and mankind to preserve their tradition and culture. They had a responsibility to preserve their race by avoiding mixing with other races.

The great trek was therefore, regarded by the Boers as something which would provide them an opportunity to preserve the purity of their race and culture by founding a new home in a new country under their control. In joining the trek, they believed that, they were fulfilling God’s mission, to keep God’s race from contamination through intermixing with the inferior race.

THE EFFECTS OR IMPACTS OF THE BOER TREK

1. Rapid expansion of White settlements into the heart of the Southern Africa interior.

The Boers migrated interior of the Southern Africa where their anticipation was to establish new settlement as to avoid the direct control from British. Large number of Dutch moved to the interior of South Africa for example, some went to Natal region and others to Orange free state where they formed their independent states.

The interior was opened for European settlement. More and more Europeans went to settle in the interior of South Africa where they established large farms and ranches.

2. The establishment of the Boer Republics of the Natal, Orange Free State and the Transvaal.

After the movement from the Cape Dutch succeeded to establish new republican government in the interior like Orange Free State, Natal Republic and Transvaal these states were independent from British control.

In those states Dutch succeeded also to from new hybrid language known as Afrikaner language, a language that was a mixture of Dutch language, local language, French language and German language.

These were independent self governed republics created by the Boers in the northern and eastern parts of South Africa. Several of these states were established after military defeats of the local population by the Boers who had superior weapons

3. Discovery of precious minerals in the interior

The most important were gold and diamond.  In 1867 diamond was discovered along the Vaal and Orange river. In 1886, gold was discovered in Witwatersrand. The discovery of these precious metals was responsible in transforming the economy of South Africa from an agricultural one to industrial one.

4. Annexation of indigenous land by Voortrekkers

Zulu land and other indigenous land for example were annexed massively by Dutch, the Dutch wanted to posses all the fertile land found in the interior. Therefore this situation led to the creation of landless people to the indigenous people, they only remained labourers to the Boer’s famers

5. Existence of apartheid based on racial segregation.

Having occupied and established themselves in the interior of South Africa, the Boers were forced to preserve their material interests. They had to maintain themselves as a strong united group by treating the Africans as their enemies to be eliminated or as their source of cheap labor.

The Boers regarded the British as imperialists threatening their cultural and economic interests. This hostility between the Boers and the British colonizers eventually resulted to violent clashes / armed conflicts, especially when the British wanted to annex the Boer republics.

6. Acquisition of firearms by African Kingdoms of the interior.

Boers brought firearms to the interior of South Africa whereby it was easy to reach at the hands of Chiefs of Kingdoms, these firearms was later used as a defense weapons against external enemies and sometimes in conquering the neighboring states.

British suppression was a lesson to Afrikaner nationalist whereby many Dutch accumulated a lot of grievances and claims against British due to their maltreatment. Therefore, this was a catalyst to Dutch in demanding their lost freedom; they began to fight for the independence from British government.

Generally, Boer Trek created misunderstanding between the British and the Boers due to the introduction of different systems of administration and different culture which interfere with other’s culture, for example introduction of Anglicization where by the Dutch had their own way of life especially religion system which was very different from that of British.