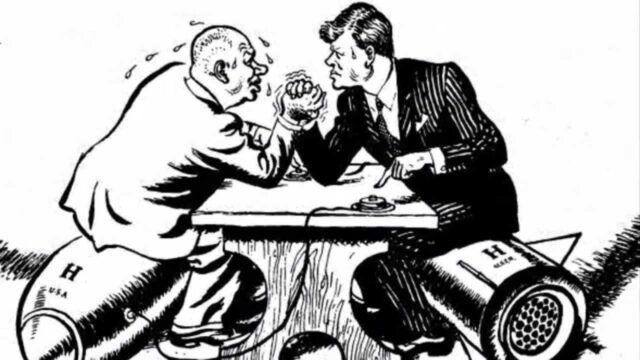 The Cuban Missile Crisis in October 1962

The Cuban missile crisis was a major direct confrontation between the USA and USSR that occurred on October 1962 over the issues of the soviet which had supplied missile in installation in Cuba.

Sometimes this is referred as a Caribbean crisis or October crisis and the Cuban missiles crisis is regarded by many countries of the world as a closest approach to nuclear war.

The Cuban crisis began when the U.S.A discovered that Cuba had secretly installed soviet missiles which was able to carry nuclear weapons and these nuclear weapons to hit targets across most of the U.S.A hence the discovery led to spark off/ increase the enmity between U.S.A and USSR whereby U.S.A imposed a naval blockage of Cuba and demanded that the USSR must remove her missiles.

The genesis/origin of the Cuban missile crisis

i. In 1960 a tension began between Cuba and U.S.A; this led to the soviet President Nikita Khrushev began planning to supply secretly missiles in Cuba which could produce/deliver nuclear weapons, assuming that U.S.A would not take any action.

ii. By 1962 the missile crisis was spread in U.S.A because of reports that USSR was channeling weapons to Cuba and in September 1962 US president John F Kennedy warned the soviets that “the greatest issue would arise” due to press of dangerous weapons in Cuba.

iii. In October 14, 1962 the US planners flying over in Cuba investigated on the ballistic missiles and on October 16, 1962 the US intelligence officers presented President Kennedy with photograph showing nuclear missile bases under construction in Cuba. The photo suggested for the preparation of two which were the medium range ballistic missile which was able to travel about 1100 neutral miles. Intermediate range ballistic missiles which was able to reach targets at distance of about 2200Nm (4100 Km) this missiles placed most major US – cities such as Los Angles, Chicago and new York city within a range of nuclear attack.

iv. Kennedy saw the evidence of nuclear capable bombers; hence Kennedy faced a situation with potentially grave consequences. However he had no clear choice on the action to take against Russia though he knew that an attack on soviet is like to attack the global nuclear war that would result in loss of millions of life of the people.

v. U.S.A promised to defend the city of Berlin in Germany which was under the pressure following the threats from the communist. East Germany in which Khrushev had threatened to take over the west Berlin and told Kennedy that he was willing to bring the matter to the point of war e.g. president khrushev set a deadline of 13 days for the resolutions of the matter.

vi. Before the Cuban missile crisis began Kennedy and his advisors believed that US nuclear superiority would prevent any aggressive soviet moves; but when the photographs of missiles arrived Kennedy and his experts agreed that the weapons might have placed in Cuba to keep USA from going to war over West Berlin. However Kennedy continued in believing in his nuclear superiority for him “doing nothing about the missiles would only increase the danger in another war threatening crisis later in the year this time over Berlin”.

vii. The Cuban missile crisis lasted only 30 days but it had very important psychological and historical significances.

REASONS FOR THE USSR LAUNCHING OF NUCLEAR MISSILE IN CUBA

i. To stop USA attempt to over throw communist government of Cuba under Fidel Castro. USA attempted to overthrow Fidel catro in two movements.

a) The bag if pigs invasion – It was an unsuccessfully action by a CIA trained force of Cuban exilar to invade southern Cuba; it was an attempt to overthrow Fidel Castro in April 1962. But the movement proved failure after being defeated by Cuban trained soldiers.

b) Operation Mangoose (The Cuban Project)

-This project was also known as special group Augmented

– It was a program of central intelligent Agency (CIA) Convert operations develop during the early years of president of U.S.A John F. Kennedy. On November 30, 1961 the aggressive convert operation was launched against the communist government of Fidel Castrol.

– There fore even that movement failed again USSR launched the Nuclear Missile in Cuba so as to threaded US interference on Cuba internal affairs.

ii. It was also a reaction toward western European and US a moment process.
USSR was threatened by the military advancement of Western Europe and the USA. Far instance in 1958 United Kingdom deployed. Thor IRBM (International Range Ballistic Missiles) Also Jupiter IRBM in Italy an Turkey in 1961. Also USA built 100 missiles having capacity to strila Moscow with Nuclear war heads.

3. Military strategic reason to USSR. Cuba is very near to USA; therefore, nuclear missile in Cuba was a serious threat to the USA.

HOW THE CONFRONTATION ENDED

The confrontation ended on October 28, 1962 when President John F. Kennedy of USA and secret agreement with Khrushcher (Nikita) of USSR.

Publicity they agreed that societ Union would dismantle their offensive weapons in Cuba and return them to societ Union, subject to UN verification in exchange for a USA public declaration and agreement to never invade Cuba.

-Secretly the US agreed that it would dismantle all us built the and Jupiter IRBMS, developed in Europe and Turkey.