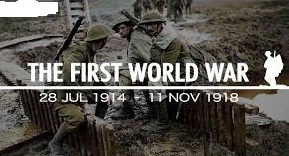 Refers to the first imperialist war that occurred in the world history whose major aim was conquest for the re-division of the world among the European imperialist powers.

It was a military conflict that took place in the world and involved many countries of Europe as well as USA and other nations throughout the world.

The war broke out on July  28th 1914 after the assassination of Archduke Francis Ferdinand in Sarajevo, Bosnia and ended on 11th November 1918 with the signing of the Armistice Treaty.

The war began as a clash between two coalitions(alliances) or military camps of European countries.

This was an alliance comprised of Germany, Austria-Hungary, Italy  and Turkey. It was developed as a result of the Germany Prime Minister Otto von Bismarck who wanted to strengthen security of his country.

Bismarck at first made an alliance with Austria-Hungary in 1879 which was called The Dual Alliance.

This was an alliance comprised of Britain, France and Russia and other supporters such as Japan, Serbia, Romania, Belgium , Montenegro and later on USA(Italy joined in 1915).

The triple Entente was formed after the French had allied with Russia and Britain had abandoned he policy of splendid isolation.

Britain abandoned her policy of splendid isolation because the Germany Naval progress made Britain to feel the need of an alliance.

In 1904, Britain and France settled their past disputes over colonies and signed the Entente Cordiale.

Although at first the agreement contained no pledges of military support, the two countries began to discus joint military plans.

In 1907, Russia joined the Entente Cordiale and this now made the alliance to be called Triple Entente.

THE OVERVIEW OF FIRST WORLD WAR

The First World war was one of the most destructive and  violent war in European history and the world at large. Although USA remained neutral and silent from the begin but later on joined the war on the side of the Triple Entente in 1917.

The conflict eventually involved 32 countries of Europe, 28 of which supported the Triple Entente. However most of these countries did not participate directly in physical fighting. The war started in Europe and then spread to the rest of the world, Africa and Asia inclusively.

The WW1 involved the whole world both directly and indirectly where Africa, Europe and Asia continents involved directly while America and Australia involved indirectly since there were no fighting in their soils though they participated by offering military equipment’s, fund as well as food to their allies.

CAUSES OF THE FIRST WORLD WAR

The causes of the First World War are grouped into two categories:

These  did not took place  at the advent of the WW1 but rather prevailed for a long period of the time.

These took place at the advent of the WW1.

During the late of 19thc  and the early of 20thc, these were several conflict s between

European imperial  powers due to expansionism. A good example of these conflicts includes:

These and others, together led to the First World War in 1914.

At the late at 19thc,balkan states in the Balkan region wanted to unify themselves so as to undergo nationalism just like other powers like Britain, France, Italy and Germany. A good example include Serbia, Bosnia, Bulgaria, Romania, Montenegro, Czechoslovakia etc.

This created conflict between big powers because some powers like Germany did not prefer  Balkan nationalism while other like Britain wanted the Balkan states to undergo nationalism.

The formation of military alliance like Triple Alliance and Triple Entente created hostility and tension between the alliances. As a result different conflicts emerged which

At the late 19thc,there was stiff competition in manufacturing deadly military

Weapons between European imperial powers .A good example was the Anglo-

(a)  Construction of powerful battleships.

After the Berlin conference ,some European powers were not satisfied  with the division of colonies. For example Germany  did not satisfy with the colonies she obtained and therefore wanted more colonies  for her interest.

This led to conflict  with other powers, for example the Agadir Crisis (1911) with France, hence the ww1 became inevitable.

The 19thc ended in Europe by a lot of suspicious and need for revenge by different nations. For instance:

Russia wanted for a long time to revenge Germany and Austria for taking the Balkans.

Austria wanted to revenge the assassination of Archduke Ferdinand.

Britain suspected of being attacked by Germany after the Franco –Prussia war.

Germany suspected France that could revenge the loss of Alsace and Lorraine.

Every European power wanted to maintain superiority over another military, economically, and politically.  For instance Germany wanted to remain the “Lion of the land”  while Britain waned to remain as the “Shark of the Sea” such ideology made other nations to struggle for recognition and this made the world peace to be at stake.

Archduke  Ferdinand (The Austrian Prince) was the heir to the Austrian Emperor, Francis Joseph.  The Archduke and his wife Sophia were sent to visit Sarajevo, the capital city of Bosnia as Archduke Francis Ferdinand was planned to become the emperor of Slavic people.

This would mean that the Slavs were to have a more equal role in the Austro-Hungarian government that wanted to dominate/govern all Slavic countries in the Balkan region which included Bosnia, Serbia etc.

However, the Slavish in the Balkan region did not want to be dominated by other powers but they wanted Nationalism and to be recognized as independent states.

As Archduke Francis Ferdinand and his wife rode in a motorcade down the street of Sarajevo, a bomb was thrown at his car. It missed Francis Ferdinand’s car but injured people in the car behind him.

Few second later, both Francis Ferdinand and his wife Sophia were dead by the assassin who was a 19 years old Serbian student name Gavrilo Princip, one of the seven assassins who had lined the parade route in the hope of killing the Archduke. All seven were members of a secret Serbian Nationalist Terrorist Society called Union of Death or the Black Hand.

After this assassin ,the government of Austria – Hungary under Foreign Minister Leopold Berchtold sent an envoy to Berlin to talk to the German Emperor William II on July 5.

Through that envoy, the Germany would give its full support to any actions that Austria – Hungary might take against Serbia.

On July 23, 1914, Austria Hungary in support of Germany gave Serbia an ultimatum (a statement of terms that must be adopted). If Serbia did not agree to all terms within 48 hours, Austria – Hungary would declare war.

1. Serbia was to explain for the assassination and bring the assassin to Austria – Hungary.

2. Serbia was to dismiss all officials which Austria – Hungary suspected to be involved in the assassination.

3. Austrian officials and police were to be permitted to take part in the investigation.

The Serbian government in full support of Russia and her allies (France and Britain) rejected some of the conditions.  Austria – Hungary in full support of Germany declared war on Serbia on July 28th 1914 (Exactly one month after the assassination).

This made also their allies to declare war between them for instance, on 29th July 1914, Germany declared war on France and on 3rd August 1914, Britain declared war with Germany hence First World War.

Germany mobilized and stationed her troops in Belgium to block and fight French troops which were advancing.  On 2nd August 1914, German attacked Belgium and this made Britain quickly to join the war on 14th August 1914 hence First World Catastrophe of 1914.

The war led to death of many people and destruction of properties.  Around 13million people died during the war while others died because of war diseases like influenza.  Also properties of millions worthy were destroyed in different parts of the world.

This was convened in Versailles, the city of Paris in France so as to solve the post war problems in Europe.  The conference also punished Germany and his allies for having caused the war.  It was called by the victory power led by Britain and France.

This was an international body formed in 1920 to sovle international disputes as well as to maintain peace and security in the universe.  It was also formed so as to prevent the occurrence of another world catastrophe.

The first World War led to women emancipation.  This was due to high demand of labour force in European industries where women replaced men in offices, industries and other social work.

The war also led to the rise of Dictatorship regimes in Europe where some countries adopted fascist ideology.  For instance in Germany Adolph Hitler with a political ideology called Nazism and Benito Mussolini in Italy came up with Fascism doctrine.

The war led to our economic depression of 1930s which the world economy.  This was because during the war production was zero and consumption was high.  So after war, European nations overproduced to compensate the losses occurred during the war hence Great Depression.

Some new states were crated through peace settlement.  For example Finland, Poland, Hungary, Estonia, Lativia etc.  these new nations were confirmed by the signing of the Brst Listovsk Treaty of 1918 signed between Russia and Germany.

The war also led to the Bolshevick Revolution in Russia as an effect of the WW1.  Because of much suffering, the Russians (Bolshevick) decided to adopt the socialist ideology by adopting Karl Marx theory of socialism so as to remove capitalism which was seen as a causative factor for the WW1.

The war led to the change in World balance of power where Britain, France and German declined as leading capitalist power and the rise of USSR in Eastern Europe and USA in America.

The war led to the emergence of civilians (a group of volunteers) who formed an organization to help the refugees and the wounded people.  A good example was the Women of the American Red Cross, and this influenced the formation of the International Red Cross.

The First World War led to the occurrence of the Second World War because it increased enmity and more problems which forced Germany under Adolph Hitler to revenge hence WW2.

The war led to the death of Africans who participated in the war.  For example in Libya, Somalia and Kenya it is believed that more than 100,000 African troops died.  Also properties like farms and food stores were heavily destructed.

The war led to re-division of African continent among the imperialist nations.  All German colonies were re-distributed among the victorious power for example:-

– Tanganyika was taken by Britain

– Was given to South Africa

The colonial government expenditure in social services were tremendously reduced because of the severe financial constraints faced in the war period.

The war led to the formation of Welfare associations in African colonies which were formed by Africans as a method to deal with colonial intensive exploitation and oppressive.

The war led to the social miseries in various parts of Africa where the war resulted into much suffering due to homelessness, displacement, famine, diseases and uncertainties.

The war also led to the introduction of colonial development schemes in African colonies in order to generate big qualities and quantities of production so as to alleviate the post – war situation.