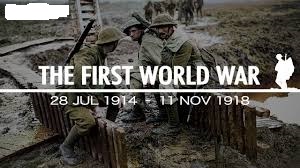 World War I was the first global military conflict or fighting happened from 28th July 1914 to 11th November 1918 that involved many of the countries of Europe as well as the United States and other nations throughout the world.

World War I was fought by two military groups or alliances that were; Triple Alliance formed by Germany, Italy, Austria-Hungary and   Bulgaria Another group were Triple Entente formed by United Kingdom, France, Belgium, Serbia, Montenegro and the Russian Empire.

The World War I WAS one of the most violent and destructive wars in European history and the general use until a second worldwide conflict broke out in 1939 ( World war II). Before that year, the war was known as the Great War or the World War.

CAUSES OF THE FIRST WORLD WAR

These are causes that took place and prepared ground for the outbreak of war long time ago before 1914.

During that time European capitalist nations were struggling for Economic demands such as raw material, markets, cheap labor and areas for investment. These demand led scrambling of European powers to African continent. Then the Berlin conference was chaired to make partition of African continent, after partitions some nations were not satisfied by the colonies given, hence this gave rise to various forms of struggle which led to fear and conflicts that led to the First World War. For stance in 1898 Britain and France confronted over Egypt and the Sudan.

After the unification of Germany, Germany intensified her military hence posing strong challenge to other capitalists nations in Europe especially Britain. Military power enabled Germany to acquire colonies in the world. This led to conflict between Germany and other powers which were also interested in colonies e.g. France and Britain.

This was the union among imperialist states in Europe in order to obtain collective defense against their enemy states. There were mainly two alliances; Triple alliance: Germany, Austria – Hungary in 1879 and Italy in 1882.Triple entente: Britain, France and Russia. These alliances were enemy to each other and competed in manufacturing of weapons and armies. In 1914 actual fighting erupted between the members of different alliances

The Franco-Prussian war of 1870-1871 led France to lose her two provinces of Alsace and Lorraine which were very potential in production of iron and coal as the result the France decided to fight in 1914 as revenge against German for grabbing her precious provinces hence the rise of the First World War.

France claimed Morocco as her sphere of influence while Germany wanted Morocco to be independent. Morocco crisis between France and Germany led to war this was the intensive conflicts between Germany and France over the ownership of Morocco in the Northern Africa. This crisis began from 1904-1911 Germany as usual wanted to

Control Morocco which by then was very rich in minerals like iron and phosphate. However from the beginning the crisis was controlled by France being supported by her ally who is British, hence led to World War.

The Balkan states particular Poland and Bosnia were demanding political independence from Austria – Hungary which was getting support from Germany. The Balkan states were supported by Russia. The contradiction between Russia and Germany made Germany to declare a war against Russia, hence the rise of the First World War.

Arm race means stiff competitions in the production of weapons. European power had created colonies as sources of markets that had to be protected. Germans and Britain competed in the production of submarine warships, for example Britain produced and lunched the super battleship called the Dreadnought in 1906.  Hence the outbreak of the First World War.

The Assassination of Austrian Leader, Archduke Francis Ferdinand and his wife in June 1914 at Bosnia city of Sarajevo by a secret Bosnian terrorist called Gavrillo Princip.  After assassination Austria Hungary sent an alteration to Bosnia (Serbia) demanding Austria officials to be permitted to investigate and punish the assassination.

Serbia refused so; Austria Hungary declared war on Serbia Bosnia in 28th July 1914, other countries joined to support Serbia and other to support Austria. Hence on the 1st July 1914 Germany attacked Serbia in the course of supporting her ally. But France, Britain, Russia and later USA attacked Germany and Austria-Hungary in order to give support to their ally (Serbia) this led to the outbreak of First World War.

FACTORS WHICH MADE FIRST WORLD WAR TO SPREAD WORLD WIDE

Existence of the system of military alliances i.e. the Triple alliances and Triple- Entete. They used warships to supply weapons by sailing across the water of the high seas

The support which has given by Asian colonies to their colonizing Masters brought war to Asia.

Russian ambitions to occupy Constantinople from turkey in order to allow easy movements of trade strops from the black sea to other parts spread the war in Asia Minor and Middle East.

U.S.A role of supplying war equipments and loans to Europe made the war to experience benefits from the Americans.

Domination of the colonies by the Colonial masters for example Cameroon, Togo, Namibia and German East Africa

Involvement of African colonies to support her European Masters brought war to Africa. For example Kenya and Uganda entered the war as British colonies fighting against the German colonies like Tanganyika, Rwanda, and Burundi.

THE EFFECTS OF FIRST WORLD WAR

EFFECTS OF THE FIRST WORLD WAR ON AFRICA.

Germany lost her African colonies. All German colonies were taken as mandate territories by the League of Nations. They were given to the winner of the war in order to prepare them for self rule. For instance Tanganyika was given to Britain in 1921. Rwanda and Burundi to Belgium and South West Africa/ Namibia to the Boers of South Africa.

Death among Africans soldiers and civilians. Many African soldiers lost their lives in the battle (field of war) over work and others due to the out of diseases such as cholera influenza, and diarrhea. It is estimated about 100,000 people died.

Destruction of colonial economy production in Africa. Production in the settler farms and mines plantations felt because lab ours were recruited as soldiers.

Intensive exploitation of African people because they wanted to recovery their economies which were ruined by the war such as land alienation, taxation and forced labor.

Decline of external trade between the European and colonies because there were no ships which sailed to Europe during and immediately after the war.

Destruction of physical infrastructure like railways, roads, harbors and ports, that were all belonged to both Africans and the colonialists.

African labour was recruited as soldiers. Peasant families lost strong people who were the workforce in the production of food and for defending the society

THE EFFECTS OF FIRST WORLD WAR IN EUROPE

The war ended in 1918 with the defeat of Germany and her allies. The Victorious nations held a peace settlement treaty called the Versailles Peace Treaty in 1919 in Paris, France. In this treaty Germany was held guilty for causing the war.

New nations were formed at Versailles e.g. Serbia and Montenegro became a new nation of Yugoslavia were its capital is Belgrade.

Germany was prevented from building warship air planes and tanks. Also the number of her soldiers was limited to 100,000 from 1,000,000.

The formation of the League of Nations in 1920 to prevent re-occurrence of another World war. The league was prepared by Woodrow Wilson the president of USA.

Alsace and Lorraine were returned to France as her former provinces rich for coal and iron.

Debts among the fighting power countries that were fighting since they borrowed a lot of money from USA e.g. Britain 4,277 millions, RUSSIA 8349 millions, France 2,977 millions.

Occurrence of the Great economic depression/slum in 1929-1933.

Many people were killed – 13 millions, while others became orphans and refugees in Europe.

Unemployment due to the destruction of industries and economic infrastructures like banks, roads, railways etc

Discuss the causes and effects of the First World War on East Africa.

What were the causes and effects of the Second World War on East Africa?

How the First World War did affected Europe Nations?

Explain the effects of the World War II in European counties.

Identify the causes of the Great Economic Depression of 1929/1933.

What were the effects of the Great Economic Depression to East Africa?

Show how Europe and USA were affected by the Great Economic depression of the 1930s.

Mention the measures taken against the effect of the Great Economic Depression on Europe.

Account for the rise of U.S.A. as the leading imperialist power after the Second World War.

How did the Great depression affect East Africa and what were solutions to the problems?

Explain the main causes of the First World War