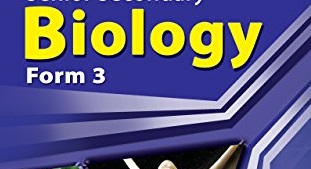 They are non-flowering but seed
bearing plants. They have vascular tissues. They are woody plants
majority being evergreen trees. Few varieties are shrubs

What are the general and distinctive features of the Division Coniferophyta?

They have secondary growth whose thickening can be observed in cross section
of a stem revealing annual rings. Secondary Growth is the result of
growth Lateral Meristems (Vascular Cambium & Cork Cambium).

Most of the members of Coniferophyta live in cool climates where they form evergreen forests. They keep their leaves year-round.

They have a large amount of internodal elongation which allows them to grow faster than the other higher plants.

They are Xeromorphic, a characteristic that help to protect them from
excessive loss of water and therefore adapt survival in extreme
habitats.

Most are large trees while a few are shrubs and other small plants.

Most of them have hard barks which protect inner softwood.

They have seeds born in cones shaped structures rather than in fruits.

They are gymnosperms which mean naked-seed plants because they produce seeds in cones rather than inside an embryo.

The leaves are needle-shaped and have a thick cuticle for protection and to decrease water loss.

The Structure of Pinus

Describe the structure of pinus

Pines are evergreen, coniferous resinous trees growing 3â€“80 m tall. The
bark of most pines is thick and scaly. They have needle like leaves.

Pines are among the most well- known coniferous trees in the world. They
thrive in temperate mountainous regions, but can also survive in
tropical spots in the northern hemisphere. Pines live relatively long
time than other coniferous plants. They may live between 100 and 1,000
years

The bark of most pines is thick and scaly, but some species have thin,
flaking bark. The branches are produced in regular whorls appearing like
a ring of branches arising from the same point.

A cross-section of pine stem has several concentric rings with distinct
borders between each ring. The center of the stem is called pith. These
rings are called annual rings because they grow seasonally and they help
a plant to undergo secondary thickening.

Generally adult pines have
needle-shaped leaves which are green and photosynthetic. The leaves are
in bundles or clusters. The leaves (cotyledons) on seedlings are borne
in a whorl of 4â€“24.

The Advantages and Disadvantages of the Division Coniferophyta

Explain the advantages and disadvantages of the division coniferophyta

Conifers are very important for our economy because of their softwood, which is
used for paper and timber, as well as cedar which many people use for
their homes because of its beauty and resistance to insects.

They have a
large economic use as softwood in furniture. In temperate and tropical
regions, they are fast-growing softwoods that will allow harvesting in
close succession.

Decoration and ceremony Many pine species make
attractive ornamentals. They are planted in parks and larger gardens.
Some varieties are suitable for smaller spaces. Pines are also
commercially grown and harvested for Christmas trees.

As medicine, Pines and cypress are rich in vitamin; their branches cones
and oils can be extracted and used as nutrient supplements.

Due to its soft texture conifers are widely used to manufacture Play wood.

As other higher plants conifers are source of heat energy, used as firewood and charcoal.

Food uses: Some species have large seeds, called pine nuts that are
harvested and sold for cooking and baking. The soft, moist, white inner
bark (cambium) found clinging to the woody outer bark is edible and very
high in vitamins A and C.

It can be eaten raw in slices as a snack or
dried and ground up into a powder for use as bread flour. Also White
Pines are rich in Vitamin A and C; flour can be made from the Pine
tree’s inner bark. By chewing bark of pine you can eliminate bad breath.
Pines can reduce the pain of skin infections by applying warm pine sap.

Angiosperms are flowering plants under kingdom Plantae and division
Angiospermophyta. This group of plants is sometimes called
Magnoliophyta.

Angiosperms are the most abundant land plants. Like
gymnosperms, angiosperms are seed-producing plants but they are
distinguished from gymnosperms by their characteristic of producing
flowers.

These plants produce fruits that contain seeds instead of cones
like it is in gymnosperms. The term angiosperm means a plant that
produces seeds within fruits.

The ovary has ovules that contain mega-sporocyte. Mega-sporophyte has four
haploid megaspores; three megaspores disintegrate and the remaining one
divides by mitotic divisions to produce eight nuclei in an embryo sac.

The three nuclei are organized into the egg whereby one cell is the egg
cell; the two others are egg helpers. Although these three cells look
are similar, only the egg cell continues to develop to an embryo sac.
The embryo sac at this stage is the female gametophyte or
mega-gametophyte.

The pollen from the anther is transported to the stigma of a flower. In the
stigma pollen tube emerges. The mature male gametophyte therefore is a
germinated pollen grain, pollen tube and three sperm nuclei. The pollen
tube grows downward toward the ovary through the style and penetrates
the embryo sac.

After discharging its contents one of the sperm nuclei
fuses with the egg nucleus and form a zygote, the other sperm fuses with
the polar cell of the ovary, forming the endosperm nucleus. This is
what is known as double fertilization. Fertilization in angiosperms
begins very soon after pollination.

Note: In gymnosperms, fertilization can occur up to a year after pollination.

They bear flowers which are reproductive structures. Fertilization takes
place between male and female flower by pollination that includes insect
pollination, wind pollination and animal pollination.

Angiosperms have underground root as well as aerial shoot system.

Angiosperms have very well-developed conducting tissues. These tissues include the
xylem and the phloem arranged in form of vascular bundles.

They have root that helps absorption of water and minerals from the soil.

Most of them have leaves that carry out photosynthesis, so they are autotrophs.

The most obvious distinguishing feature of angiosperms is the possession of reproductive structures called flowers.

They bear seeds enclosed in a carpel (the fruit). The seeds are the fertilized ovules.

They have endosperm produced after fertilization and before the zygote
undergo its first division. Endosperm has nourishing function, it
nourishes the embryo.

Their haploid gametophyte is confined inside
the ovary (female) or anther (male) of the flower, unlike the free-
living gametophytes of most other plants.

They have conducting tissues phloem and xylem. Unlike gymnosperms which have xylem tracheid angiosperms has xylem vessels.

The Classes of the Division Angiospermophyta and their Distinctive Features

Outline the classes of the division angiospermophyta and their distinctive features

Division Angiosperms is divided into two classes which are Monocotyledonae and Dicotyledonae. These two classes are distinguished from each other by their morphology and anatomy.

1. Monocots have one cotyledon (or one seed leaf)

5. Monocots have scattered vascular bundles in their stems. Typical example of monocot is a maize plant.

4. Dicots floral parts occur in fours and fives and multiple of four or five.

6. Dicots have vascular bundles arranged into a ring. A Typical example of dicot is a bean plant.

The Structure of Representative Plants Under Each Class (Monocotyledonae and Dicotyledonae) 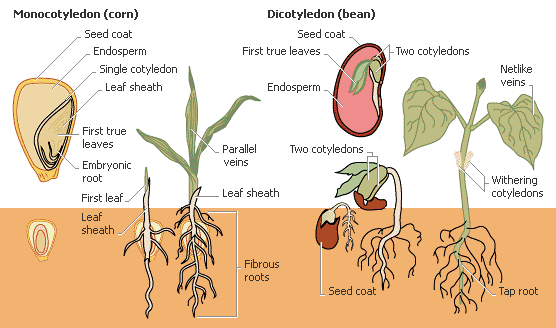 Advantages and Disadvantages of Division Angiospermophyta

Legume provides beans, several varieties of nuts
and soy. Also of potatoes, tomatoes, and peppers, pumpkins, melons and
varieties of vegetables to include cabbage and lettuce. Many fruits
oranges, lemons and grapefruits are angiosperms.

Plants belonging to grass family are the world number one feeds of
livestock. Many types of grassland in Africa are either grazed by cattle
or wild animals. Also almost all feeds consumed by human are also used
by domestic animals as food.

Angiosperms provide different varieties of wood for furniture, paper and building
materials. Carpentry and masonry depends largely on angiosperms for both
soft and hard wood.

Different varieties of fibers including cotton, flax, and hemp are important raw
materials for textile industry. Cotton is the word first class material
for clothes.

Many organic drugs are coming from angiosperm herbs. They are either industrial made or can be utilized in its raw form. Today it is believed that herbs form the best
medicine when used in their fresh form than when industrial made.

Flowers from angiosperms have great social significance as they are
used in different kinds of ceremony. Roses for instance are the most
sold flowers and they are highly purchased and used in wedding and
burial ceremonies.

Forestry is the field of study whose base depends on both angiosperms and gymnosperms. Many forests form green belts that habit different varieties of plants.

Angiosperms provide a wide range of habitats for different species of
organisms. They also serve as primary producers of energy.

Angiosperms are used to modify climate. Green belts are established in order to absorb carbon and reduce global warming.

Many sites of tourism are plants oriented. Ecotourism for instance depends largely on different plant species that host different kinds of land animals.

Some plants are poisonous when eaten by human and other animals. They
cause death to human and other living organisms. Some cassava varieties
are a good example. They have cyanide acid that inhibits cellular
respiration.

Some angiosperm varieties are drugs that can be abused when taken. Examples are marijuana, cocaine, tobacco and some caffeine varieties.

Some angiosperm varieties are bad weeds; they reduce crop yields. Some
weeds are parasites. Example, Cuscuta kilimanjari is parasitic to coffee
plantations. 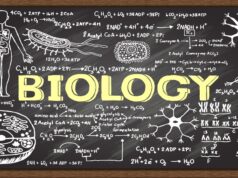 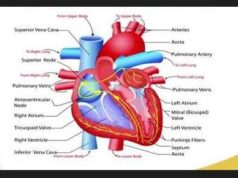 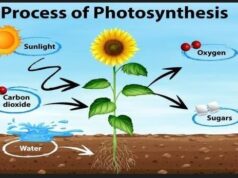 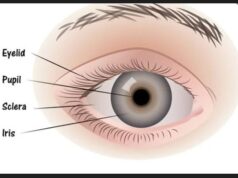 THE ROLE OF THE TUDOR MONARCHY TO THE DEVELOPMENT OF MERCANTILISM...