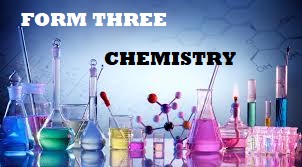 The Mole as a Unit of Measurement

The Mole with Other Units of Measurements

Compare the mole with other units of measurements

When carrying out an experiment, a chemist cannot weigh out a single atom, ion, electron, proton or molecule of a substance. These particles are simply very small. A counting unit that is useful in practical chemistry must be used.

The standard unit is called one mole of the substance. One mole of each of these different substances contains the same number of the particles (atoms, molecules, ions, electrons, protons, neutrons, etc).

That number per mole has been worked by several different experimental methods and is found to be 6.0 × 1023. The value 6.0 × 1023 is called Avogadro’s constant or Avogadro’s number and is abbreviated as L. It is named after the nineteenth-century Italian chemist, Amedeo Avogadro.

So, from the above explanation, the mole can be defined as the amount of a substance that contains as many elementary particles as the number of atoms present in 12g of carbon-12 isotope.

In real life, when dealing with large numbers of small objects, it is usual to count them in groups. The objects are grouped and counted in unit amounts. For example, we buy a carton of soap, a gallon of kerosene, a crate of soda, a dozen of pencils, a ream of papers, etc.

Some units of measurement

The mass of one mole of any substance (its molecular mass) is the atomic mass or molecular mass expressed in grams (or kilograms). For convenience, chemists prefer to express mass in grams, although the SI unit of mass is the kilogram. This is because the amount of substances which chemists usually work with in science laboratories, is quite small and if their masses are expressed in kilograms, the numbers used would be extremely small.

You can calculate the molar mass (M) of any substance by summing up the relative atomic weights of its constituents atoms. For example, ethanol, C2H5OH, contains two carbon atoms, six hydrogen atoms and one oxygen atom. So, the molar mass of ethanol can be calculated thus: Molar mass of C2H5OH = (2 × 12) + (6×1) + 16 = 46g.

In a similar way, molar masses of other compounds can be calculated. For example, the molar mass of sodium chloride, NaCl, is calculated by adding together the relative atomic masses of the constituents elements (Na = 23 and Cl = 35.5) = 23 + 35 = 58.5g (g mol-1).

It is important to note that relative atomic mass or relative molecular mass has no unit while molar masses are always expressed in grams or kilograms.

Similarly, the molar masses of each of the following substances can be calculated using values for the relative atomic masses of the elements.

Application of the Mole Concept

Known Masses of Elements, Molecules or Ions to Moles

Convert known masses of elements, molecules or ions to moles

In experimental work, chemists work with varying masses. They cannot always use one mole of a substance. The equation that links the mass of a substance to the number of moles present is:

Known Volumes of Gases at S.T.P to Moles

Convert known volumes of gases at S.T.P to moles

The volume occupied by one mole of a gas at standard condition of temperature and pressure has been scientifically determined, and it is found to be 22.4 dm3. This volume is called the molar volume of a gas. The molar volume of a gas, therefore, has the value of 22.4 dm3 at s.t.p. Remember that 1 dm3 (1 litre) = 1000 cm3. One important thing about this value is that it applies to all gases.

Therefore, at s.t.p. 32g of oxygen (O2) or 17g of ammonia (NH3) or 44g of carbon dioxide (CO2) or 40g of argon (Ar) will occupy a volume of 22.4 dm3. This makes it easy to convert the volume of any gas at s.t.p. into moles, or moles into volume. However, it is important to note that as the conditions of temperature and pressure change the molar volume will also change.

The number of moles of a given sample of gas is obtained by dividing the volume of the gas by molar volume (22.4 dm3).

N = the number of particles in that substance;

n = the amount of substance (moles); and

The molecular weights of some common substances are shown below:

The molar solution of each of these substances can be prepared by dissolving one mole of each substance in 1000 cm3 (1 dm3) of distilled water. We see, therefore, that 40g of sodium hydroxide in 1000 cm3 of solution will give a 1.0M solution. Hence, 20g of the hydroxide should give a 0.5M solution. In a similar way, we can make derivative solution concentrations ranging as follows: 0.1M, 0.2M, 0.3M, 0.4M….1M, 2M, etc.

The Concentration of Solutions

When a chemical substance (the solute) is dissolved in a given volume of solvent, we can measure the “quantity” of solute in two ways; we can measure either its mass (in grams) or its amount (in moles). The final volume of the solution is usually measured in dm3.

When we measure the mass of the solute in grams, we obtainthe mass concentration in g/dm3

First, convert the given volume to dm3

Then, work out the concentration of the solution by dividing the mass (weight) of solute (g) by the volume (dm3).

Alternatively, we could calculate the concentration straightforward without having to convert the given volume into dm3, e.g.:If 20g of the solution are contained in 100 cm3 of the solution, then the amount of solute in 1000 cm3 (1 dm3) of the solution would be

Calculations Based on the Mole Concept

Perform calculations based on the mole concept

A chemist always wants to know how much of one substance would react with a given amount of another substance. This is achieved by use of balanced chemical equations. Such equations are called stoichiometric equations.

A stoichiometric equation is the one in which the reactants and the products are correctly balanced; all the atoms, ions and electrons are conserved. Such an equation gives correct mole ratios of reactants and products in chemical reactions. This quantitative relationship is called stoichiometry.

Consider an equation for the reaction between hydrogen and nitrogen to produce ammonia:

This can be read as follows:

three moles of hydrogen reacts with one mole of nitrogen to yield two moles of ammonia.

The numbers 3, 1 and 2 are called stoichiometric coefficients. They tell us the proportions in which the substances react and in which the products are formed.

What volume of carbon dioxide (CO2) measured at s.t.p. will be produced when 21.0g of sodium hydrogencarbonate (NaHCO3) is completely decomposed according to the equation.2NaHCO3(s)→ Na2CO3(s) + CO2(g) + H2O(l)

First, find the weight of carbon dioxide that will be produced by the hydrogencarbonate.

The weight of carbon dioxide produced can be obtained from the following relation: 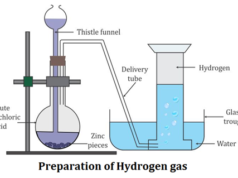 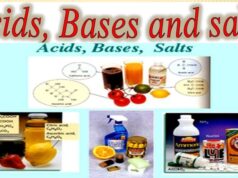