Conduction
is the transfer of heat energy through solids, for example, metals.
Generally solid substances contain particles which are close together. Each particle vibrates at one position but cannot move to another position.

Solid materials differ greatly in their ability to conduct HEAT.
Good and Bad Conductors of Heat
Identify good and bad Conductors of Heat
Solid materials differ greatly in their ability to conduct HEAT.
Good conductors
These are the substances which allows the passage of heat energy easily example all metals.
Metals
contain tiny particles called electrons (particles that carry
electricity through metals) which are free to move inside the metal and
carry energy from hotter places to colder places.
Bad conductors
These are materials which does not allow the passage of heat and electricity e.g Non – metals, woods.
How to Minimize Heat Losses due to Conduction
Explain how to minimise Heat losses due to Conduction
There are some simple ways to reduce heat loss, including fitting carpets, curtains and draught excluders.
Heat
loss through windows can be reduced using double glazing. The gap
between the two panes of glass is filled with air. Heat loss through
conduction is reduced, as air is a poor conductor of heat. Heat transfer
by convection currents is also reduced by making the gap is very
narrow.
Heat
loss through walls can be reduced using cavity wall insulation. This
involves blowing insulating an material into the gap between the brick
and the inside wall, which reduces the heat loss by conduction. The
material also prevents air circulating inside the cavity, therefore
reducing heat loss by convection.
Knowledge of Conduction in Daily Life
Apply knowledge of conduction in daily life
The difference in conductivity of various materials can be demonstrated using Edser’s apparatus

The apparatus consists of copper can with identical rods of aluminum, copper, lead and iron fixed to the bottom of the can.
The
can is supported by a metal ring which is clamped to a retort stand.
When hot water is poured inside the copper can, heat will be passed
along the rods by conduction.
After
some time, it will be observed that wax coatedon the rods will melt and
move down the rods. Note how far along the rods the wax has melted when
the apparatus reaches a steady state.
This
indicates that the materials from which the rods are made have
different thermal conductivities. Of the four metal rods, the copper rod
is observed to conduct heat more quickly than the rest.
Conduction of Heat Energy through Liquids
Convection
The Concept of Convection of Heat
Explain the concept of convection of heat
Convection is the transfer of Heat through the fluids (Liquids or Gases)

Convection in gases.
Convection
air current occurs due to the unequal Heating of the Earth’s atmosphere
by the sum. (Thus current called strong convection current). 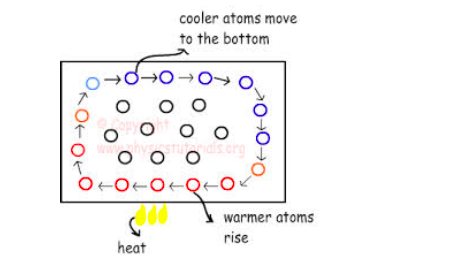 How to Minimize Heat Losses due to Convection in Daily Life
Explain how to minimise heat losses due to convection to daily life
When
you understand the effects of cold water on the body, and how the body
responds, you are far more prepared to make life-saving decisions,
either for yourself or in a rescue situation.
It’s actually quite simple: the body attempts to maintain a constant core temperature (homeostasis)
through a balance of heat loss and heat gain. Body heat is normally
gained through activities such as exercise and shivering, and also with
the application of external heat sources such as heat packs.
Convection
is the process of air or water flowing by the skin and carrying away
body heat. It’s convective heat loss that you try to prevent by staying
as still as possible in the water. Staying still, the boundary layer of
water next to the skin is heated by the body and remains undisturbed. If
you move around in the water, you disrupt that boundary layer of warmer
water, and that increases heat loss.
Once
a body has been in cold water for an extended period of time, most of
the skin is cool with little blood flow. However, there are critical
areas that are lighter (warmer) than the surrounding tissue. This is
because blood is flowing through major blood vessels, which are near the
skin surface. These areas in the neck, armpits and groin are areas of
high heat transfer. That means that these areas have high heat loss in
the cold but allow heat gain in the heat. This is why, in a rescue
scenario, the most effective rewarming often consists ofapplying
external heat directly to the armpits as well as the chest.
As
a final note, it’s important to realize that the activity of swimming
(which is naturally thought of as producing a heat GAIN), in cold water
conditions will result in increasing the blood flow to blood vessels
close to the skin, and because of conduction and convection, it can
actually increase the rate of heat LOSS and expedite the onset of
hypothermia.
Knowledge of Convection to Daily Life
Apply knowledge of convection to daily life
Domestic hot water system 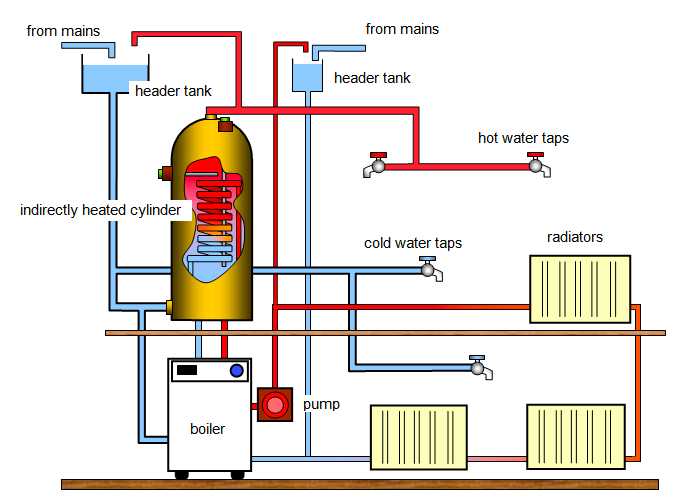 Radiation
The Concept of Radiation
Explain the concept of radiation
Radiation is transfer of heat energy from one point to another without the requirement of any material medium.
The stars including the sum illuminate the world by radiation.
Radiant
energy from the sun Reaches the Earth through the Vast empty space
?(vacuum) existing between the atmosphere and the sun.
This
energy travels with the speed of light and has similar properties to
light i.e. Radiant energy can be reflected absorbed and Transmitted.
The body which absorbs radiant energy becomes heated up and its temperature rises.
Good Absorbers and Emitters of Radiant Heat
Identify good absorbers and emitters of radiant heat
Radiant energy can be detected by means of a thermopile.
Thermopile is an instrument which convents radiant energy ( radiant heat energy) into electrical energy.
If
the terminals of the thermocouple are connect to a galvanometer by
connecting wires, a current flows in the galvanometer G when the
thermopile is directed towards a hot body, such as an electric lamp.

An
increase in deflection of Galvanometer G is observed when the current
thought the electric lamp is increased. Comparison of Radiant energy
The amount of Heat energy radiated by a body depends on:
To
demonstrate the fact that the amount of Heat energy radiated from a
body depends on the nature and area of its surface (Leslie’s cube) can
be used.
The figure below shows Comparison son of Radiant energy from different – substance.

Heat Losses due to Radiation
Minimize heat losses due to radiation
The vacuum flask was designed by sir James Dewar for purpose of stoning condenser air in the liquid state.
Now days used for keeping liquids hot over a period of Time. It would also keep liquids Cold for a long time. 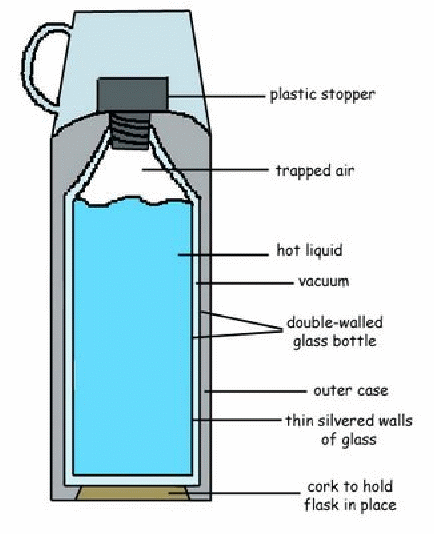 The vacuum flask consists of the double walled glass vessed with a vacuum between the walls.
The walls are silvered on the vacuum side. The flask controls convection, conduction and radiation of Heat energy.
Convection is prevented by the vacuum space between the walls and by closing the flask at the top.
Conduction
is reduced by having the container made of glass, which is a bad
conductor of heat. The stopper is made of a bad conductor e.g. cork or
rubber.
The
vacuum is also a non – conducting space. The outer glass wall is
supported by a pad of felt or cork attached to a plastic case.
Radiation
is minimized by the of silvered surfaces. The silvered surface reflects
any Radiant heat energy coming from the outside or inside the flank.