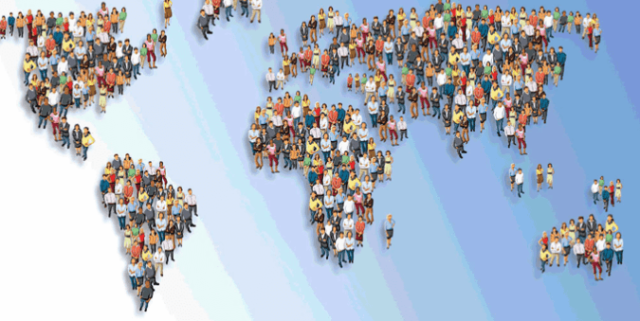 It means increase of decrease in the number of people living in a certain geographical area at a specific period of time. 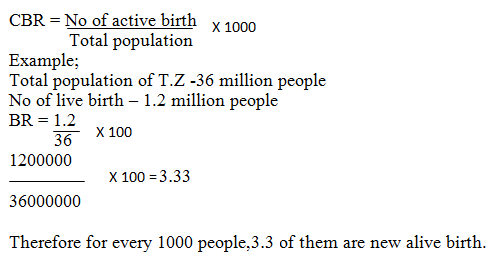 Cultural factor: In many low developed countries a big number of children is looked at as a source of wealth, prestige and increase during old age. In some cultures it is again a sign of strength.
Early marriage: in many low developed countries there is many instances of early marriages, where by girls and boys marry as early as 13 years which create a high possibility of giving birth.
Polygamous tendency: Many men have a tendency of marrying more than one wife which also contributes towards high birth rate.
Gender preference: in many low developed countries, couples have a tendency of targeting a certain gender and in the process they tend to have many kids.
Poverty: Children are looked as a source of income through bride price.
Early school drop outs due look of school fees, families cannot afford family planning facilities such as pills.
Ignorance: Many people in low developed countries are ignorant about the danger of high birth rate and also different precautions to be taken against unwanted pregnancies.
Idleness and lack of recreation facilities also contributes towards high birth rates since the couples are together most of the time.
Measures that have been taken by the Tanzanian government to control Birth rate.
Family Planning: The government has introduced family planning programs that are offered by many health centers all over the country at a very less fee.
Mass education: The government is also trying its level best to educate the masses to educate the danger of high population & high birth rate through political gathering, workshop, seminars etc under the concerned ministries.
The education policy: More schools have been constructed.
School fees have been subsidized
Sex education has been introduced.
The government also trying its level best to develop social and economic infrastructures in rural areas in order to reduce the idleness among people in rural areas.
The government has also used the law in order to reduce the birth rate as below;-The government set up sentences on rape on school pregnancies and it has also discouraged early marriage.
DEATH RATE.
This refers to a number of deaths per thousand people per annum. 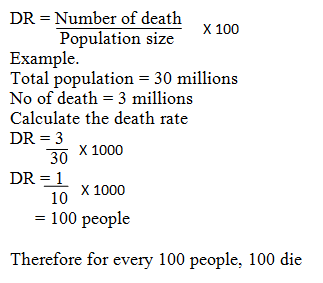 Reasons for high death rate in LDC’s
Poor or enough devices in number of ways
Lack of enough food supplies which has created a high level of famine and many have died.
Political Instability: In many LDC’s are experiencing political instabilities through wars, tribal conflicts, religious conflicts, which has result in many killings
Disease: In many LDC’s there is a lot of chronic diseases such as AIDS, TB, and Malaria etc which have claimed many.
Lack of enough medical staff
Lack of enough health center’s
Lack of enough hospital facilities
Poverty:- Poor nutrition, buy medicine
Poor sanitation and lack of clean water
Witch craft.
Population Density and Distribution.
Population density refers to the number of people per square km. 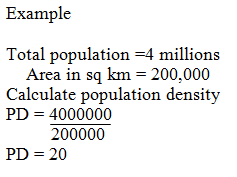 Effect of high Population Density
Negative effects
High rate of crimes.
Easy spread of diseases.
Low standard of living because of lack of enough goods & services.
Unemployment due to high supply of labor.
More pressure on social services such as schools, hospital etc
High rent due to shortage of houses.
Sanitation problems
More pressure on natural resources which result into environmental degradation.
Positive Effects
High market which will stimulate economic activities.
More labor supply.
Production will tend to be more competitive.
High government concern in areas with high population density.
Population Structure
This refers to the components of a certain population in a number of areas such as age, sex, occupation education etc.
Components of a Population Structure.
Age Structure: This is the distribution of population according to age and here population is divided into the children, adult and the old. The children and the old are regarded as the dependents (economically inactive) where as the adult are regarded as economically active. 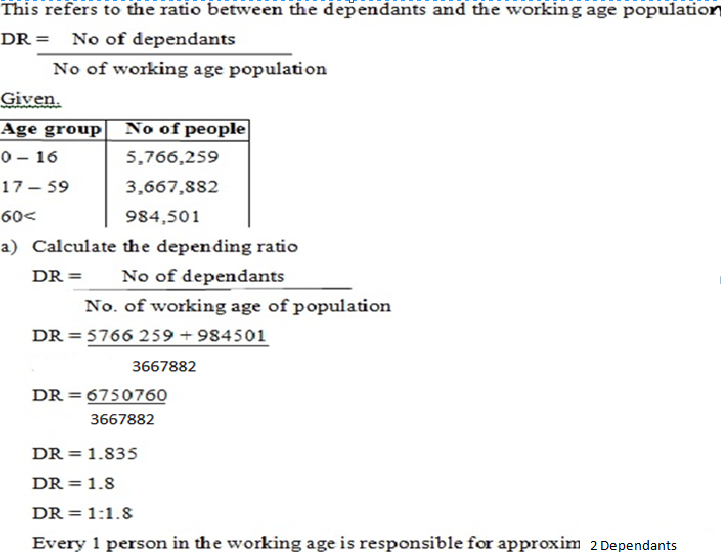 Effect of High Dependency Ratio
High level of crimes rate.
It can result into increase in street children.
It can result into increase in government expenditure.
It result into low labor force.
It results into low savings and investment.
Expectancy.
Poor nutrition
Poor sanitation
High occurrence of Disease such as Malaria
Poor Health services
Poverty
Low level of education
Sex Structure
This refers to the distribution of population on gender basis ie. Males & females – from this we can know how many males & female that compare population of a certain country
Sex Ratio

S:R=1:3
This is the ratio between males and female
Sex ratio = males & female
Assuming Female are 6 and males are 2, calculate sex ratio.
For every 1 male there are 3 females. 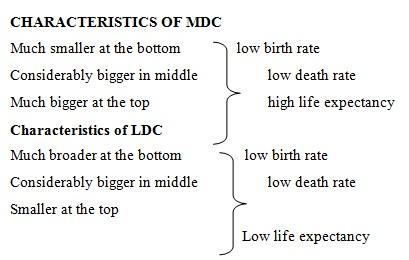 Education Structure
This shows the distribution of population according to the level of s education i.e, the educated, the un educated and the various levels of education. It is on the basis of this that we can determine the illiteracy rate & literacy rate.
Occupation Structure
This is the distribution of population according to different occupations. This helps to know the number of people employed in different professions, sectors etc. It also helps to know the number of employed & the unemployed.
Income Structure
This shows the distribution of population according to different level of income and it is from this that we can know the number of those who are low income earners, medium and high income earners.
AGING POPULATION
This is a situation when there is more and more old people as compared to the adults and the children.
This is the common feature for more developed countries due to high life expectancy.
EFFECTS OF AN AGING POPULATION
It increases the burden to the government and society as such people become dependent, therefore the government and society has to spend more in providing services to such people.
Decline in the labor force which affects population.
Decline in efficiency of work as old people are always less energetic, both mentally and physically.
Increase in demand for goods demand by the old eg. walking sticks, spectacles etc but decrease in demand for goods for children.
Limited change in the society as the old tends to be more conservative.
Limited mobility of labor as many old is not willing to move from one geographical area to another.
Spatial Population Distribution.
This refers to how population is distributed in relation to the available resources.
There are three types of spatial population distribution;-
i) Over population
ii) Under population
iii)Optimum population
Over population
This is the situation when the number of people living in a certain geographical area is greater than the resources available. Therefore under such situation the labor force available is more than the resources available.
Indicators of Overpopulation
Low standard of living
Food shortage
Housing shortage
High level of unemployment
High pressure of natural resources which tend to result into environment degradation.
Congestion on social and economic infrastructure e.g. road, school etc
Optimum population:-
This is the when the population of a certain country balances with the amount of resources that are available, therefore the country labour force size can fully utilize the available resources.
Indicators of Optimum Population
There is full employment.
There is maximum standard of living.
There is adequate provision of social services.
There is maximum utilization of resources.
There is maximum output.
Note:
It is difficult to know that a country is at optimum population at a particular point because;
The stock of resources cannot be accurately known.
The population size may as well not be accurately known.
Time also affects the size of population and the stock of resources whereby they tend to change as time goes on.
Under population:- This is the situation when the number of people in a certain geographical area is less as compared to the resources available therefore the available labor force is inadequate to maximum utilize the available resources.
Indicators of under population
Small market size.
Low standard of living.
Shortage of labor force.
Under utilization and idle resources. 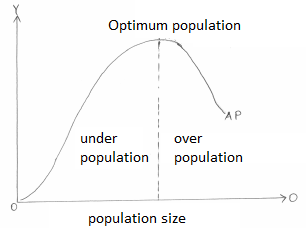 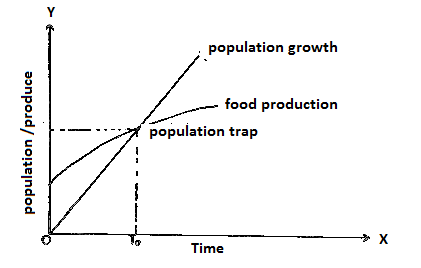 CRITICISM OF THE THEORY.
The area Malthus studied was very small to establish a theory which could be used worldwide.
Malthus did not consider technique progress which can result into increase in food production by applying better farming methods.
He ignored the role of international trade which can help to import more food in order to cover the shortage.
Malthus only looked at people as just consumers without putting into consideration that a high population size will result into more labor supply and hence increase in food supply.
Malthus looked at shortage of food as a result of high population growth rate ignoring other factors such as drought that contributes a lot to food shortage.
Malthus also failed to consider the role of transport & communication which allows food to be transported from areas of surplus to area of shortage
Despite all the above criticism the Malthusian Population Theory is of great application to many LDC’s especially in Africa on the following ground;-
In many LDC’s the population growth rate are very high due to high birth rates but when their food supplies are very low which has resulted into occurrence of starvation.
In some countries which are over populated occurrence of natural calamities such as diseases, floods, earth quakes have reduced the population size.
It is also true that land has fixed supply which is very big limitation in increasing food supply. It is also true that in many LDC’s availability of food has contributed a lot toward increase in birth rate especially in rural areas.
Optimum Population Theory
After modern economists rejected the Malthusian population theory.
Optimum population theory was established. It was stated that the population of a country must be optimum.
Optimum population is that level of population which is most desirable in view of the natural resources of the country. Optimum population is a relative term and it can be determined according to the resources available in the country.
The optimum population theory is more realistic and nearer to reality. This fact makes the Malthusian theory as incompatible these days.
Although, the Malthusian theory has been proved correct in some cases but still it is not a comprehensive or reliable theory.
The invention of new techniques of production and the development of atomic energy has made it possible to increase the population at a greater speed.
The present population trends are not very encouraging but the steps can be taken which can control the population level and increase the production of different commodities to great extent.
Different countries have been very successful to solve this problem to great extent.
Malthusian Theory vs Modern Theory
Malthus focused his attention on food production, where as the modern theory takes in to consideration economic development in all aspects
Malthusian seemed to be thinking of a maximum number for a country which if exceeded about spell misery. According to optimum theory there is no right fixed maximum.
To Malthus famine, war and diseases were indices of overpopulation. But the optimum theory tells us that in the absence of such phenomena there can be over population. It can be shown when per capital income has gone down.
Modern theory is optimistic where the Malthusian theory is pessimistic in outlook. Malthus was haunted by the fear that population would outstrip food supply and spell misery.