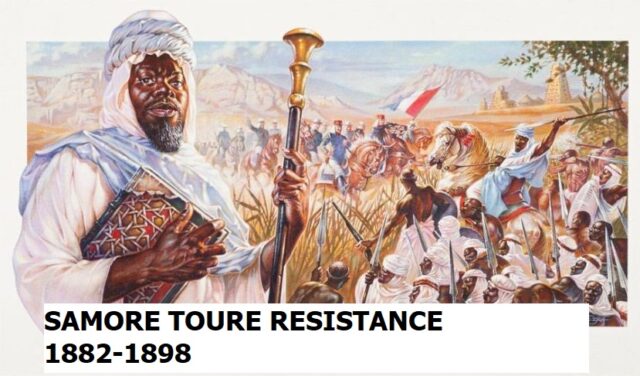 This was a resistance organized by the Mandika people of Mandika Empire under Samore Toure in present day Guinea.

Historically, Samore Toure was the leader of the Mandika people who occupied the area of present day Guinea. He was a soldier and a successful trader.

During his reign, he conquered different tribes and states which were against Islamic culture that dominated the Mandika Empire.

He managed to establish a strong military state and wanted to create strong new Mali Empire under Mandika tribe.

In previous time, he involved himself in legitimate trade with European traders.

The profit acquired from selling gold and kola nuts he used to strengthen his military force.

He was a very brilliant tactician and a military strategist something which enabled him to offer the longest resistance in the history of colonialism in Africa.

There were several reasons why Samore Toure resistance took a long period of time (almost 16 years). Some of those reasons were as follows:

SamoreToure had a strong organized army which all the time was full armed and ready to fight. This led to a long resistance.

Toure used this method in fighting the French. It was a technique of destroying crops and food stores in the place where the French marched. This was done purposely in order to make the French starve when reaching the areas. This also added to a long resistance.

Samore Toure had enough wealthy obtained from gold trade. He used this wealthy to strengthen his army something which led to a strong resistance.

Samore Toure had ability to produce his own weapons. This led to availability of enough weapons which added to a long resistance of Toure.

Samore Toure used Islamic religion to unite the Mandika people to resist the French who were Christians. This led to a strong and long resistance of Samore Toure.

The use of Guerilla

Toure used guerilla war technique to fight the French. The use of guerilla tactic made the Mandika people under Toure to resist for a long period of time because the French had no experience with guerilla fighting.

Toure had a strong security system through which enemies were often known before doing anything. Therefore, before any attack, Toure had plans to encounter it. This also added to a long resistance.

Toure and his soldiers had a fighting experience from fighting with different societies and enemies. This also contributed to a long resistance of Samore Toure.

WHY SAMORE TOURE WAS DEFEATED?

(Reasons for the defeat of Samore Toure)

Other people in Mandika Empire were against Islamic religion due to the fact that Toure used force to make people follow the religion. This contributed to weakness hence the defeat.

The French used strong weapons which were more modernized than of Toure. This is the reason why Toure could not face the French in an open battle. Therefore, the defeat of SamoreToure was inevitable.

Betray from his people

At the end Toure was betrayed by his subjects who saw it difficult to win the war. Others were tired of resisting against the French who had strong weapons.

There was serious food shortage to the people, long period of drought, and outbreak of diseases as the war continued. This also added to the defeat of Toure.

The French took advantage of presence of enmity between Mandika Empire and other neighboring empires. They made different collaboration with neighboring societies as a way to defeat Toure.

The French captured the trade caravan routes and controlled gold production zones which were sources of income to Samore Toure. This led to failure of Samore Toure to accumulate Wealthy and therefore he became unable to finance his military hence the defeat.